70 years ago, this Medal of Honor recipient sacrificed himself to save his fellow Marines

It has been 70 years since Baldomero Lopez sacrificed his life to save his Marine platoon, smothering a grenade with his body during the Koeran War’s Battle of Inchon 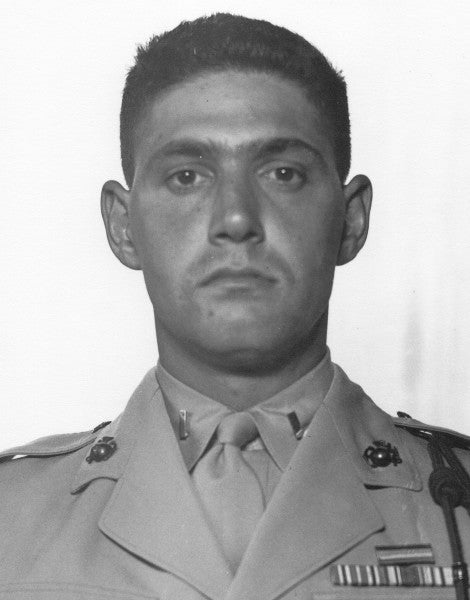 TAMPA — It has been 70 years since Baldomero Lopez sacrificed his life to save his Marine platoon, smothering a grenade with his body during the Koeran War’s Battle of Inchon.

Due to that heroism, Lopez would become Tampa’s first Medal of Honor recipient.

His name has since been memorialized throughout the area and beyond — on a downtown Tampa historic marker, on a Land O’Lakes veteran’s home and on a military container ship.

At noon on the Sept. 15 anniversary of his death, Mayor Jane Castor will be joined by Councilman Luis Viera, historian E.J. Salcines and others to once again celebrate Lopez outside Tampa City Hall.

“He is more than a hero. He is our hero,” said Salcines, 82, who for decades has led the effort to keep alive Lopez' name. “He is Tampa’s hero and, as the son of Spanish and Italian immigrants, he is a Latin hero. That is very important because when I was a child who was also the son of immigrants, I wanted to be like him.”

That’s a sentiment not lost on other generations of Tampa Latinos.

Born and raised in Tampa, Lopez was known as “Baldy” among his family and friends and considered one of the brightest — and most bashful — students at Hillsborough High School, according to a documentary produced and written by Rex Gordon.

Inspired by the attack on Pearl Harbor to join the high school’s Reserve Officer Training Corps, Lopez was told he was too scrawny to be a marine. Undeterred, he started a diet and workout program to bulk up.

“He fought hard to fight hard in a time of war,” Viera said. “He worked hard to wear the uniform of a Marine.”

Involving around 75,000 troops and more than 250 naval vessels under the umbrella of the United Nations Command, the Battle of Inchon was the largest amphibian invasion since D-Day.

A war correspondent snapped a photograph of Lopez leading his men over a large seawall.

As Lopez then attempted to throw a hand grenade, he was shot in the shoulder. Too wounded to attempt to throw the live grenade again, he instead cradled it under his body and absorbed the full impact.

“He died to save lives,” Salcines said.

Shortly after his death, Lopez' parents received a letter noting his heroism from Gen. Douglas MacArthur, commander of the United Nations forces. On Aug. 30, 1951, at a ceremony in Washington, D.C., they were presented his posthumous Medal of Honor.

“And then total silence,” Salcines said. “Dormant. Forgotten. Ignored. His name was rarely mentioned. That was unacceptable.”

Salcines worked with historian Tony Pizzo to have the downtown marker memorializing Lopez erected in 1981 on the corner of Madison Street and North Marion Street.

“That got the ball rolling,” Salcines said.

A Seffner school was named for Lopez in 1983, the cargo ship in 1985, the veteran’s home and a local Korean War Veterans Chapter each took his name in 1999, and a statue of Lopez was dedicated in Ed Radice Park in 2016.

“We should never stop memorializing Baldomero Lopez because he represents the best in us,” Viera said. “One of the greatest sins an American can commit is to forget where you came. We are a nation of immigrants. He was a son of immigrants who worked and toiled hard just to become a Marine and have the opportunity to serve his country in uniform during a time of war. That is powerful.”