Rep. John Joyce’s House Resolution 7835 would authorize President Donald Trump to award the Medal of Honor to Lt. Eric Fisher Wood Jr., who died during the Battle of the Bulge 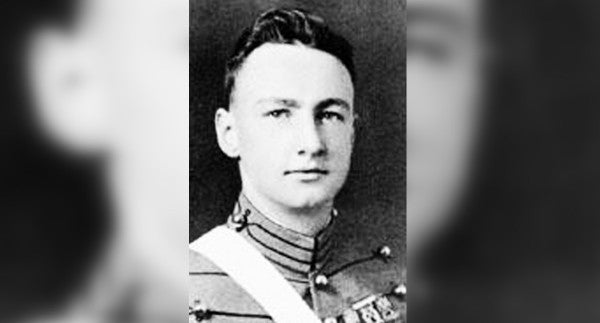 U.S. Rep. John Joyce announced Thursday that he has introduced legislation that would award the United States’ highest military honor to a World War II hero from Bedford County.

Joyce’s House Resolution 7835 would authorize President Donald Trump to award the Medal of Honor to Lt. Eric Fisher Wood Jr., who died during the Battle of the Bulge. After becoming separated from his unit, Wood gathered a group of allies and led a guerrilla campaign that is credited with killing more than 200 Nazi soldiers.

When he was found dead in the forest outside the village of Meyerode, Belgium, in January 1945, he was surrounded by the bodies of seven dead Nazis; it’s believed he killed all of them before succumbing to his injuries.

“Lt. Eric Fisher Wood Jr. was an American hero, and it is my privilege to recognize his extraordinary service and sacrifice for our nation,” Joyce, R-Blair, said in a press release. “His gallant actions undoubtedly saved American lives and aided the war effort. On the Western Front, Lt. Wood gave his last full measure of devotion to defend our liberty and American values. … By awarding Lt. Wood the Medal of Honor, we can ensure that this outstanding Pennsylvanian is remembered and honored for years to come.”

Wood was born in 1919 in California, but grew up on a farm in the Bedford area after his family moved there in the 1920s. His father, Eric Fisher Wood Sr., was a co-founder of the American Legion and a notable architect whose best-known work today is the tomb of President Warren G. Harding.

Wood attended Valley Forge Military Academy and Princeton University and served in the Pennsylvania National Guard’s Artillery Reserve before being called up to active duty. He was serving with an Army artillery battalion in the Ardennes Forest in December 1944 when German forces launched the counter-offensive campaign now known as the Battle of the Bulge.

Wood’s unit faced a heavy German presence, and he became separated from his men after a skirmish and found himself alone in the woods. Over the next few days, he gathered together a small band of American soldiers who had been separated from their own units. For several weeks, the group harassed German patrols and worked to cut their lines of communication and supply, Belgian witnesses later said.

“Cut off and surrounded behind enemy lines, Lt. Wood mounted his own personal guerrilla war over the course of several weeks against the Wehrmacht, frustrating and slowing the German advance and helping prevent American forces from being overrun,” said retired Marine Corps Col. Stuart Helgeson, president of Valley Forge Military Academy and College, Wood’s alma mater.

Wood was found dead on Jan. 23, 1945. The actual date of his death is not certain; the Army officially lists it as Dec. 17, 1944, the day he went missing from his unit, but Belgian witnesses would later testify about his exploits in the weeks afterward.

Wood’s son, Eric Fisher Wood III, wrote a letter thanking Joyce and the other leaders of the effort to award the Medal of Honor to Wood.

“The loss of a father I never met has been a constant in my life,” Wood III wrote. “The loss of a father to a war of great purpose and meaning gives me some sense of peace. Every time my father is honored, I feel a little closer to him. During these moments, I remind myself that his life had true meaning.

“He went above and beyond the call of duty at a difficult time in the history of our nation. He went to battle to help the vulnerable citizens of the world overcome atrocities that many will never even fathom of seeing or experiencing. There is no sacrifice that matters more than the sacrifice of one’s life.”