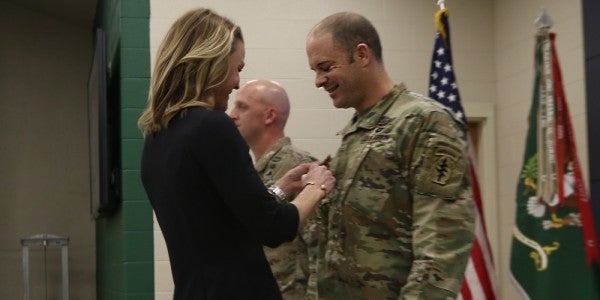 The Green Beret received the nation's highest award for valor on Oct. 30 for his heroism during an intense 2008 battle in Afghanistan's rugged Shok Valley.

“Today, we recognize a great soldier who is incredibly humble,” Col. Nathan Prussian, commander of 3rd Special Forces Group, said during the ceremony at Fort Bragg, North Carolina, according to a news release from the command. “There is not a more deserving person in the force to receive a promotion of this magnitude.”

Nearly 12 years have passed since Williams distinguished himself in battle in a way that few warriors do.

Williams was originally awarded a Silver Star for his actions during the April 6, 2008, battle, but a Defense Department review decided it should be upgraded to the Medal of Honor.

His Special Forces team and a force of Afghan commandos had air assaulted into the Shok Valley on a daring mission to kill or capture a high-value target in a remote village about 10,000 feet up the side of a mountain.

The mission got off to a bad start when enemy forces opened fire on Williams and his fellow commandos soon after they arrived. One of the interpreters was killed instantly, and the mission force was soon struggling for survival — defending a small patch of ground on the edge of a 100-foot cliff.

Two Green Beret sergeants were soon hit by enemy fire, but Williams never lost his poise under fire, according to his fellow soldiers. He calmly and bravely fought off enemy attacks while helping to lead the wounded down the steep terrain to a landing zone for helicopter rescue.

The enemy assaults were fierce and forced the Green Berets to call in roughly 70 danger close air support missions that included Army AH-64 Apache gunships, Air Force F-15 Eagles, A-10 Warthogs and even a strike from a B-1 Lancer bomber to keep from being overrun while moving the wounded to medevac helicopters.

There were other acts of heroism during that ferocious battle. Green Beret Staff Sgt. Ronald Shurer II was awarded the Medal of Honor in 2018 for the courage he displayed as the team medic on the operation.

After the promotion order was read at the ceremony, Williams' wife, Kate, pinned the new rank onto her husband's chest, according to the release.

“It's been an honor to serve at 3rd [Special Forces] Group and rise through the ranks,” Williams said in the release. “I am looking forward to continuing to lead and serve the regiment and do the best I can to develop, mentor, advise, and bring up Green Berets.”