Medal of Honor recipient Ron Rosser, who charged into enemy trenches during the Korean War, has died

Retired Army Master Sgt. Ronald Rosser, who earned the Medal of Honor in Korea by charging three times alone into enemy trenches to fight off the Chinese and save the wounded, died Wednesday at age 90 in Bumpus Mills, Tenn 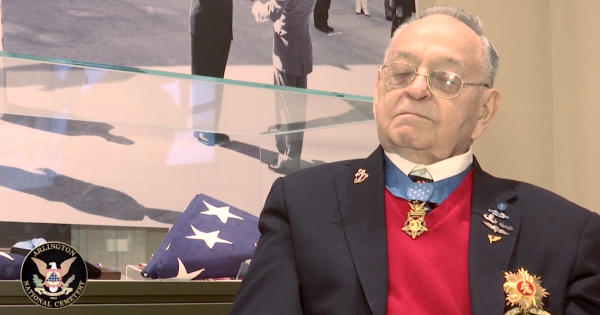 Retired Army Master Sgt. Ronald Rosser, who earned the Medal of Honor in Korea by charging three times alone into enemy trenches to fight off the Chinese and save the wounded, died Wednesday at age 90 in Bumpus Mills, Tenn.

Rosser served in the post-World War II Army from 1946-1949 in Japan and Germany, and re-enlisted in June 1951 with one purpose in mind: revenge. His younger brother, Richard, had been killed in Korea while serving with the 1st Cavalry Division in February 1951.

He initially was sent to Japan, but volunteered for combat and fought with officers to get to the front lines, eventually serving with Company L, 38th Infantry Regiment, 2nd Infantry Division.

“The Army couldn't believe that's what I wanted, but I made up my mind that you can't kill my brother and get away with it. It was kind of a revenge-type of thing,” Rosser said in oral histories for Arlington National Cemetery and the Congressional Medal of Honor Society.

His unit participated in actions at places that came to be known as “Heartbreak Ridge” and “Bloody Ridge.” Then on Jan. 12, 1952, Company L was ordered to take a hill occupied by the Red Army near the town of Ponggilli.

Rosser estimated that about three battalions of Chinese troops were on the hill in heavily fortified positions. The attack began with 170 men from his company, in temperatures reaching 20 degrees below zero.

The attack stalled about halfway up the hill.

“They were dug in. We were coming after them. They just cut us to pieces,” Rosser said. He handed the radio he was carrying to another soldier and charged alone to a trench line, stopping at an outcropping.

According to the oral histories, Rosser said he thought to himself: “Well, I went through a lot of trouble to get here — no use wasting the whole day. I let out a war whoop and jumped in the trench. I just charged straight into them.”

His Medal of Honor citation said that Rosser “charged the enemy positions armed with only a carbine and a grenade. Gaining the top of the hill, he killed two enemy soldiers, and then went down the trench, killing five more as he advanced.”

It was hand-to-hand at times, Rosser said.

“The Chinese piled onto me. I beat them off me,” he said. He kept firing, sometimes using his weapon as a club. When he ran out of ammunition, he returned to his own positions twice to reload, and attacked twice more.

“All I was trying to do was protect the men I was responsible for,” Rosser said. He feared that if he didn't attack, the Chinese troops would come down the hill to kill the wounded.

“I was trying to keep them off our wounded,” he said. “The purpose of me doing all that crazy stuff was trying to stop them from doing that.”

As Company L withdrew from the hill, not a shot was fired at them, Rosser said.

“Personally, I think they were glad to see us leave.” His medal citation said he had killed at least 13 of the enemy, but Rosser estimated it was more than 40.

President Harry S. Truman awarded Rosser the Medal of Honor in a June 1952 ceremony in the Rose Garden of the White House. Rosser recalled Truman fumbling with his glasses a bit to read the citation before telling him, “Personally, I'd rather have [the medal] than be president.”

He said he was unfamiliar at the time with the traditions of the medal. Somebody at the White House told him that officers would now have to salute him: “I said, 'You're kidding me.'”

Rosser remained in the Army until 1968, and tried once again to volunteer for combat — for the same reason as he did the first time. Another brother, Marine Pfc. Gary Edward Rosser, had been killed in action in Vietnam in 1966. The Army turned down Ron Rosser's request.

Rosser left the Army as a Sergeant 1st Class, and later was promoted to Master Sergeant. Army Secretary Ryan McCarthy said in a Twitter post Friday that the Army “grieves the loss of a true hero, Medal of Honor recipient, SFC Ronald E. Rosser.”

Rosser was born in Ohio, the son of a coal miner and the eldest of 17 children. He would later joke that he joined the Army when his mother gave birth to the 16th and 17th children — twins.

He said he decided: “There goes my place at the table. I'm joining the Army.”

After leaving the Army, Rosser settled in West Palm Beach, Florida, and earned a degree at Florida Atlantic University. Over time, he would work as a security guard, small-town police chief, letter carrier, construction foreman and history teacher.

“As you get older, you realize you're carrying an honor that represents a lot of people,” Rosser said of the medal. He said of those he served with that “I didn't do anything they didn't do. I was just lucky enough to survive it.”