Army private’s Medal of Honor sold for more than $15,000 by German auction house

There was a campaign to stop the auction, but Germany is not subject to U.S. laws. 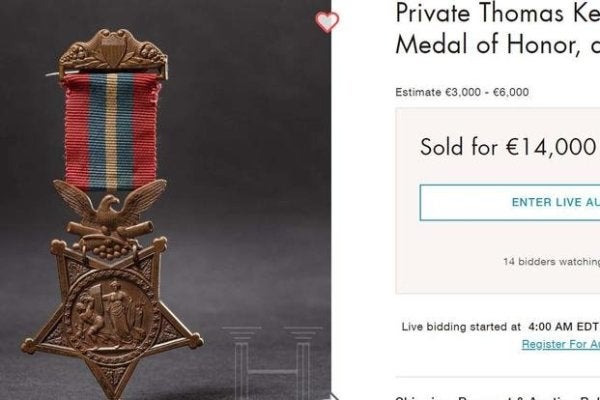 A Medal of Honor awarded to an Army infantryman for heroism during the Spanish-American War has been sold for $14,000 euros, or nearly $15,500, a Munich-based auction house confirmed Thursday.

The sale comes after advocates including Texas Republican Sen. Ted Cruz and the National Medal of Honor Museum staged a late campaign to stop the auctioning of the medal, saying it damaged the dignity of the nation's highest award for combat valor. It belonged to Pvt. Thomas Kelly, who earned it in 1898 while fighting in Santiago, Cuba.

But the German auction house Hermann-Historica, which is not bound by U.S. law, went through with the sale. The listing site shows just one bid; the medal ultimately went for four times the starting bid of 3,000 euros.

Bernhard Pacher, managing director of Hermann-Historica, told Stars and Stripes that he had previously sold four Medals of Honor, and added that the seller was a private individual “looking to beef up his pension.”

Reached for comment Thursday, a Hermann-Historica employee confirmed the medal's sale but asked that further queries be sent by email. An emailed query did not receive an immediate response.

While the sale and barter of the Medal of Honor is illegal in the U.S., the law is not binding on international sellers.

Dave Knaus, a spokesman for the National Medal of Honor Museum, told Military.com that the museum is looking into who bought the medal and contemplating future steps. He said the museum is currently compiling historical data on other medals that have gone missing or changed hands.

Efforts to locate a surviving relative of Kelly, who died in 1920, had not been successful, Knaus said.

According to Kelly's medal citation, he “gallantly assisted with the rescue of the wounded from in front of the lines and while under heavy fire from the enemy.”