Despite multiple public accounts of his bravery, Army Cpl. Waverly Woodson was thwarted from receiving the Medal of Honor honor twice, a bipartisan group of lawmakers says 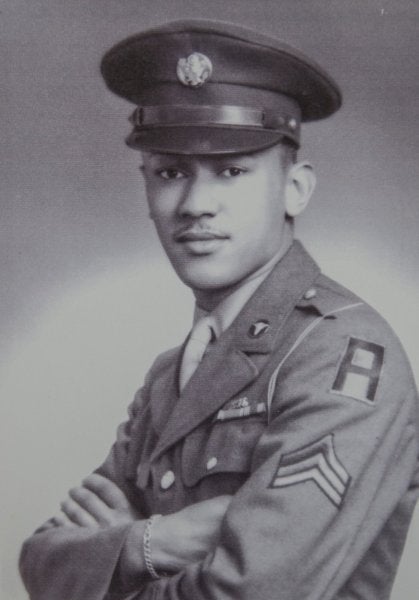 Army Cpl. Waverly Woodson returned from World War II a hero. A medic from 320th Barrage Balloon Battalion, the only Black Army unit that landed at Omaha Beach, Normandy, on D-Day, he'd labored 30 grueling hours, fighting through his own shrapnel wounds to save the lives of dozens, perhaps hundreds, of men.

But despite multiple public accounts of his bravery, Woodson was thwarted from receiving the military's highest combat honor twice, a bipartisan group of lawmakers says: once because of the color of his skin and again because of an Army administrative technicality. Now, that group is planning to take legislative action to ensure that Woodson gets his medal.

Four lawmakers in the House and Senate announced Tuesday that they are introducing legislation that would authorize President Donald Trump to award Woodson the Medal of Honor, bypassing the traditional military approval process. The group is led by Sen. Chris Van Hollen, D-Md., who first called on the Army to act on Woodson's case in 2015. It also includes Maryland representatives Anthony Brown and David Trone, both Democrats, and Sen. Pat Toomey, a Pennsylvania Republican.

While Woodson's widow, Joann, lives in Maryland, his original hometown was Philadelphia. Woodson died in 2005 at age 83, having received only the Bronze Star in recognition of his bravery.

“Back home, Black newspapers hailed Woodson as the 'No. 1 invasion hero,' and Stars and Stripes wrote that he and his fellow medics 'covered themselves with glory,'” Van Hollen said. “But Waverly Woodson returned home to an America that still did not guarantee basic civil rights and equal treatment under the law, much less equal recognition for his heroism.”

No Medals of Honor were presented to Black troops at the conclusion of World War II; it was only after then-President Bill Clinton acted more than half a century later that seven Black veterans received the medal. Van Hollen says the Army has declined to reconsider Woodson's case as it lacks an original recommendation from his command — a document he believes perished in a famous 1973 records fire.

Brown, the ranking member of the House Armed Services Committee, said that, despite the administrative roadblocks, the time is right for Woodson to be recognized fully.

“Corporal Woodson is deserving of the Medal of Honor. And there is a record that supports that. And you know, for reasons that the Army is trying to articulate, they can't get beyond that,” Brown said. “But … I don't think we can ignore the fact that what has changed is in this country. We do have a heightened sensitivity of the racial inequities and disparities that have plagued this country for four centuries. … And now is a day of reckoning for all of us to step forward and say, 'How do we correct this horrible record?'”

Woodson's wife, who participated in a press call with the four lawmakers, discussed how her husband had been recalled to service during the Korean War and, in yet another act of racism, been denied an instructor posting at a base in the still-segregated state of Georgia.

Joann Woodson, now 91, was aided in her advocacy of her husband by historian Linda Hervieux, who researched Woodson's record extensively for her book, “Forgotten: The Untold Story of D-Day's Black Heroes, at Home and at War.” It was their work that first caught Van Hollen's attention.

“We had a long marriage, and we want to have a legacy for our family,” Joann Woodson said. “And it is now the time to right the wrong, and it can be done. He deserves it. And I just keep pulling. I think that we have to keep history alive, and history has to be as correct as it possibly can. And this is one way to get it correct.”

Van Hollen said he and Toomey would work to pass the bill by unanimous consent in the Senate and added he is hopeful it will swiftly reach the president for final passage.

The new push closely follows news that Sgt. 1st Class Alwyn Cashe, who sacrificed his life in 2005 to pull fellow soldiers out of a burning vehicle, now has the support of Defense Secretary Mark Esper for the Medal of Honor. Cashe would be the first Black service member to receive the Medal of Honor for heroism in the post-9/11 wars.