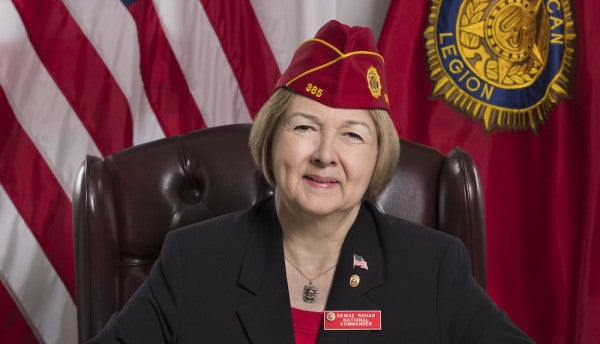 At 12:00 p.m. on Aug. 24, the American Legion, the nation’s largest veteran service organization, elected its newest national commander — and for the first time in its 99-year history, it elected a woman.

Denise Rohan joined the Legion 33 years ago after serving in the Army’s Quartermaster Corps at the tail end of the Vietnam War. Now, she will serve the organization’s 2 million members nationwide.

“I don’t think any national commander over the last 98 years would tell you it wasn’t an incredible honor,” she told Task & Purpose in an interview.

‘I am a Legionnaire who happens to be female’

Rohan is not just veteran: She’s also an Army wife, a member of both the Legion and its auxiliary, and a volunteer for the 115th Fighter Wing of the Wisconsin Air National Guard’s Airman and Family Readiness Program. Since she joined the Legion, she has traveled to every state except Hawaii.

With Rohan’s election, the American Legion became the second major veterans service organization this month to promote a woman to its highest post. Disabled American Veterans (DAV) selected Army veteran Delphine Metcalf-Foster to serve as national commander at its annual convention on Aug. 1.

“I’m hoping to bring some awareness to the fact that women have always been welcome in the American Legion,” Rohan said. “I am a Legionnaire who happens to be a female. I’ve worked from the post level all the way up. [I hope] that brings a new perspective on our organization.”

Political clout and friendship across eras

For decades, the Legion has been one of the largest and most formidable veterans’ organizations, offering members fraternity and a national platform for the issues that concern them. It was a Legion national commander, Harry Colmery, who famously drafted language for the original G.I. Bill during World War II. And the organization was instrumental in getting Congress to pass the “Forever GI Bill” just a few weeks ago.

Rohan said she can hardly believe how much the national attitude toward veterans has changed since she first enlisted in the late Vietnam era — and how important the VSOs have become as movers of policy and culture.

Legion members from younger generations and wars are also learning how drastically different their home-front reception was than some of the older Legionnaires’.

“Those currently serving are giving those Vietnam veterans the welcome they deserved that they never got,” she said. “It’s really heartwarming.”

Focus on the families

But the American Legion faces some tough challenges, too. One of Rohan’s top priorities — literally, since it’s emblazoned across the top of her campaign website — is putting “Family First,”: broadening the organization’s focus from just service members and vets to military families. It’s a campaign that’s born out of her own experiences, not just as a vet, but as a vet’s spouse.

“We always talk about our military personnel and our veterans, but families of our heroes are also serving along with them,” she said.

While living in Wisconsin and working with American Legion Squadron 333, she and her husband Mike (a career Army veteran and a fellow Legionnaire) made it their mission to focus on family welfare above all.

“To me, it’s a national security issue,” Rohan said. “If know their families are being taken care of at home, they can focus more on their mission. As my husband says: ‘So they have one less worry on the battlefield.’”

The Legion is also actively seeking younger leaders on every level. The group has seen a million-member decline in membership over the last 20 years, as younger veterans are opting for more service- or fitness-oriented organizations, like Team Red, White, and Blue or Team Rubicon. It’s not a problem unique to the Legion; the Veterans of Foreign Wars and other more-established VSOs have been trying to stop membership losses by recruiting younger vets.

Groups like the Legion and VFW do have one ace card, though: their political clout and successful history of vets’ advocacy on Capitol Hill.

“Our national staff has a fantastic staff in Washington, D.C. that does our lobbying for us,” Rohan added.

Rohan also reaffirmed her dedication to the four pillars that the American Legion was founded on: Veterans affairs and rehabilitation, national security, Americanism, and children and youth.

“We’re always wanting to make sure our veterans are taken care of,” Rohan added.

“Americanism” hasn’t always yielded favorable policy. In its early years, the Legion earned a reputation for being nativist — a charge that some critics leveled at the group as recently as 2008. On comment boards like Rally Point, some younger veterans have argued that the American Legion is narrowly conservative. And some of the Legion’s legacy campaigns, like fighting for a constitutional amendment to ban U.S. flag-burning, seem like holdovers from an earlier era.

Founded in 1919, the American Legion allowed women to vote for national commander before they could even legally vote for president of the United States. Still, it took a century for the group to anoint a female leader.

But according to Rohan, the Legion isn’t looking back. It’s “a war-era veterans organization, and it has always been inclusive regardless of race, gender, religion, or anything,” she said. “If you served in a wartime era, you’re eligible.”

When it comes to hot-button issues about the active-duty force, like integration of women in combat, the repeal of “Don’t Ask, Don’t Tell,” and the inclusion of transgender troops, Rohan says the Legion has a role to play in counseling policymakers. But she said it was ultimately up to Defense Department officials to decide who is eligible to serve, based on the information they have about performance.

“They’re the ones who have the knowledge,” Rohan said. “We just want to make sure we have a strong national defense.”