Meet The Best Mortar Team In The US Army

The Army’s inaugural Best Mortar Competition pit seven four-man teams against each other to find the best of the best... 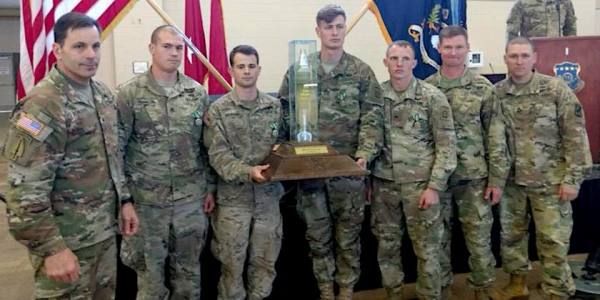 The Army’s inaugural Best Mortar Competition pit seven four-man teams against each other to find the best of the best this month.

But members of the 82nd Airborne Division team — which led from start to finish of the three-day competition — never felt like their team was limited to four soldiers.

Instead, Staff Sgt. James Pennington, Sgt. Ryan Mosser, Cpl. Jacob Nolan and Cpl. Alec Norton said they had more than 17,000 All American paratroopers behind them.

In winning the competition at Fort Benning, Georgia, the 82nd Airborne team also fulfilled lofty goals they placed on themselves after a strong showing during a pilot competition last year.

All American teams placed first and third in that event, the soldiers said. This year’s team was a combination of those teams.

“We wanted to go back and take it by storm,” Pennington said. “Our goal wasn’t just to win. It was to dominate.”

Mosser said the competition wasn’t easy. It tested the soldiers physically and technically and provided them little time to rest.

“They attempted to demoralize us,” he said. “But it never happened.”

Sometimes operating on little sleep, the soldiers said they leaned on each other to push through.

And they found motivation in the support they received from their leaders at Fort Bragg, including senior leaders who traveled to Fort Benning to cheer them on.

“It was a notable morale boost,” Pennington said.

“We train to win. We expect to win. Not only for ourselves, but others expect the same,” Nolan said.

He said the team worked well together, adapting to individual strengths and weaknesses. That was despite not being able to train as a team for very long ahead of the competition.

Officials said the 82nd Airborne Division team had a 12-week training program to prepare for the event. But because the 3rd Brigade Combat Team is on the Global Response Force mission, they had to condense the training to two weeks.

The Global Response Force is tasked with deploying anywhere in the world on short notice. Pennington said that readiness posture helped the soldiers overcome the shortened timeline and set them up for success.

At Fort Benning, that focus showed, the soldiers said.

“We’re the 82nd. We’re better than everyone else,” Pennington said.

The soldiers said they now aim to start a tradition of dominance in the Best Mortar Competition. Pennington promised the 82nd Airborne Division would work twice as hard next year in an attempt to keep the Best Mortar title.

“If they want it,” he said of other units, “they’re going to have to bring it.”