Megan Pohlmeier's Army recruiter gave her something special to wear with her cap and gown when she graduated from Hastings... 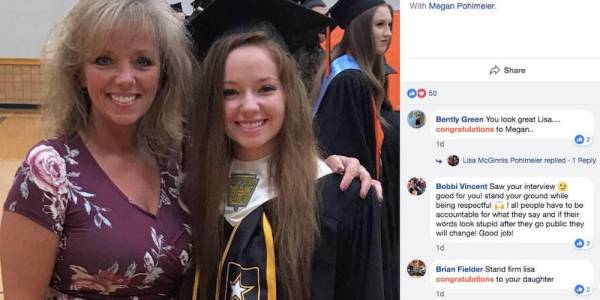 Megan Pohlmeier's Army recruiter gave her something special to wear with her cap and gown when she graduated from Hastings Senior High School in Nebraska over the weekend.

It was a black sash with gold lettering that said, “U.S, Army” on one side and had the Army logo on the other.

“Kind of as something to show off and be proud of,” Pohlmeier, 18, told KHGI-TV in Kearney, Nebraska.

But the school's principal didn't let her wear it during the graduation ceremony because it didn't conform with the rules about what can and can't be worn with caps and gowns.

That upset Pohlmeier, her family, and scores of others who read about the incident in a Facebook post that has been shared more than 4,000 times since Sunday.

“I'm in the Army, this is what I'm doing and I'm really proud of what I'm doing, and I feel like (the principal) just took that opportunity away from me,” Pohlmeier told KHGI.

“She may have been threatened to not receive her diploma if she wore this during graduation, but you can damn sure bet she wore it with pride as soon as she left the gym,” Megan's mom, Lisa McGinnis Pohlmeier, posted on her Facebook page Sunday.

“You are army strong Megan.”

She lauded her daughter for working “her butt off to not only graduate early but to prepare for her future in the Army.”

People critical of the school's decision have posted comments ranging from “what a horrible way to treat a strong hero” to “very disrespectful, unprofessional, and unacceptable. Shame on you Hastings Senior High School! #militaryfamily #armystrong.”

Others supported the school's decision to not make an exception for Pohlmeier, including one woman who identified herself as a member of a military family on the school district's Facebook page. “This time is about high school, not future endeavors. The celebration should start and stop with that period of time,” she wrote.

“There is plenty of time to celebrate college, trade school and military endeavors as a private family or at those respective graduations. Not all kids have their next steps figured out or have the financial means or support to follow their career dream. A high school diploma is a huge achievement. Honoring it, and it alone should be enough for one day.”

The criticism became so strong that the school went to Facebook to explain what had happened, calling the original Facebook post that stirred up people “untrue” and trying to clear up confusion about why people thought they saw other students wearing things that broke the rule.

“People aren't stopping to check what actually happened,” Hastings Public Schools Superintendent Craig Kautz told KHGI. “They're believing whatever is posted and I'm not sure why.

“Did we deny a student the ability to wear a sash provided by the Army? Yes, that's true but that wasn't an attempt to be unpatriotic or disrespectful to our armed forces.”

Megan told the TV station she had planned to wear the sash under her gown and pull it out after she got her diploma.

No student “was allowed to display any symbol of any organization other than those symbols earned while attending Hastings Senior High,” the district wrote on Facebook.

Some of the “extras” that students were allowed to wear at the graduation ceremony included their National Honor Society hoods and Freshmen Mentoring cords, the district pointed out.

“Apparently, these symbols were mistaken as symbols of future institutions of higher education by the person who made the original post,” the district wrote. “That conclusion is entirely inaccurate.

The charge that the school is “not patriotic” could not be further from the truth, school officials wrote.