The Big Reason Mexican Cartel Violence Is On The Rise, According To The Pentagon’s Top Intelligence Officer

2017 ended as Mexico's most violent year in recent memory, with 25,339 homicide cases — more than during the peak year... 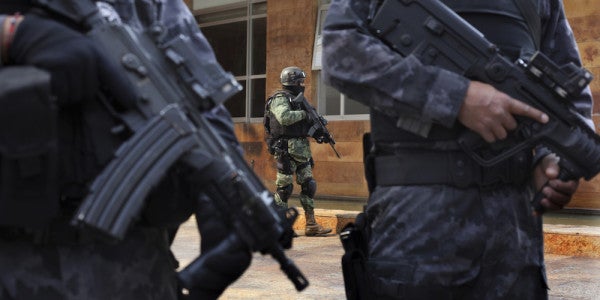 2017 ended as Mexico's most violent year in recent memory, with 25,339 homicide cases — more than during the peak year of inter-cartel fighting in 2011.

Crime and violence have steadily increased in Mexico over the past three years, and the bloodshed over the past decade has come despite, and often because of, the Mexican military's and federal police's presence in the streets.

Speaking before the Senate Intelligence Committee on Feb. 23, Army Gen. Robert Ashley, the head of the Defense Intelligence Agency, described a key trend that has contributed to the violence.

Asked what threats U.S. officials saw in Mexico and how the situation there had changed over the past decade, Ashley told the committee what has “transpired over the last couple of years is you had five principal cartels; we alluded to the number of captures that had taken place, over 100. Those five cartels have kind of devolved into 20, and part of that outgrowth, you've seen an increase in the level of violence.”

The dynamic Ashley described — the removal of criminal leaders leading to fragmentation of their groups and further violence — has been recognized as a failing of the “kingpin strategy” pursued, with strong U.S. backing, by Mexican President Enrique Peña Nieto and his predecessor, Felipe Calderon, who deployed troops to confront domestic insecurity in 2007.

The kingpin strategy targets high-profile criminal leaders, with the idea that their capture or death will weaken their organization.

Ashley noted that under Peña Nieto, Mexico has brought down more than 100 high-profile cartel figures — among them Sinaloa cartel chief Joaquin “El Chapo” Guzman (twice), Knights Templar founder Servando “La Tuta” Gomez (captured because his girlfriend brought him a cake), and Hector Beltran Leyva and Alfredo Beltran Guzman, both of whom lead of the Beltran Leyva Organization, an erstwhile Sinaloa cartel ally.

“What actually happens is that if you take out the head of organization and it creates power vacuums and leads to … both internal schisms and encroachment … and creation of new spaces for other actors that can come, until we see a multiplication effect, or a proliferation, of smaller, regional groups,” David Shirk, a professor at the University of San Diego and director of the school's Justice in Mexico program, told Business Insider in late 2016.

After a decade of Mexico's drug war, several large cartels are thought to still be operating in Mexico, though two — the Sinaloa cartel and the Jalisco New Generation cartel— are believed to be the most powerful. But smaller groups, often splinters of larger cartels, have proliferated. (Sinaloa cartel infighting caused violence to spike in northwest Mexico in 2016 and early 2017.)

Information obtained from the Mexican attorney general in 2017 by journalist Nancy Flores indicated there were nine large cartels with 36 smaller related groups present in Mexico — fewer than the 88 total groups the attorney general's office identified in 2014, and even fewer than the 200 drug-trafficking cells identified by Mexican political scientist and crime analyst Eduardo Guerrero-Gutierrez. Such groups are fluid and hard to define, making an exact number hard to determine.

Smaller groups are also less capable of transnational drug trafficking and rely on local-level crimes, like kidnapping and extortion, which drives up crime levels and increases insecurity.

This dynamic can be seen throughout Mexico, especially in places like Tamaulipas, where factions of the Gulf cartel are competing for control of drug trafficking and other criminal rackets, and in Guerrero, a hotbed for heroin production that is home to a plethora of local and regional criminal groups and larger groups like the Sinaloa cartel that are involved in the cultivation and transportation of drugs as well as local criminal enterprises.

“What's happening, it's like ants,” a Tamaulipas state police officer told Vice of the kingpin strategy's effects in late 2016. Taking out the “queen ant” without following up, he said, means they can regroup and return — or others take the queen's place.

Security agents stand guard outside the apartment building where Damaso Lopez, nicknamed “El Licenciado,” was captured in the Anzures neighborhood of Mexico City, Tuesday, May 2, 2017. Mexican prosecutors said they captured Lopez, one of the Sinaloa cartel leaders who launched a struggle for control of the gang following the re-arrest of Joaquin “El Chapo” Guzman. Lopez was long considered Guzman's right-hand man and helped him escape from a Mexican prison in 2001.Associated Press photo

'To recover peace and calm'

But the fragmentation and proliferation of criminal groups aren't the only trends contributing to insecurity in Mexico.

A lack of economic opportunity for marginalized communities creates amenable operating conditions for criminal groups, which also thrive on high profit margins created by drug prohibition. Corruption, particularly of local government officials and police forces, is rampant, inhibiting efforts to crack down on criminal groups and undermining the rule of law.

Deep-seated impunity allows many crimes to go unpunished. According to the 2016 Global Impunity Index, only seven of every 100 crimes in Mexico are reported, and just 4.46% of reported crimes actually result in convictions. All told, “less than 1% of crimes in Mexico are punished,” the Center for Impunity and Justice Studies, which calculated the index, estimated.

Despite its failings, the Mexican government has not scrapped the militarized approach to fighting crime. A controversial law formalizing the military's role in domestic law enforcement was signed late last year, though it is being evaluated by the supreme court.

And at the end of January, days after final crime data showed just how violent 2017 had been, Mexico's national security commissioner said more soldiers would be deployed to crime hotspots — “to recover peace and calm for all Mexicans.”