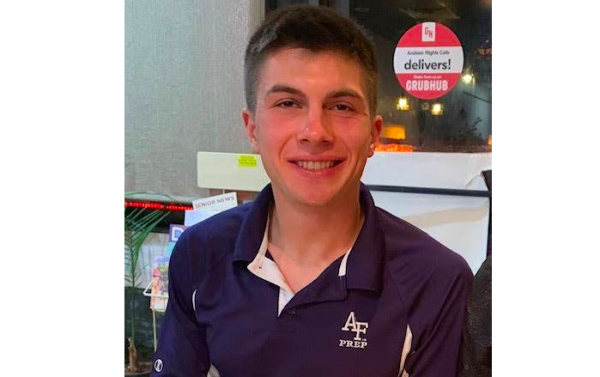 Tice, 20, who was attempting to climb 14,259-foot-high Longs Peak, was reported missing by the academy on Nov. 26. His vehicle was found at the trailhead leading to the peak, the National Park Service said.

On Thursday, searchers affiliated with the Tice family told park staff that they found items believed to belong to Tice below treeline in the Boulder Brook drainage, park spokesperson Kyle Patterson said in a release.

According to the park statement, the Boulder Brook drainage was one of the areas where initial search efforts were heavily focused but remained covered by deep snow through the winter and spring.

Once the remains are recovered, they will be turned over to the Larimer County Coroner's Office, which will perform the autopsy.

Tice was last seen by two other park visitors between 7:30 and 8 a.m. on Nov. 24 just above tree line blizzard conditions. They said the weather was terrible at the trailhead and that visibility and conditions continued to worsen.

Tice, they said, was wearing only a sweatshirt and sweatpants, a hat, lightweight gloves and tennis shoes. They told park officials that they tried unsuccessfully to dissuade him from climbing Longs Park.

Tice apparently did not let anyone know abut his plans, park officials said.

Tice's parents, who live in Nevada, said he told them in November that he was going to do schoolwork that Friday night and planned on hiking the next day. His phone's signal last was received Saturday near East Woodmen Road and Interstate 25.

After the search was called off, Tice's parents held a news conference during which they accused the park service of abandoning their son despite there being the possibility of his having found shelter and still being alive.

“Limited searches were conducted and directed by the National Park Service and their search and rescue from Nov. 27 to Dec. 3 — a total of six days of boots on the ground,” Tice's father said.

“Hikers who have gone to (an area the National Park Service had not searched) report that there are numerous shelters (where) a hiker could be protected from severe weather elements,” Benjamin Tice said.

The family's accusations prompted the agency to defend its search efforts. In Friday's release, the park service detailed the following:

— At sunrise, Tuesday, Nov. 27, three days after he was last seen, active search efforts began in the Longs Peak area of Rocky Mountain National Park for Tice. A Colorado Air National Guard Blackhawk helicopter attempted to assist with aviation operations on Tuesday but were curtailed due to 90+ mph winds.

— Additional military coordination included cellphone forensic analysis. The cellphone data was requested early in the investigation, and received on Thursday, Nov. 29. Cellphone data provided broad areas of potential transactions but was vague information given the limitations of the signal in that area. These transactions were not “pings” nor texts nor phone calls. This information indicated Tice's cellphone was picking up a signal early Sunday morning, Nov. 25. The large, broad area referenced in the analysis was part of where search efforts were conducted.

— Beginning Friday morning, Dec. 7, through Sunday, Dec. 9 search activities for Micah Tice were focused from the Granite Pass area to the northern lower slopes of Longs Peak, including the Wind River and Boulder Brook drainages. On Monday, Dec. 10, due to conducive weather conditions at high elevations on Longs Peak, teams focused their efforts on the Keyhole Route to the summit of Longs Peak as well as the Chasm Lake area, Clark's Arrow and the Loft. On Tuesday, Dec. 11, searchers again focused efforts in the Wind River drainage.

SEE NEXT: Young military hopefuls are willing to go to war for their country. Instead, many are losing their lives in school shootings