CIA Expert: The US Is In The Middle Of Another ‘Cold War’ — Just Not Against Russia 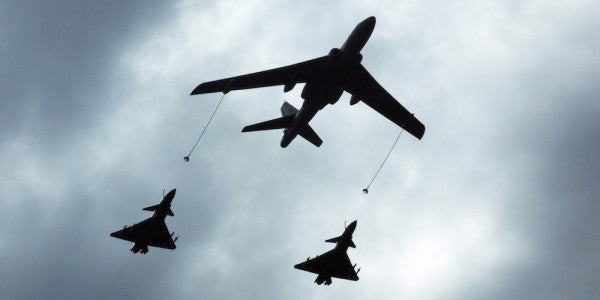 Even as the Trump administration works to warm relations with North Korea and Russia, America’s relations with China have chilled so much a top Central Intelligence Agency expert has dusted off an old term: “Cold War.”

“What they are leading against us is fundamentally a Cold War,” he said.

Much of the security forum, which kicked off Thursday night and runs through Saturday, has focused on President Donald Trump’s overtures to Russia and North Korea and questions over whether Russian president Vladimir Putin is still seeking to interfere with American politics after federal indictments charged his regime with meddling in the 2016 presidential campaign.

But China’s rise remains the top topic that keeps intelligence analysts and diplomats awake at night. With a globe-spanning trade empire, the planet’s largest military force and a new blue-water Navy complete with a pair of aircraft carriers, China over the past two decades has gone from a third wheel in the Cold War to a superpower and main competitor to U.S. prestige and influence, say panelists at the annual forum sponsored by the Aspen Institute.

“At the end of the day, the Chinese fundamentally seek to replace the United States as the leading power of the world,” Collins said.

Acting Assistant Secretary of State for East Asian and Pacific Affairs, Susan Thornton, is also watching China with a wary eye, noting they have also shown off the ability to meddle in regional politics in a manner similar to Russian campaigns in Europe.

“China is not just a footnote to what we’re dealing with in Russia,” she said.

Key economic outreach campaigns are making the Chinese dragon as daunting as the Russian bear once was. China’s “belt and road” initiative seeks to connect it with markets in Asia, Europe, and Africa through rail and road infrastructure along with boosts to its maritime presence. China is also growing its Asian Infrastructure Investment Bank, footing the bill for international development projects and becoming a Bejing-based rival to the World Bank.

Singapore’s ambassador to the United States, Ashok Kumar Mirpuri, said China, with its central location on the planet’s largest landmass, also has a real-estate advantage in its push for global dominance.

“We have to live with China,” Mirpuri said, noting that America is “an ocean away.”

U.S. tensions with China have grown in recent months as President Trump has pushed tariffs topping $200 billion on Chinese goods. Friday, Trump accused China of manipulating the value of its currency to gain an unfair advantage in global trade.

“China, the European Union, and others have been manipulating their currencies and interest rates lower, while the U.S. is raising rates while the dollars gets stronger and stronger with each passing day — taking away our big competitive edge,” Trump said on Twitter.

Collins, the CIA expert, worries whether the U.S. has enough leverage to make Trump’s trade threats stick. While America is an important trading partner for China, it has solid trade relationships across the globe.

“Trade with the United States is not that significant in terms of their economic well-being,” he said.

With nearly 1.4 billion residents and a growing middle class, Chinese businesses have easy access to an internal market that’s the world’s largest. He cautioned that China’s Xi likely is unwilling to cut Trump a deal that would impact that nation’s growing international status.

“I think they are probably scratching their heads figuring out what the next move may be,” he said.

And while China has partnered with the United States to deter a growing conflict with nuclear-armed North Korea, Chinese leaders are also worried about internal concerns in that case. Thornton said Xi wants to avoid a war on the Korean Peninsula, but also wants to see U.S. influence over key allies in Asia like South Korea and Japan decline.

In both those nations, America has military bases and long-standing defense agreements that are geared toward deterring Chinese aggression. China now is working to match the Pentagon’s military power, with Air Force and Navy building programs that have turned toward the technological quality of weaponry rather than the old Chinese standard that relied on massive quantities of cheap, low-tech weapons.

Marcel Lettre, who served as the Pentagon’s intelligence chief under the Obama administration, said upgrading Chinese military forces is a massive piece of work.

“It’s a useful reminder to understand the modernization is taking place on a large baseline of a military,” he said.

The Pentagon’s latest defense strategy calls out growing Chinese capabilities and is a driving factor behind President Trump’s push for a separate “space force” to protect America satellites. Lettre said the changes are a necessary reaction to China’s rising military might.

But, experts said, China might not be the monolithic rival it appears to be.

Collins noted that Xi faces critics at home who are quietly questioning his growing political status that gives him leadership power reminiscent of Mao Zedong.

“There are pockets of criticism and concern on him for what he’s done in leadership and questions about the direction he’s set,” Collins said.

Thornton described the Xi regime as one that is powerful, but brittle, making it vulnerable to internal changes among the Chinese population.

“I think the Chinese government and Communist Party has a legitimacy problem,” she said.

Thornton said the United States needs to build closer bonds with its traditional allies and boost its global outreach to keep pace with China’s rise. But America, with its international economic reach backed by an open society with democratic institutions and a long list of global friends, has an advantage, she said. The United States still has a greater ability to influence other countries through the appeal and attraction of its freedoms and opportunities.

“Our soft power is incredibly more powerful than Chinese soft power,” she said.