Michael Flynn, President Donald Trump's first national security adviser, is seeking to have his guilty plea thrown out for lying to the FBI during the Russia investigation — a risky legal strategy that could irritate the federal judge who will sentence him next month 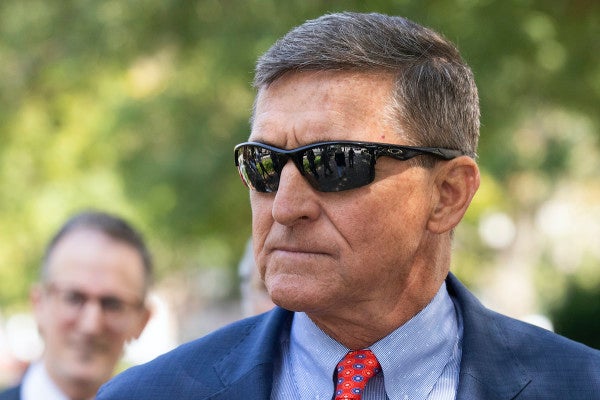 WASHINGTON — Michael Flynn, President Donald Trump's first national security adviser, is seeking to have his guilty plea thrown out for lying to the FBI during the Russia investigation — a risky legal strategy that could irritate the federal judge who will sentence him next month.

In seeking to dismiss the case, Flynn's lawyers have asked U.S. District Judge Emmet G. Sullivan to hold prosecutors in contempt of court for withholding evidence. They also have embraced what appear to be unrelated conspiracy theories pushed by Trump and his allies to discredit federal investigators.

Legal experts said it is clear from court filings that the real audience for Flynn's moves is not Sullivan, a no-nonsense judge who has little patience for defendants seeking to duck responsibility for their crimes. It is the president who named Flynn national security adviser after the 2016 election — and then sacked him after less than a month on the job.

“Flynn is playing to Trump,” said James Cohen, a law professor at Fordham University in New York. “You don't evaluate these arguments based on them making sense. You evaluate them on the basis of whom they are making happy. That would be Trump. Flynn wants a pardon.”

Flynn was the only member of the Trump White House charged in the probe, though his case did not involve allegations that he colluded with Russia to help Trump get elected.

Mueller ultimately concluded that the Trump campaign welcomed Russian help in the 2016 campaign but did not engage in a criminal conspiracy with the Kremlin.

Flynn pleaded guilty to lying about his conversations with Sergey Kislyak, Russia's ambassador to the U.S., in the weeks before Trump's inauguration in January 2017. He falsely denied to FBI agents that he told Kislyak that Russia should not retaliate after the outgoing Obama administration enacted sanctions to punish Moscow for meddling in the election.

When Russian President Vladimir Putin announced that Moscow would not hit back with sanctions, Kislyak called Flynn to tell him that was in response to his request, according to court documents.

On Feb. 13, 2017, Flynn resigned after the White House learned he had lied to Vice President Mike Pence about those conversations. He became the first in a string of high-profile departures from the Trump administration as the Mueller probe and other scandals have swirled around the White House.

It was a staggering downfall for a former Army lieutenant general who helped lead efforts to strengthen military intelligence operations in Iraq and Afghanistan, and later led the Pentagon's Defense Intelligence Agency.

Citing that assistance, prosecutors urged Sullivan last year to spare Flynn prison time. Under federal sentencing guidelines, which judges use to help mete out appropriate punishment, he faces no more than six months in jail.

He fired his lawyers who had negotiated the guilty plea and replaced them with a team led by Sidney Powell, a pro-Trump attorney who frequently appears on conservative television and radio shows.

In seeking to toss the case and obtain more evidence, Powell and her colleagues in recent months have accused the FBI of plotting to trap Flynn. Agents orchestrated an “ambush-interview,” Powell wrote, and tricked her client “into making statements they could allege as false.”

Flynn's new lawyers have also savaged the credibility of a former FBI agent, Peter Strzok, who had helped question Flynn. Strzok was fired in August 2018 after Justice Department officials uncovered private anti-Trump texts he had exchanged with an FBI employee with whom he was having an affair.

Arguing that prosecutors withheld helpful evidence, the defense lawyers have sought to link Flynn's plight to a number of conspiracies involving the Russia investigation, though none appear to directly involve Flynn's lies to the FBI or Pence.

Most recently, Flynn's new team has sought access to cellphones purportedly belonging to Joseph Mifsud, a Maltese academic who told a Trump campaign adviser that Russia had “dirt” on Democratic presidential candidate Hillary Clinton in the form of “thousands of emails.” That tip ultimately led to the FBI investigation of Russian meddling in the 2016 race.

In his report, Mueller wrote that Mifsud had “connections to Russia” and former FBI officials have described him as a Russian agent.

In court papers, prosecutors denied withholding evidence and scoffed at the conspiracy theories promoted by Powell and her team.

“Since the beginning of their involvement, the defendant's new counsel have sought to get the charges dropped, professed their client's actual innocence, and perpetuated conspiracy theories, all while stating that the defendant does not intend to withdraw his guilty plea,” federal prosecutors wrote.

Flynn's efforts to get more evidence, prosecutors argued, is “a fishing expedition in hopes of advancing conspiracy theories related to the U.S. government's investigation into Russian interference in the 2016 presidential election.”

A Justice Department spokeswoman and Powell declined to comment. Sullivan has not indicated when he might rule on the defense team's motions.

If the judge sides with prosecutors, Flynn could be in trouble, legal experts said.

“If the judge disagrees with Flynn's arguments and concludes that Flynn is not fully accepting responsibility for his misconduct, then I would expect Judge Sullivan to say as much at sentencing and give a sentence that takes that lack of acceptance into account,” said Steven Levin, a former federal prosecutor.

Levin and other legal experts say that by not withdrawing his guilty plea, Flynn has kept prosecutors from charging him with more serious crimes.

As part of his plea, for example, Flynn admitted he made false statements about consulting work he did for Turkey. If he were charged with more serious offenses and lost at trial, he could face extended prison time.

Prosecutors also do not appear eager for the plea to evaporate, the experts said. A trial would take time and they have problematic witnesses, including the FBI agents who had an affair and sent anti-Trump text messages.

The judge has already indicated that he takes a dim view of Flynn's crimes.

During a tumultuous sentencing hearing last Dec. 18, Sullivan chastised Flynn in harsh terms, saying he had lied to FBI agents “on the premises of the White House, in the White House in the West Wing by a high-ranking security officer who, up to that point, had an unblemished career of service to his country.”

“I am not hiding my disgust, my disdain for your criminal offense,” Sullivan said, though he later backtracked on some of his harsher comments.

Sullivan subsequently expressed concern that the former Trump adviser was not accepting responsibility after his then-attorneys suggested in court filings that he had been set up by the FBI. “This sounds like backpedaling,” the judge said.