‘Arguably, You Sold Your Country Out’: Judge Blasts Michael Flynn For Lying To FBI 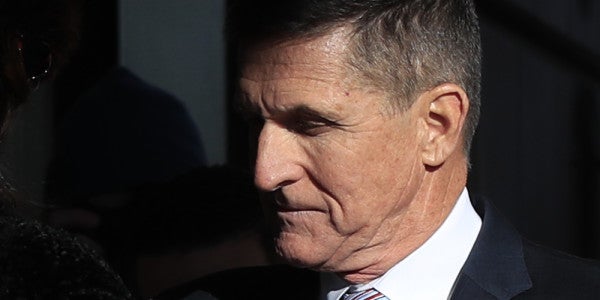 WASHINGTON — Michael Flynn, who briefly served as President Donald Trump’s first national security adviser, was excoriated by a federal judge Tuesday for lying to the FBI about his communications with Russia’s ambassador after the 2016 election.

Saying he was not “hiding my disgust, my disdain” for Flynn’s crime, U.S. District Judge Emmet G. Sullivan ripped into the retired three-star Army general in a blistering rebuke from the bench.

Noting that Flynn was an unregistered agent of a foreign country — Turkey — while in the White House, the judge angrily pointed to the furled U.S. flag in his courtroom.

“Arguably, that undermines everything this flag over here stands for. Arguably, you sold your country out!” Sullivan said. “All along you were an unregistered agent of a foreign country, while serving as the national security adviser to the president of the United States!”

The public humiliation caps the stunning fall, at least for now, of the decorated war veteran who rode the Trump campaign into one of the most powerful positions in government — and then was forced out after only 23 days.

Flynn, who pleaded guilty a year ago, told Sullivan that he had intentionally lied to the FBI and that he knew it was a crime, contradicting complaints by Trump’s supporters that he was unfairly charged.

Pressed by the judge, Flynn’s lawyer, Robert Kelner, said, “No, your honor,” when asked if the FBI had engaged in any misconduct or had violated Flynn’s rights when they interviewed him. Kelner added that Flynn stood by his guilty plea.

“This is a very serious offense — a high-ranking senior official of the government, making false statements to the Federal Bureau of Investigation while on the physical premises of the White House,” Sullivan said.

Flynn, however, is the only one who worked in the White House or had access to some of the government’s most closely held secrets as national security adviser.

But Mueller had recommended that Flynn be spared imprisonment because of a lauded 33-year military career and his “substantial assistance” to prosecutors in three separate investigations, including the probe into possible coordination between Trump’s campaign and the Kremlin-backed effort to interfere in the 2016 election.

President Donald Trump's former National Security Advisor Michael Flynn who pleaded guilty to lying to the FBI about his contacts with Russia during the presidential transition, arrives for his sentencing at the U.S. District Court in Washington, Tuesday, Dec. 18, 2018Associated Press/Manuel Balce Ceneta

Over the past year, Flynn submitted to 19 interviews with federal prosecutors for the three investigations, according to a Dec. 8 sentencing memo filed by Mueller’s office.

One of the investigations led Monday to the unsealing of a federal indictment charging Flynn’s former business associates, Bijan Rafiekian, and a Turkish citizen, Kamil Ekim Alptekin, with conspiracy and lying to the FBI.

They allegedly acted as illegal agents of the government of Turkey in a scheme to drum up U.S. support to extradite Fethullah Gulen, a Turkish cleric living in exile in Pennsylvania. Turkish authorities have accused Gulen of orchestrating a 2016 coup attempt, allegations he has strongly denied.

Flynn, who is identified as “Person A” in the indictment, appeared to play a major role in some of the events described. Prosecutor Brandon Van Grack told Flynn’s sentencing hearing Tuesday that Flynn had assisted investigators — and could have been charged — in the case.

In a Dec. 11 memo, Flynn’s defense lawyers urged the judge to sentence Flynn to a maximum of one year probation with “minimal conditions of supervision” along with 200 hours of community service.

The defense team said Flynn continued to “accept responsibility for his actions.” But the lawyers questioned why FBI agents did not warn Flynn before interviewing him at the White House on Jan. 24, 2017, four days after Trump took office, that lying to federal agents is a crime.

“Arguably, that undermines everything this flag over here stands for. Arguably, you sold your country out!”

Although the law does not require FBI agents to issue that warning, Trump and his supporters quickly alleged that Flynn had been entrapped, adding another wrinkle to partisan complaints about Mueller’s investigation.

In response, Mueller’s team told the court last week that Flynn also lied to Vice President-elect Mike Pence and others regarding his conversations with Russian ambassador Sergey Kislyak about the sanctions that President Barack Obama had imposed on Moscow in December 2016 in response to Russian interference in the U.S. presidential race.

Prosecutors said Flynn also “made a second series of false statements” when he belatedly registered last year with the Justice Department as working on behalf of the government of Turkey in 2016.

In their sentencing memo, prosecutors said Flynn’s three decades of military and public service “distinguish him” from the 32 other individuals charged so far as part of the special counsel investigation.

“However, senior government leaders should be held to the highest standards,” they added. “The defendant’s extensive government service should have made him particularly aware of the harm caused by providing false information to the government.”

Flynn grew up in Rhode Island, one of nine siblings whose father was a noncommissioned Army officer and whose mother graduated from law school when she was 63.

In seeking leniency, Flynn’s lawyers cited his devotion to family and his humble origins — he rose to Army lieutenant general without attending West Point. They also cited his military honors and his role in overhauling military intelligence operations in Iraq and Afghanistan.

Among the testimonials submitted to the court was a letter from John Keane, a retired four-star general, who said Flynn “single-handedly changed how we created, processed, and used intelligence during combat in the 9/11 wars.”

In April 2012, Obama named Flynn to head the Defense Intelligence Agency, the Pentagon’s chief spying arm. But Flynn was forced out two years later after repeated policy clashes with the White House and complaints about his erratic management.

After retiring from the Army, he formed Flynn Intel Group, which provided intelligence services for businesses and governments in ventures that sought to leverage his national security experience and contacts.

As payment for his work for Turkey in the Gulen case in the fall of 2016, Flynn and his company received $530,000, according to the prosecutors’ sentencing memo.

As a keynote speaker at the Republican National Convention in Cleveland in July 2016, Flynn called for the jailing of Democratic nominee Hillary Clinton, leading the crowd in angry chants of “Lock her up!” He urged Clinton to withdraw from the race, saying “if I did a tenth of what she did, I’d be in jail today.”