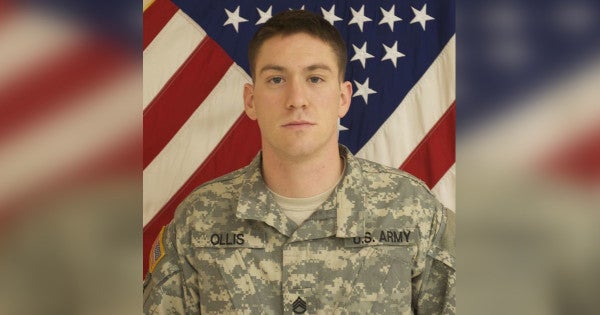 STATEN ISLAND, N.Y. — The Distinguished Service Cross was awarded posthumously to Army Staff Sergeant Michael H. Ollis in a ceremony marked by pomp and circumstance, poignant speeches, applause and even a few tears in Oakwood, New York on Saturday afternoon.

Military brass, politicians, veterans, family members and friends turned out in force for the standing-room-only dedication that was held on the lawn of the VFW Post that bears the Ollis name.

Vice Chief of Staff of the Army General James C. McConville bestowed the honor that symbolizes the extraordinary heroism of the infantryman to his parents, Robert and Linda Ollis, in a spiritually charged ceremony under brilliant sunshine.

Ollis, 24, a lifelong resident of New Dorp, sacrificed his own life on Aug. 28, 2013, while shielding Lieutenant Karol Cierpica of Poland, a member of the coalition forces, from a suicide bomber in Afghanistan.

McConville described Ollis as a “true American hero” and also asked Cierpica to stand for acknowledgement in the crowd.

“Their actions that day in August against a very determined enemy saved many, many lives,” the general said.

“They soundly defeated a threat that would have had strategic-level consequences for the United States, our allies and partners who were fighting against terrorism in Afghanistan.”

Lauding the WWII veterans at the event, McConville noted the many recent worldwide ceremonies honoring the 75th anniversary of D-Day.

“Every generation has its heroes and Michael Ollis is one of ours,” the general said.

“From my entire heart, I thank you,” Robert Ollis said to the general.

“I really would love Michael to be standing here,” Robert said, and moments later, his son's plaque fell off of a podium.

“That's Michael talking to us,” the father remarked.

The father spoke of his son's dedication to the military.

“Michael had a love affair with the United States Army,” his father said. “I think that's what made Michael so good.”

After a 30-day leave, Michael would be eager to return to service.

“He couldn't wait to get to the next deployment,” the father said, adding, “He had all intentions of staying in (the Army) forever.”

Of his son's demise, the father said, “It's painful to relive it. I've been approached many times by people who say, 'How the hell do you do it?'

But the father added that “through the tears, we have to tell the story of Karol and Michael. Because what Karol and Michael did in about 15 minutes, the United Nations hasn't been able to do in years.

“They just locked arms and followed each other. They didn't worry about what language it was…”

The father described Michael and Karol as “battle buddies” who helped their fellow soldiers “drive out the insurgents.”

Lilliana Runnels, 10, of PS 23, Richmond, read a Memorial Day essay that Robert Ollis introduced, saying that her words “brought Linda and I to tears.” The commentary told how on every Memorial Day, Lilliana and her family leave an American flag at a vigil site at Burbank and South Railroad avenues near the Ollis home. Lilliana — whose mother, Lisa, was a childhood friend of Michael Ollis — is this year's winner of a Memorial Day Essay Contest sponsored by Sen. Andrew Lanza.