Whatever Happened To The Navy Midshipman Who Gave President Bush A Bear Hug? Discipline. Then Redemption

VIRGINIA BEACH — Bobby Rashad Jones couldn't help himself. He was the midshipman with the lowest grade-point average in the... 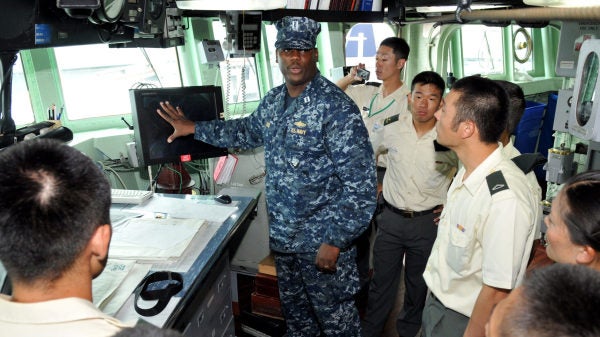 He was the midshipman with the lowest grade-point average in the Naval Academy Class of 2001 – known as the anchor – and was overwhelmed with joy to receive his commission after spending years on academic probation.

President George W. Bush was the commencement speaker in Annapolis and cordially shook hands with each graduate. But as Jones walked across the stage at Navy-Marine Corps Memorial Stadium, the crowd roared in support for the “anchor.”

Jones was a football player who was well known on campus, partly because tradition calls for each graduating midshipman to pay the class anchor $1.

He could've chosen a more glamorous life and played football at a powerhouse program like Florida. Or he could've done without the stress of military life by going to an Ivy League school. And he could've left the academy when it all seemed so overwhelming after his first semester to join friends at the University of North Carolina.

But he stayed because he wanted to be part of something bigger than himself – and he had made it.

As he walked toward Bush, the excitement was too much contain.

He jumped up and down. His head shook. He pumped his right fist in the air.

A presidential handshake simply wouldn't do.

The former linebacker grabbed Bush's hand, pulled him in and hugged the commander-in-chief. And not just any hug; a bear hug that briefly lifted Bush off the ground as part of what Jones would later describe as an “out-of-body experience.”

“I'm thinking it's not a serious hug, not realizing I just got through playing football. The president is not that heavy. I didn't realize I picked the man up,” Jones said in an interview this week at his office at Joint Expeditionary Base Little Creek.

The academy's sports information department said he was listed as 6-foot-2, 235 pounds when he played football.

“My sister thought I was going to get shot, my mom was trying to take pictures and my dad was like 'What the hell is he doing?' “

A lot of people laughed. Navy leadership did not. An officer on stage physically pulled Jones off the president by his uniform.

Images of Jones circulated in newspapers and on cable television broadcasts around the world.

Just days after one of the happiest moments of his life, Jones was called in for a meeting by the academy's leadership to learn there was a price to pay for his jubilation. First, he was yelled at by a Marine general who slammed down a copy of the Washington Post with Jones on its front page.

Then he learned his first assignment would no longer be in Annapolis coaching football at the academy's prep school like he planned. He was going straight to Japan.

But first he had to write apology letters to the Navy's top brass, from the Secretary of the Navy on down. He wrote letters for days.

“At first I was mad about it. I was very mad,” said Jones. “But that was the other lesson I learned in the Navy and it stuck with me: accountability.”

Navy leaders never gave up on Jones. Neither did his parents. They saw potential in him even when he didn't see it in himself. He said he never thought about leaving the academy except during Christmas break his plebe year when he spoke with a friend playing college football elsewhere about how vastly different their experiences were.

“My parents didn't give me that option. I knew better. And looking back in retrospect, I'm kinda glad I stayed there and fought through it,” he said.

He not only managed to graduate after struggling with time management between the classroom, football and military responsibilities, but he also bounced back from that rocky start to his career after graduation.

He was one of four graduates singled out by Bush for praise four years later during the Class of 2005's commencement address for serving aboard the dock landing ship USS Germantown while supporting anti-terrorism efforts in the Philippines.

“Bobby was the anchorman of the Class of 2001. He was the guy that gave me that bear hug. Four years later, my ribs still hurt. So don’t get any ideas,” Bush told graduates that day.

“Here’s what Bobby says, 'Once I got to my ship after 9/11, it did not matter where I graduated. The expectations of Annapolis graduates never change. And I’m proud to be a part of the elite and unique tradition of the United States Naval Academy.' I want to thank Bobby for his service and thank Bobby for witnessing your graduation today.”

His reputation had been repaired enough at the academy that he even worked there as a recruiter for awhile before taking on a variety of assignments that included becoming a United Nations peacekeeper in Liberia and working at the Missile Defense Agency in Colorado as its lead war games planner.

He's achieved the rank of commander and is now married with two children. Jones said he's living the American dream and that he owes it all to the Navy. He got a free undergraduate and graduate degree. He married his wife at the Naval Academy chapel. His children were born at Naval Medical Center Portsmouth. He loves his job.

“Everything I needed to be successful in my adult life and not just be a citizen, but a contributing member of society, the United States Navy has given me,” he said. “I don't know what I'd be doing without this.”

Jones and Bush have kept in touch over the years. He still has the signed golf ball Bush gave him on his graduation day and pictures of the two when they later met in Annapolis that didn't land him in hot water.

He plans to invite Bush to his change of command ceremony in a couple of years when he takes over as the commanding officer of Coastal Riverine Squadron Four. The squadron provides harbor security, escorts high-value assets like submarines and aircraft carriers, and conducts maritime and security operations in coastal and inland waterways.

It's been a good career for someone who wasn't even sure he'd graduate on time until about a week before the ceremony.

But during Jones' graduation, Bush privately told him not to worry about his GPA. After all, Bush said, he had gotten Cs in college and he was the president.

These days, it's Jones offering similar reassurances to midshipmen and younger sailors. He's not ashamed of his GPA – a 2.06 – and uses it to inspire people going through a tough time, possibly for the first time.

“Ever since graduating there I've always met every year two or three midshipmen that are struggling through the place that think the world is going to end. And I'm like, 'Well, let me tell you a story.' And I tell them my story and I literally show them my grade-point average and they're like, 'Oh my god, you graduated with that?' I'm like, 'Yes. Yes, I did.' So it's not that bad.”

If anyone needs proof, Jones can show his class ring from Annapolis. Each ring has “2.0” emblazoned on it: the GPA required to graduate.

It's not just midshipmen he inspires, either.

One of his friends he went to grade school with in Atlanta would later say Jones changed her life when they met in the seventh grade.

She was one of the friends at the University of North Carolina that made him consider transferring there. She's Brooke Baldwin, a CNN anchor who produced a segment about their friendship and later visited him aboard the Anzio while it was deployed for another story.

Jones was one of only a handful of black students at their elite private school when they met. She said they bonded over their different tastes in music and he taught her the importance of being open to different perspectives and being fair. Jones said that was also a lesson he had to learn as a student where he seemingly had little in common with his mostly white, more affluent classmates.

“I've learned you can't judge people who are well off just because they're well off,” Jones said. “You know, everybody has problems, no matter what your financial, socio-economic background is. The other thing, too, is when I went out for football my junior year is that you can define a family in more ways than just blood. The football team that I was there with took me in.

“And it's one of the influencing factors of why I went to Annapolis to go to school as opposed to some of the big state football schools at the time.”

On the sidelines of that same high school football field was Baldwin, who was a cheerleader, watching and learning from him.

“He, without even probably realizing what he was doing, was teaching me. Rashad helped teach me – and still does – how to be a better human being,” Baldwin said in her CNN segment. “How lucky am I?”