The Trump administration is considering sheltering unaccompanied immigrant children apprehended along the southwest border at Fort Benning, the sprawling Columbus-area military installation, according to the Pentagon and U.S. Health and Human Services Department 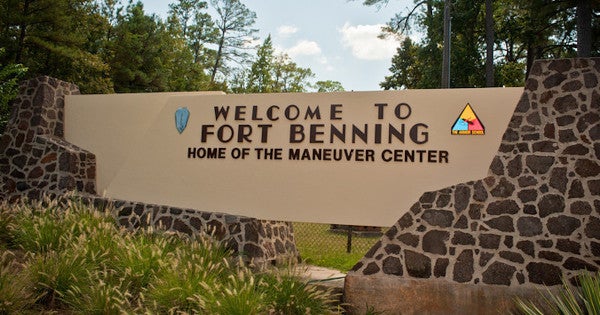 The Trump administration is considering sheltering unaccompanied immigrant children apprehended along the southwest border at Fort Benning, the sprawling Columbus-area military installation, according to the Pentagon and U.S. Health and Human Services Department.

It is unknown how many children could be housed there and for how long. But Acting Defense Secretary Pat Shanahan approved a request from the Department of Health and Human Services in April for the Pentagon to find space for up to 5,000 at military bases.

Officials from both departments are preparing to tour “unused property” at Benning Wednesday, said a Health and Human Services official. Malmstrom Air Force Base in Montana and Fort Sill in Oklahoma are also being considered, according to the Pentagon.

The move comes as the government is scrambling to care for tens of thousands of children under 17 who are crossing the U.S.-Mexican border without parents and who have no legal status in the United States.

Once they are apprehended, the children are transferred to the care of Health and Human Services' Office of Refugee Resettlement. That office cares for them until they are released to sponsors — usually parents or other relatives — while their immigration cases are heard.

As of April 30, the agency had received referrals for about 40,900 such children this fiscal year, an increase of more than 50% from the previous year.

A child stands on a pavement adorned with chalk drawings at the El Chaparral U.S.-Mexico border crossing, in Tijuana, Mexico, on Wednesday, May 2, 2018.(Associated Press/Hans-Maximo Musielik)

Acting Homeland Security Secretary Kevin McAleenan told reporters Friday that illegal crossings along the southwest border are overwhelming his department's resources and that federal immigration authorities now have more than 80,000 people in custody, “a record level that is beyond sustainable capacity with current resources.” Since December, five Guatemalan children have died after being apprehended by U.S. border agents.

During a news conference in London with British Prime Minister Theresa May Tuesday, President Donald Trump vowed to press forward with 5% tariffs on all goods imported from Mexico next week as a way to clamp down on illegal border crossings. The tariffs are set to go into effect Monday.

“I think it's more likely that the tariffs go on, and we'll probably be talking during the time that the tariffs are on, and they're going to be paid,” Mr. Trump said, adding that Senate Republicans would be “foolish” to try and block the move.

Senate Majority Leader Mitch McConnell warned, “There is not much support in my conference for tariffs, that's for sure.”

Fort Benning on Tuesday referred questions to the Health and Human Services and Defense departments.

Health and Human Services said in a prepared statement sent to The Atlanta Journal-Constitution Tuesday that its Office of Refugee Resettlement “is expanding its capacity to provide temporary shelter for unaccompanied alien children.”

“Due to the crisis on the southern border, ORR is facing a dramatic spike in referrals of” unaccompanied children, the agency said.

Maj. Chris Mitchell, a Pentagon spokesman, said sheltering the children at Fort Benning would have no impact on the military's readiness or its “ability to conduct its primary missions.”

“It is tragic to know that there are that many children who are separated from their families in the custody of the United States, and it just speaks to the fact that we have to do something about our immigration challenge and what is going on at our border,” said Tomlinson, a Democrat who is running for Republican U.S. Sen. David Perdue's seat.

She added she was heartened to learn the military installation is being considered as a shelter site “because I know the great men and women at Fort Benning. If they will have anything to do with it, they are going to get extraordinary care and attention.”

Perdue said Tuesday he was unaware of the Fort Benning visit, and that he would need to consult with federal officials before weighing in on the viability of the military base.

“We've got to do something because these minors are in a situation down there right now where we've been overwhelmed,” he told The AJC.

SEE ALSO: Up To 20,000 Migrant Children Could Be Sheltered On US Military Bases