"As the American people always show in challenging times, when hardship comes, Americans come together. We rise to the challenge." 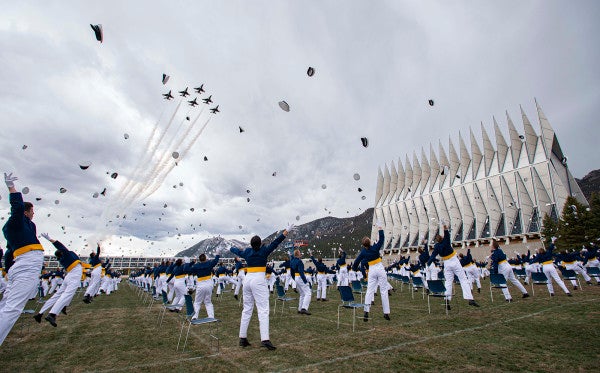 At an Air Force Academy graduation unlike any other in the school’s storied history, cadets sat 8 feet apart, their faces uncovered, as Vice President Mike Pence told them a weary nation needs their leadership now more than ever.

“America is being tested,” the vice president told 967 graduating cadets. “While there are signs that we are making progress in slowing the spread, as we stand here today, more than 700,000 Americans have contracted the coronavirus and tragically more than 37,000 of our countrymen have lost their lives.

“But as each of you has shown in your time here,” he went on, “and as the American people always show in challenging times, when hardship comes, Americans come together. We rise to the challenge. The courage, compassion and generosity of the nation you will defend are shining through every day.”

“We will get through this. We will protect our most vulnerable people. And we will heal our land,” Pence told the academy’s Class of 2020.

Graduating weeks ahead of schedule, the cadets traded in Falcon Stadium, the usual graduation location, for an outdoor pavilion near the academy chapel. They did not march to receive their diplomas and no spectators were allowed to attend.

The Air Force Thunderbirds performed their traditional flyover of the ceremony but did not perform their usual aerobatics demonstration. And after the Thunderbirds took flight over an unusually quiet academy, graduates jumped and cheered in place, but could not hug or shake hands. Some waved to classmates instead.

The class of 2020 was historic even before coronavirus precautions drastically changed Saturday’s ceremony. Eighty-six graduates will now go on to serve as officers in the new Space Force, the first class of academy graduates to do so.

“You, if deterrence fails, will fight and win the battle for space superiority,” said Gen. John “Jay” Raymond, the Space Force leader, during Saturday’s remarks, “which is so vital to our nation, to our allies, and our joint coalition forces.”

The graduation was given an exception from the state’s stay-at-home orders and ban on gatherings because it occurred at a federal institution and because military members are essential employees.

“Governor Polis congratulates the Air Force Academy cadets on their commission as second lieutenants in the United States Air Force and United States Space Force,” said the governor’s press secretary in the days before the event. “The academy will be practicing good social distancing and he hopes they stay safe during this challenging time for our state and country.”

Polis and Pence spoke for five minutes on a Colorado Springs tarmac before the graduation, according to a White House pool report. They did not shake hands due to social distancing restrictions. Polis wore a mask with the Colorado logo on the front; the vice president did not wear a mask as they spoke.