As director of the CIA, Mike Pompeo reportedly set up small teams of commandos to kill suspected terrorists, according to a... 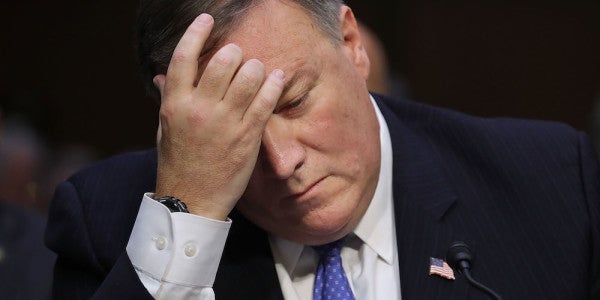 As director of the CIA, Mike Pompeo reportedly set up small teams of commandos to kill suspected terrorists, according to a report by BuzzFeed News.

Pompeo, who has said the agency would become more “aggressive” and “vicious,” pushed for such lethal operations after he took over the agency in January 2017. The military and the National Security Council were initially resistant to the plan, according to BuzzFeed News, but the proposal was eventually approved.

“They are getting people on targeting lists,” one of the sources told BuzzFeed News. “Small teams are locating and killing bad guys. That's what we are doing.”

“It's a small number where it has been kinetic, but it is happening,” another source, a former intelligence official with knowledge of the program, told BuzzFeed News.

The two sources also told BuzzFeed News that Pompeo “pushed for the capabilities and the authorization to launch lethal ground operations.”

The operations are being coordinated by the agency's Special Activities Center, which manages the CIA's paramilitary activities. The current head of the SAC, a former aide to both Pompeo and his predecessor, John Brennan, is a former commando who has pushed for more aggressive operations, including the use of the SAC to kill terrorists.

While the Obama administration halted a CIA effort to start a similar program in 2009, it did expand drone strikes, which the CIA continues to use.

The SAC only has about 100 members, but their ranks have grown under President Donald Trump.

The CIA denied that the agency was running such a program, with a spokesman telling BuzzFeed News, “Your story is wrong.”

Haspel, who would be the first woman director in CIA history, reportedly oversaw a secret CIA prison in Thailand where a terrorism suspect was waterboarded. She also reportedly drafted orders to destroy video evidence of torture

Both Pompeo and Haspel will need Senate confirmation to take their new positions.