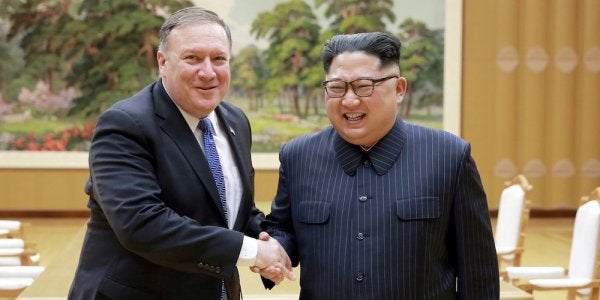 Secretary of State Mike Pompeo reportedly shared a mutual laugh with North Korean leader Kim Jong Un on their first meeting that he would go on to describe as a success — despite joking that he was trying to kill Kim.

North Korea makes no secret of its distaste for the U.S. and its various military and spy services. While Pompeo was the head of the CIA, North Korea accused the organization of trying to assassinate Kim.

But Kim's fears were not unfounded. The U.S. maintains it does not plan for decapitation, or regime-change oriented strikes against foreign governments, but it's been constantly dogged by tales of U.S. Navy SEALs training with South Korean soldiers to kill Kim.

Also, Pompeo dropped heavy hints in July 2017, right after North Korea began testing missiles that could hit the U.S., that he'd like to separate Kim from power.

So when the two men met in April, they didn't take long to address the elephant in the room.

Pompeo then reportedly joked that he was still trying to kill Kim, and the two men laughed, Tracey writes.

Later, the two would pose for photos together. Pompeo would go on to make security assurances to North Korea and wave before them the prospect of U.S. investment in exchange for denuclearizing, which has yet to materialize.

A Japanese paper later reported that Kim had praised Pompeo for his bravery during that meeting.

“This is the first time I have met someone with the same kind of guts,” Kim reportedly said of Pompeo.