The U.S. is aligning its South China Sea policy with a 2016 international arbitration tribunal ruling and officially rejecting many of China's claims to the contested waterway, Secretary of State Mike Pompeo said Monday 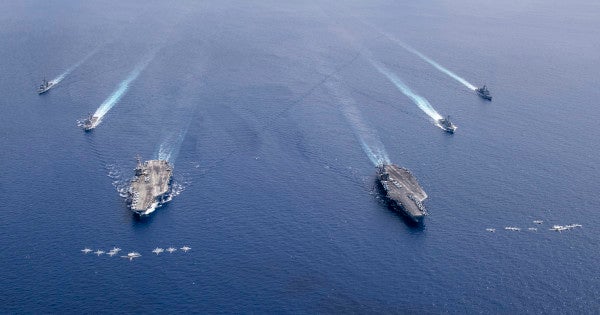 The U.S. is aligning its South China Sea policy with a 2016 international arbitration tribunal ruling and officially rejecting many of China's claims to the contested waterway, Secretary of State Mike Pompeo said Monday.

“Beijing's claims to offshore resources across most of the South China Sea are completely unlawful, as is its campaign of bullying to control them,” Pompeo said.

“Beijing uses intimidation to undermine the sovereign rights of Southeast Asian coastal states in the South China Sea, bully them out of offshore resources, assert unilateral dominion, and replace international law with 'might makes right,'” he said

He added that “the PRC's predatory world view has no place in the 21st century.”

China, Vietnam, the Philippines, Taiwan, Malaysia, and Brunei all have overlapping claims to the strategic South China Sea, but Beijing's claims are by far the largest, encompassing most of the waterway. Among the various claimant states, China has most aggressively asserted its disputed sovereignty.

China has sought to solidify its expansive claims to the region through the construction of artificial islands and military outposts, as well as increased military activity in the area, despite a 2016 ruling by an international arbitration tribunal rejecting many of China's claims.

Beijing has refused to recognize the decision, which sided with the Philippines, rejecting both the ruling and the authority of the tribunal to weigh in on the dispute.

Even before the release of Pompeo's statement, the U.S. has repeatedly said China's claims to the South China Sea as “unlawful,” most recently in a Department of Defense statement condemning Chinese military exercises near the Paracel Islands, territories China seized from Vietnam.

Related: The Navy rocked back-to-back dual carrier operations in the Pacific to send a message to adversaries

“The world will not allow Beijing to treat the South China Sea as its maritime empire,” Pompeo said. “We stand with the international community in defense of freedom of the seas and respect for sovereignty and reject any push to impose 'might makes right' in the South China Sea or the wider region.”

The latest move by the U.S. is likely to further escalate bilateral tensions and raise the risk of confrontation in the South China Sea, where the U.S. and China have had several risky run-ins in recent years.