"We still don't have a clear understanding of why this is taking so long," one Senate aide said. 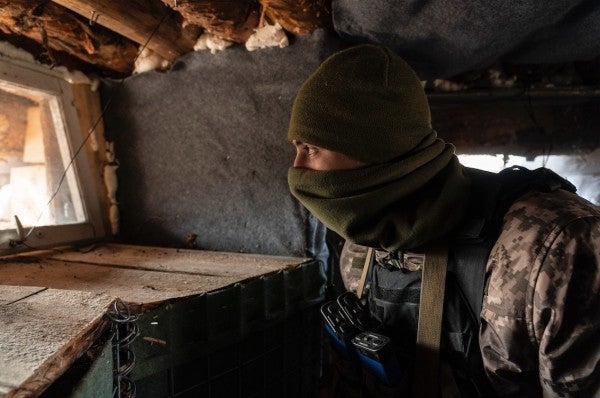 More than $20 million of the Pentagon aid at the center of the impeachment fight still hasn't reached Ukraine.

The continued delay undermines a key argument against impeachment from President Trump's Republican allies and a new legal memo from the White House Office of Management and Budget.

Initially, Trump directed officials to withhold roughly $400 million in assistance to Ukraine as he and aides pressured its new government under President Volodymyr Zelensky to open investigations into Trump's political rivals. The White House released the hold on the aid in September, but not before sparking a whistleblower complaint that led to the impeachment inquiry.

On Thursday, as lawmakers on the House Judiciary Committee debated articles of impeachment, Republicans on the panel continued to assert that Trump did not abuse his power because the aid was released before Ukraine's new government announced any investigations.

“They got the money on Sept. 11,” Rep. Jim Jordan (R-Ohio) said of Ukraine in the Thursday hearing. “That's what happened. You can make up all the things you want, but those are not the facts.”

But $20.2 million of the Pentagon's $250-million portion of the aid has yet to reach Ukraine and remains in U.S. accounts, according to the Department of Defense and Senate aides.

The OMB also released a new legal memo Wednesday night arguing it did not violate the law because the aid to Ukraine was released after a temporary pause “to study whether the spending complied with U.S. policy.”

“At no point during the pause” did Defense Department lawyers tell the OMB that the hold on the Ukrainian funding “would prevent DOD from being able to obligate the funds before the end of the fiscal year,” according to the memo, first reported by the Washington Post. Accordingly, the memo asserts, withholding the aid had little impact.

Several OMB officials resigned in part due to their concerns that the withholding was illegal, and witnesses from the Defense Department and other parts of the administration testified publicly in the impeachment inquiry that there was widespread concern that the aid could not be spent by Sept. 30, the end of the fiscal year, and would expire.

When the Trump administration ultimately dropped its hold on the aid on Sept. 11, Republican and Democratic lawmakers alike had to scramble to save the money. Just days shy of the deadline, they passed — and Trump signed into law — a yearlong extension to allow the Pentagon to disburse the aid. But in late November The Times reported that $35.2 million of the initially withheld Ukraine assistance still sat in the U.S. Treasury.

About $15 million has since been contracted out, leaving $20.2 million remaining in U.S. accounts, according to the Pentagon and Senate aides.

Pentagon spokesperson Lt. Col. Carla M. Gleason told The Times on Thursday that the remaining Ukraine aid that has yet to be transferred to the U.S. military services and contracted out “will be implemented as quickly as possible in accordance with contracting procedures and applicable law,” echoing earlier statements from October and November.

Letters from lawmakers to Defense Secretary Mark Esper and other officials seeking answers on the continued delay to disbursing the aid to Ukraine have gone unanswered, according to the Senate aides. A federal judge separately ruled late last month that the Defense Department and OMB must provide documentation regarding the aid holdup by Thursday in response to public records requests.

“We still don't have a clear understanding of why this is taking so long,” one Senate aide said.

Gleason said the delay was due to requirements in the law that granted the Pentagon the extension to spend the Ukraine aid.

“Specifically, we needed to reach out to prospective vendors to obtain updated pricing data,” she said. “Delays in obtaining this information is impacting our overall time lines.”

But Senate staffers said that law contained no such requirements for the Pentagon to essentially start over on contracts.

Meanwhile, the Ukraine aid remains a political football in the impeachment fight.

At Thursday's hearing, where members are expected to approve forwarding the impeachment articles for a full House vote, Republicans continued to argue that Trump was doing his job by withholding aid because of corruption concerns.

Several Democrats noted that Trump didn't hold up millions of dollars in similar congressionally approved aid for Ukraine in his first two years in office. And the attempts to get Ukraine to investigate Ukrainian energy company Burisma and board member Hunter Biden, former Vice President Joe Biden's son, only began after polls showed the elder Biden beating Trump in the 2020 presidential election, Democrats said.

Rep. Andy Biggs (R-Ariz.) responded that what changed is that Ukraine elected a new president, and Pentagon assurances that the money would be properly spent came under the previous administration. He said Trump released the aid on Sept. 11 after Zelensky had signed new anti-corruption policies a few days before.

“There was a concern whether Mr. Zelensky was the real deal,” Biggs said.

The Defense Department certified to Congress on May 23 that Ukraine had made the progress on corruption that was legally required to get the aid released — more than a month after Zelensky won the presidency and days after his inauguration. That was two months before his July call with Trump that kicked off the historic events expected to culminate in a vote next week by the Democratic-led House to impeach the U.S. president.