A staggering report from the Military Times concludes that accidents involving all aircraft of the U.S. military rose 40% between the 2013... 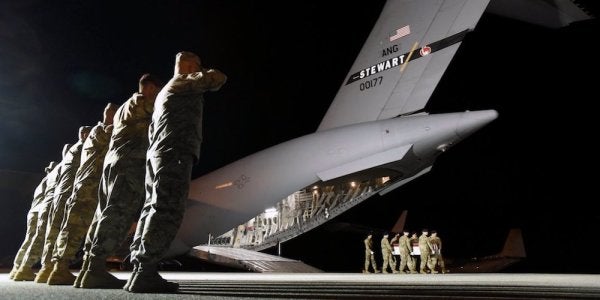 A staggering report from the Military Times concludes that accidents involving all aircraft of the U.S. military rose 40% between the 2013 to 2017 fiscal years, and that those accidents resulted in the deaths of at least 133 servicemembers.

The accidents are likely tied to the massive budget cuts that Congress put in place during the sequestration, as well as to an increase in flight hours despite a shortage of pilots.

The report is the first time the deadly crashes have been mapped against the sequester, showing the effect budget cuts may have on the military, according to Military Times Pentagon Bureau Chief Tara Copp, who authored the story.

Approximately 5,500 accidents occurred in the four year period, but the Military Times database records 7,590 accidents that have happened since 2011. They were divided into three categories: Class A, Class B, and Class C.

In addition to the cost of life, the various categories also take financial costs into account. Class A accidents cost the most, at $2 million or more. Class-B follows at $500,000 or more, and Class C at $50,000 or more.

For 10 of the last 11 years, the military was funded through continuing resolutions under the Budget Control Act, which was signed in 2011. As the sequestration efforts ramped up in 2013, the military saw more cuts.

The budget cuts due to the sequestration efforts have long angered many in the Department of Defense. Secretary of Defense Jim Mattis said in February that “no enemy in the field has done as much to harm the readiness of U.S. military than the combined impact of the Budget Control Act's defense spending caps.”

“Hopefully someone in Congress will wake up and realize things are bad and getting worse,” an active duty Air Force maintainer, who has worked on A-10s, F-16s, and F-15s, told Military Times. “The war machine is like any other machine, and cannot run forever. After 17 years of running this machine at near capacity, the tank is approaching empty.”

The Air Force has responded to the report with an announcement that they have launched an investigation into the large amounts of Class C accidents. They also stressed that Class A incidents have been on the decline.

“Any Class A accident is one too many,” Air Force Vice Chief of Staff Gen. Stephen “Seve” Wilson said in an interview with Military.com.

“The safest year ever was 2014, and 2017 was our second safest year, so our Class A mishaps have been trending down,” he added.