Teen Arrested Near New York Military Base Had Hundreds Of Bullets, A Drone, And Fireworks

New York State Police justified the strong police response to an Idaho teenager who brought a handgun to the Niagara... 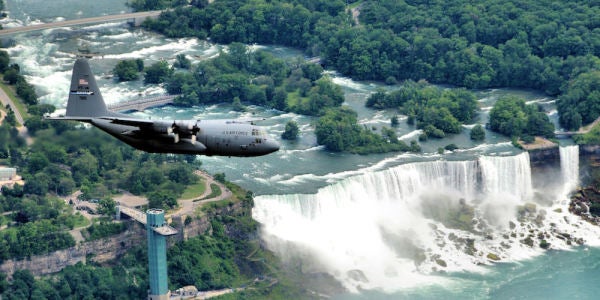 New York State Police justified the strong police response to an Idaho teenager who brought a handgun to the Niagara Falls Air Reserve Station in June, despite a judge's opinion that calling out the bomb squad was “over the top.”

Police arrested Simeon W. Brovont, who had hundreds of rounds of ammunition in his 2003 Toyota Corolla, along with a drone and several objects that looked like blasting caps but turned out to be fireworks, Trooper James O'Callaghan said.

“We feel very convinced that we had done the job that was appropriate for the things that we saw,” said O'Callaghan, the public information officer for Troop A who also was a member of the security detail that screened visitors who sought to park at the air base for the Thunder Over Niagara air show June 10.

At Brovont's sentencing Oct. 11, Niagara County Judge Sara Sheldon said calling out the bomb squad to deal with the gun arrest was “over the top.”

None of the information about the ammunition, the drone and the fireworks came out during the court proceeding, nor was it included in a news release the State Police issued at the time of the arrest.

Police found the gun and most of the bullets in the trunk of the car, where a search quickly turned up the other items.

“There was not a round in the chamber,” O'Callaghan said.

But police found hundreds of rounds, some in a box and others in little plastic containers.

“Around that weapon, now you see a drone,” O'Callaghan said. “Is it illegal to own a drone? No, but he's got a drone and a firearm and he's got batteries all taped together. He possesses a plastic bin, something you put nuts and bolts in of different sizes. He's got bullets, little red cylinder-shaped pieces with a wick on them, looks very similar to blasting caps with no identifications on them. At face value, this looks like a very serious thing.”

Troopers also noted Brovont's reaction – or lack of one.

“Once we determined he had those weapons and started the questioning process, his demeanor didn't change,” O'Callaghan said. “Most people worry or at least get anxious or nervous, start to sweat, start to panic a little bit. That was not the case. He was very collected, kind of cool. The person is not reacting like a normal person put in those circumstances would react.”

So the troopers on the scene decided to call for the bomb squad.

Brovont pleaded guilty Sept. 11 – without waiting to be indicted – to a felony count of attempted second-degree criminal possession of a weapon for having the unregistered handgun.

That erased his guilty plea. Sheldon then sentenced Brovont, who had been in the County Jail since the arrest, to time served.

The court file is sealed, so it is unclear how much information it contains about what was found in the 2003 Toyota Corolla.

A pre-sentencing report, also sealed, was compiled by a Niagara County probation officer and submitted to the court. Sheldon said from the bench that it recommended incarceration, and the prosecutor pushed for that.

“I can't reveal what was in the PSI (presentencing investigation),” Greenman said. “But you should trust that the judge knew about everything. She is very thorough.”

“I see a history of a young man from a good family who's never done anything wrong,” Sheldon said during the sentencing. “I just don't have the heart to pile on. This is not a dangerous young man.”

Sheldon also said, “I think he pled to too high a felony.”

But she also acknowledged the situation police faced.

“In this heightened state we live in now, can you imagine the fear of bringing a firearm onto a military base?” Sheldon asked from the bench.

“At the end of the day, we want to make sure that we do our job to the fullest,” O'Callaghan said.