‘The base that I'm on has shut down. However, the school house where I'm training is mission critical, so we are going to keep training. I can’t go home to Florida … so I’m stuck in a motel.’ 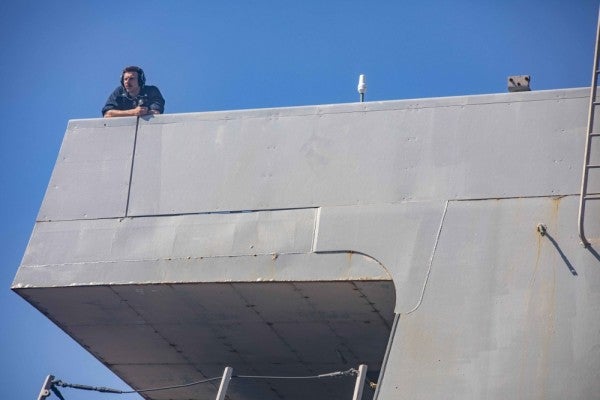 Years later as a Navy officer, he's dealing with something much more challenging — going about his duties amid restrictions due to the coronavirus.

Davis is a 12-year Navy veteran who rose up to E-7 in the enlisted ranks before becoming an officer last year. He is an ensign who is assigned to the Aegis Training Readiness Center in Dahlgren, Virginia, where he is training to become a Tactical Action Officer on a warship.

Many functions even when it comes to the military have been shut down due to the COVID-19 pandemic.

“To be honest, it's making life a little tough,” Davis said. “So the base that I'm on here has shut down. However, the school house where I'm receiving training has been deemed mission critical, so we are going to keep training.”

“I can't go outside of 50 miles from the base, which means I can't go home to Florida on the weekends and I can't come down to see my mom in North Carolina. So I'm stuck in a motel in the middle of nowhere alone and bored out of my mind.”

Dahlgren is two and a half hours north of Norfolk and an hour from Washington, D.C.

A history of success

In his early days, Davis made a name for himself on the gridiron and as a sprinter for the track team. As a senior, he won four gold medals at the 2002 1-A state meet.

In one of his most famous performances, Davis carried the ball 50 times for 363 yards in Thomasville's 29-28 win over Albemarle in 2001. The 50 carries are listed as sixth all-time for a single game in the NCHSAA record book.

“Trevan is one of the toughest individuals I have ever coached,” said Benjie Brown, who was Thomasville's coach from 2000-06. “I saw him that weekend after the game. I know he was willing to do whatever it takes for his team and now his team is the Navy.”

Davis has a copy of that game on video.

Davis went on to play wide receiver at Catawba, where he was joined by fellow Bulldog and current Central Davidson coach Clayton Trivett.

He eventually found his way to the Navy and worked his way up through the ranks, serving on various warships.

“While I was enlisted, I was a Chief Operations Specialist,” Davis said. “A pretty diverse rate. We track ships, aircraft, subs and a few other things.”

The most recent ship Davis served on was the USS Roosevelt, an Arleigh Burke-class destroyer homeported in Mayport, Florida.

When he transferred off the USS Roosevelt, he went to the Afloat Training Group in Mayport. Davis then got his commission through the Limited Duty/Chief Warrant Officer program, which required an E-6 or E-7 rating. He did not have to attend Officers Candidate School. He learned of his selection while on assignment in Bahrain.

“We don't have to do boot camp all over again like the OCS guys,” Davis said. “We are all subject matter experts.”

He was commissioned in September.

“Trev, he was a great kid, a great competitor,” said Brown, who is currently the head football coach at Montgomery Central. “… I knew he had a great work ethic and I had no doubt he would be successful in whatever endeavor he decided to do.”

That eventually led to his assignment in Dahlgren, where he has been the last three weeks. He is scheduled to graduate May 8, but that is subject to change because of the COVID-19 situation.

“I may be stuck here longer,” Davis said. “Still trying to find a work around when it comes to that.”

Right now, it's about coping.