Some children of US troops born overseas will no longer get automatic American citizenship, Trump administration says

Children born to U.S. service members and government employees overseas will no longer be automatically considered citizens of the United States, according to policy alert issued by U.S. Citizenship and Immigration Services (USCIS) on Wednesday. 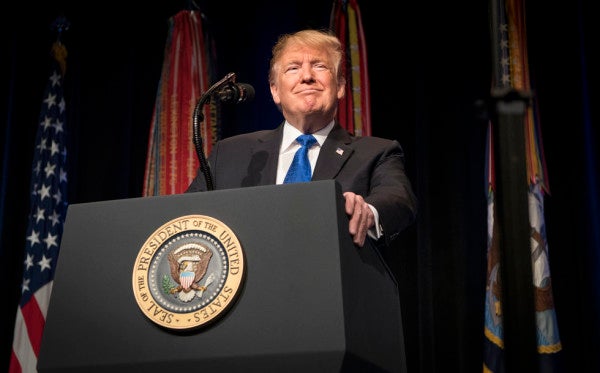 Some children born to U.S. service members and government employees overseas will no longer be automatically considered citizens of the United States, according to policy alert issued by U.S. Citizenship and Immigration Services (USCIS) on Wednesday.

Previously, all children born to U.S. citizen parents were considered to be “residing in the United States,” and therefore would be automatically granted citizenship under Immigration and Nationality Act 320. Now, children born to U.S. service members and government employees who are not yet themselves U.S. citizens, while abroad, will not be considered as residing in the U.S., changing the way that they potentially receive citizenship. Children who are not U.S. citizens and are adopted by U.S. service members while living abroad will also no longer receive automatic citizenship by living with the U.S. citizen adopted parents.

“The policy change explains that we will not consider children who live abroad with their parents to be residing in the United States even if their parents are U.S. government employees or U.S. service members stationed outside of the United States, and as a result, these children will no longer be considered to have acquired citizenship automatically,” USCIS spokesperson Meredith Parker originally told Task & Purpose on Wednesday, when asked how the policy changes how the government views children of U.S. service members.

“For them to obtain a Certificate of Citizenship, their U.S. citizen parent must apply for citizenship on their behalf,” she added. The process under INA 322 must be completed before the child's 18th birthday.

According to USCIS, previous legislation also explicitly said that spouses of service members who were living outside the U.S. because of their spouses were considered residing in the U.S., but “that no similar provision was included for children of U.S. armed forces members in the acquisition of citizenship context is significant.”

That is one of the reasons why USCIS has now decided that those children are
not considered to be residing in the U.S., and therefore will not be automatically given citizenship. Instead, they will fall under INA 322, which considers them to be residing outside the U.S. and requires them to apply for naturalization.

They will be allowed to complete all naturalization proceedings while living abroad, the document said.

Following publication of this story, U.S. government officials were forced to address widespread concern about how this policy change affects children of U.S. service members. Ken Cuccinelli, Acting Director of USCIS, said in a statement that “this policy update does not affect who is born a U.S. citizen, period.”

“This only affects children who were born outside the United States and were not U.S. citizens. This does NOT impact birthright citizenship. This policy update does not deny citizenship to the children of US government employees or members of the military born abroad,” he added, though Task & Purpose did not report that citizenship would be denied. “This policy aligns USCIS' process with the Department of State's procedure, that's it.”

A USCIS official further clarified the original statement for Task & Purpose after publication.

The official clarified that there is no change to the acquisition of citizenship at birth, “whether to U.S. citizen military members abroad or to anyone else.”

For example, if a service member or government employee who is not yet a citizen is deployed overseas and has a child with another non-U.S. citizen while deployed, their child is not a citizen under the existing law. And were that service member to become a citizen while in the service and still living abroad, that child will no longer receive automatic citizenship by living with them; originally, that child was considered as “residing in the United States” if they were a permanent resident and were living with a U.S. citizen parent abroad. That is no longer the case, because it has differed with policy from the State Department, and according to USCIS, didn't adhere to the statutory text.

However, the child in this scenario would become a citizen if they were to receive a green card and move back to the U.S. — “residing in the United States” — and live there with their U.S. citizen parent. This child could also become a citizen while still abroad if their parent becomes a U.S. citizen, and proceeds to apply for their child's citizenship on their behalf.

U.S. citizen service members who adopt a child while overseas can apply for citizenship for their child, and go through the entirety of the process while abroad.

The official added that this policy change is expected to impact “very few people a year.” Applications received before the date that the new policy takes effect, October 29, will be treated under the old policy.

While children of service members will be allowed to complete the citizenship process outside of the U.S., Parker added, children of government employees “must enter the U.S. lawfully with an immigrant or nonimmigrant visa and be in lawful status when they take the Oath of Allegiance.”

You can read the full
USCIS policy alert below (the relevant section is pages 7-8):

Editor's note: This story has been updated with additional clarification on the policy and exactly which service members it affects, as well as a statement from the acting director of USCIS. It has been changed to reflect that “some” U.S. service members, not “all,” would be affected by the policy change, which was not accurately reflected in the original statement emailed by a USCIS spokeswoman.