Jessica Kensky and her husband Patrick Downes were gravely wounded during the Boston Marathon Bombing on April 15, 2013, each … Continued 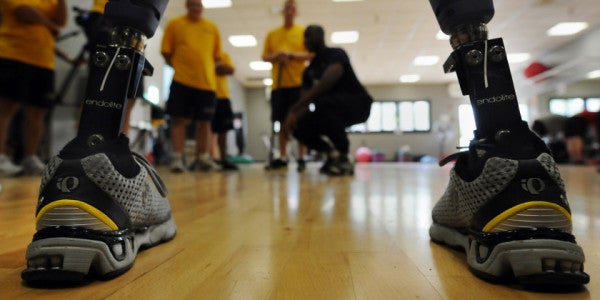 Jessica Kensky and her husband Patrick Downes were gravely wounded during the Boston Marathon Bombing on April 15, 2013, each losing their left leg in the blast. In the ensuing months, Kensky struggled during recovery, her remaining right leg causing extreme pain and discomfort, until she started to consider whether or not she should have the leg amputated.

That’s when she met Ferris Butler, a veteran and double amputee who lost his legs serving in Iraq. Through that friendship, Kensky was able to receive a level of care that had been previously beyond her reach. She was admitted to Walter Reed National Military Medical Center in Washington, D.C. It was there that she began to see the shared experiences, and shared strengths of other amputees — soldiers and veterans, wounded overseas, who in turn supported Kensky and her husband, two civilians wounded in a war that came home.

This incredible story from the Boston Globe offers an update of the victims of the terror attack in Boston, and a glimpse at how developments in medicine and technology from Iraq and Afghanistan can help people back on the homefront.