A decision handed down recently in a military appellate court sheds light on a sexual scandal that rocked Marine Corps... 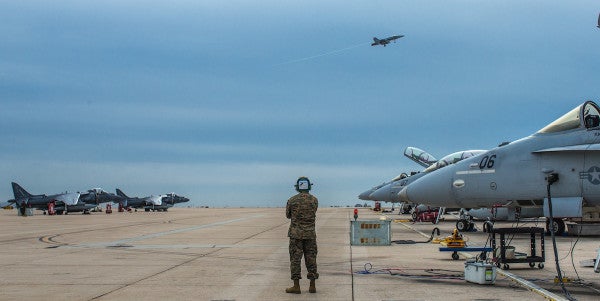 A decision handed down recently in a military appellate court sheds light on a sexual scandal that rocked Marine Corps Air Station Miramar last year, detailing a senior enlisted leader’s escapades with a superior officer in their offices and inappropriate dalliances with his junior troops.

A tribunal at the United States Navy-Marine Corps Court of Criminal Appeals has refused to vacate the conviction of ex-Master Sgt. Frederico A. “Rico” Williams, a 21-year veteran of the service and one of Miramar’s senior enlisted leaders before his Jan.16, 2016, court-martial conviction and dramatic fall from power.

A Marine jury — called a “panel” in the military — found him guilty of disobeying a lawful general order, uttering a false official statement, adultery, larceny and obstructing justice. He was sentenced to six months in the brig, busted down to private and evicted from the corps on a bad-conduct discharge, which prevented him from retiring from the service and collecting military pension and U.S. Department of Veterans Affairs benefits.

In his appeal, Williams, 41, of San Diego, argued that his transgressions were minor and the discharge too severe, but the three judges disagreed and said the punishment fit the litany of crimes he committed.

“This characterization of (his) misconduct demonstrates failure to grasp its true impact, and to understand how inimical it is to military service,” wrote Navy Capt. Colleen Glaser-Allen, the chief judge, in her 10-page opinion. “Senior enlisted noncommissioned officers like the appellant are the backbone of the Marine Corps and the naval service as a whole — and as such, have a particular responsibility to lead by example.”

Reached by telephone, Williams said he was disappointed by the ruling but knew he did wrong. He vowed to appeal the decision to the United States Court of Appeals for the Armed Forces in Washington, D.C. In the meantime, a separate case is percolating through the Naval Clemency and Parole Board.

“I definitely have a sour taste in my mouth. I sat in the brig for six months and wasn’t allowed to retire from the Marine Corps after a good 21-year career,” he said.

Married in 2008, Williams was posted to Marine Wing Headquarters Squadron 3 at Miramar’s 3rd Marine Aircraft Wing four years later. He served as both the maintenance management chief and one of the most senior non-commissioned officers inside the Wing, responsible for overseeing supplies flowing to mechanics.

During an investigation into a discrimination complaint against other senior leaders, a witness mentioned a problem in a $332 travel claim Williams submitted for a trip to Arizona’s Marine Corps Air Station Yuma. According to the corps, his claim was based on a forged letter stating that there was no on-base lodging for Williams to use, triggering a probe by Naval Criminal Investigative Service.

Agents soon learned about his extramarital affairs and other inappropriate relationships. The women included a superior officer identified only as “1stLt SS,” a pair of unnamed sergeants who worked for Williams and a female friend from his high school days who accompanied him to Yuma on the trip.

Williams told the woman to lie and say that she was his cousin, if anyone asked, according to his court-martial documents. The military outlaws adulterous relationships and fraternization between the ranks and will prosecute them if they threaten to destroy unit cohesion, are tied to other crimes or bring the service into disrepute.

“The appellant repeatedly acted with flagrant disregard of the consequences upon his unit by having regular adulterous intercourse with a superior officer in his office, suggesting a subordinate sergeant hold the camera to film his sexual escapades, having sex with a different subordinate, stealing from the government, and telling a civilian mistress to lie about the nature of their relationship to anyone who asked,” the chief judge wrote.

“Significantly, when word of the adultery and fraternization spread to other active-duty Marines, (Williams) feigned offense at the rumors, continued his behavior and blatantly lied to an NCIS agents just hours after having sexual relations with the superior officer, stating six times, ‘I don’t deal with military’ when referring to his sexual exploits,” she wrote.

The superior officer received nonjudicial punishment for conduct unbecoming an officer, an administrative sanction that falls far below a federal criminal conviction. She resigned her commission and exited the service, according to Marine spokeswoman Capt. Morgan M. Frazer.

“This type of behavior and mindset is not tolerated within 3rd Marine Aircraft Wing and is not consistent with our core values of honor, courage and commitment that are demonstrated by the vast majority of Marines on a daily basis,” Frazer said by email.

Williams told The San Diego Union-Tribune that two senior commissioned officers in the command were allowed to quietly retire after they were caught in unlawful romances. He insisted that the lieutenant in his case testified against him only after she reached a plea deal that gave her a much lighter penalty for the same conduct.

“We are confident that the command conducted a thorough investigation into the matter and took appropriate administrative or disciplinary action for all persons involved,” Frazer said, adding the wing “regularly assesses command climate and conducts annual training to ensure Marines understand and comply with Marine Corps policies and procedures.”

Williams hopes that new judges will reward him for his two deployments each to Iraq and Afghanistan, three meritorious promotions, two Navy and Marine Corps Commendation Medals and five Navy Achievement Medals for superior service and let him retire at a lower rank. He remained married and said he counted on a military pension to help support four children, he said.

The clerk of court for the United States Court of Appeals for the Armed Forces said that paperwork requesting a review of Williams’ case had yet to be submitted.