"I'll tell you what, judge, I'm not going to sanitize this for their concerns." 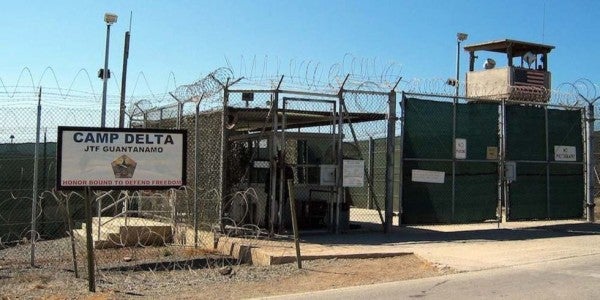 “I know torture's a dirty word,” defense attorney Walter Ruiz told the tribunal. “I'll tell you what, judge, I'm not going to sanitize this for their concerns.”

Ruiz repeatedly used the word “torture” — and gave vivid descriptions of what had been done to his client, Mustafa Hawsawi, in secret CIA-run black-site prisons — something that would have been unthinkable for most of the eight years the case has been ongoing.

“Did it matter in your assessment that Mr. Al Hawsawi had been tortured in this many ways? Did it matter to you?” he asked.

Torture has been the overriding issue in these hearings since this version of them began in 2012, but for most of that time it was an issue that could not be discussed openly. This week's testimony from Mitchell brought the issue front and center. The hearing included an extended debate between Ruiz and the military judge, Air Force Col. W. Shane Cohen, on Ruiz's tactics. Ruiz was adamant he didn't care if the witness and the prosecution objected to his descriptions.

Cohen has relaxed restrictions on what can be said in his courtroom since taking over the 9/11 case seven months ago. He seemed to explain his reasoning Friday.

Cohen said he didn't care what anybody called the interrogation techniques. What mattered ultimately, he said, was what he and he alone decided.

“The opinion of the Department of Justice, the attorney general, or even the president of the United States is not binding on me,” he said.

In short, if Ruiz wanted to call it torture, he could. And he did. Repeatedly.

This week of testimony has been devoted to a defense motion to exclude from the trial — scheduled to start in January 2021 — confessions the five defendants made to FBI agents in 2007. Among the key issues: whether the defendants had been tortured, and whether the FBI was involved in the CIA's interrogation program.

Mohammed is charged with masterminding the 9/11 attacks. The other defendants — his nephew Ammar Baluchi; Ramzi bin Shibh, a roommate of a 9/11 hijacker; Walid bin Attash, a longtime operative of Al Qaeda; and Hawsawi, an Al Qaeda bookkeeper who was captured with Mohammed — are charged with assisting him.

A prior judge in the case had thrown the confessions out, only to retire and have a subsequent judge reinstate them. When Cohen took over the case last year, the defense made a motion to once again exclude them.

The prosecution has said the confessions are crucial to its case; it is unclear how it would proceed without them.

Mitchell designed, oversaw and frequently employed the CIA-approved regime of harsh interrogation techniques. He is testifying for the first time in criminal court about the program. He insists the techniques, which included extended sleep deprivation, waterboarding, slapping and slamming prisoners into walls, did not constitute torture and disagreed repeatedly with Ruiz's characterization of them as such. He has defiantly defended the harsh practices, saying they were necessary to defend America.

Mitchell has testified all day for four days. He appeared tired and irritable Friday.

Mitchell insists the techniques — one of which, waterboarding, he described as horrifying — did not cause permanent damage to the five defendants, all of whom were subjected to various combinations of the techniques. “The reason I don't use the word torture is because that's a determination that is made by a judge in court,” Mitchell said.

Ruiz asked if he also avoided the word torture because of fear of potential criminal liability. After Mitchell said no, Ruiz played a video of Mitchell doing a podcast to publicize his book, “Enhanced Interrogation: Inside the Minds and Motives of the Islamic Terrorists Trying To Destroy America,” in 2018. In the podcast, Mitchell rebutted the host's use of the word: “We never use the word torture because torture's a crime,” he said.

McDermott is a special correspondent.