A military court denied the appeal of a former Parris Island drill instructor sentenced to 10 years in prison for abusing three Muslim recruits, including Raheel Siddiqui of Taylor, who died during boot camp in 2016 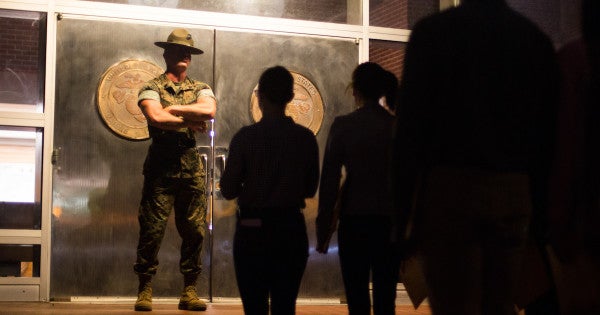 A military court denied the appeal of a former Parris Island drill instructor sentenced to 10 years in prison for abusing three Muslim recruits, including Raheel Siddiqui of Taylor, who died during boot camp in 2016.

A three-judge panel of the U.S. Navy-Marine Corps Court of Criminal Appeals reviewed the 2017 court-martial of Gunnery Sgt. Joseph A. Felix Jr. and affirmed his conviction and sentence.

In a
decision issued last week, the court called Felix a “bully” whose “misconduct impacted an entire generation of Marines.”

“The appellant was placed in a position of trust, charged with turning young men into Marines. He was one of their first authority figures — their first example of what a Marine was supposed to be,” Senior Judge and Capt. Frank D. Hutchison wrote for the court.

“Instead of providing a positive example and conducting meaningful training, he taught his recruits, by his example, that rule-breaking was commonplace and that violence against fellow Marines was not only acceptable, but required to instill discipline. Not only did he fail to correct or report his subordinates' bad behavior, he encouraged it and participated in worse and more pervasive behavior.”

A military jury at Camp Lejeune, North Carolina, convicted Felix in November 2017 on three counts of recruit “maltreatment” — abusive, unwarranted or unjustified treatment or that which causes physical or mental suffering.

They also found Felix guilty of eight of nine counts of violating general orders by making physical contact with recruits, including striking and choking them; ordering excessive, unauthorized “incentive training” or punitive exercises.

Recruits had testified that Felix forced them to drink chocolate milk until they emptied the bladder dispenser, and then put them through physical exercises to make them vomit — “an act that had no training purpose and served only to apparently amuse the appellant at the recruits' expense,” Hutchinson wrote.

Felix was also convicted on one count of making false official statements and one count of drunk and disorderly conduct.

The government had alleged that Felix zeroed in on three Muslim recruits in three different platoons over 12 months because of their faith, referring to each as “terrorist” or “ISIS” and stuffing two of them into an industrial Speed Queen dryer in July 2015, among other alleged acts.

On appeal, Felix's attorneys argued that the military judge below had erred in part by allowing testimony about prior acts and “uncharged misconduct” to demonstrate Felix's alleged propensity to target Muslims and abuse recruits.

The appeals court disagreed, saying the evidence, including the fact the recruits were Muslim, was relevant to the case.

Felix's attorneys also claimed that his trial counsel was ineffective and that his sentence was inappropriately and disproportionately severe considering the punishments issued to his fellow drill instructors accused of maltreatment.

The appeals court again rejected the arguments, saying Felix's misconduct was “more severe and pervasive than that of his fellow drill instructors.”

“While we recognize the mitigation evidence presented by the appellant, including his many military accomplishments and the tragic consequences his conviction has on his family, we are convinced the appellant received the punishment he deserved,” Hutchison wrote.

Felix's court-martial was the first public prosecution by the Marines involving the case of Siddiqui, who was in his first week of training when he died following an altercation with Felix on March 18, 2016.

Siddiqui family attorney Shiraz Khan said Thursday that it's important for all those “responsible and/or involved (directly or indirectly) in the death of Raheel Siddiqui to be held accountable for what they've done.”

“Over the past year, our office, with the help of many in South Carolina, has conducted our own discovery into Raheel Siddiqui's death, his transport to and from medical facilities and the alleged treatment he received,” Khan said in a statement.

“The truth has a way of unveiling itself at the right time, and we are prepared to litigate accordingly.”

Felix was not charged in Siddiqui's death, and the manner and details of his passing were not discussed at the court-martial, much to his family's disappointment.

On the day he died, Siddiqui had requested medical treatment for a sore throat, but Felix ordered him to run several sprints across the squad bay until Siddiqui collapsed. Felix slapped Siddiqui while he was down — to revive him, according to Felix's attorneys — then Siddiqui got up and ran out a door to the stairwell.

Siddiqui went over the stairwell railing, and his foot caught. He fell nearly 40 feet to the concrete below and later died, according to a report by Marine investigators.

The jury found Felix maltreated Siddiqui by ordering him to run repeatedly back and forth across the squad bay and striking him in the face.

In addition to prison time, Felix received a dishonorable discharge, forfeiture of his salary and a reduction in rank to E1, or private. He also was to lose his military benefits and housing allowances.

Siddiqui's death was ruled a suicide, but his family has maintained their son did not kill himself.

Sen. Gary Peters, D-Bloomfield Township, said the family “has experienced pain that no family should ever be forced to endure.”

“Discrimination is simply unacceptable — especially against volunteers like Raheel who answered the call to defend our country in uniform,” Peters said.

“The Siddiqui family deserves justice, and those who are responsible for the abuse or mistreatment of Raheel must be held accountable. It's important that the Marine Corps is addressing this with the seriousness it deserves, because a tragedy like what happened can simply never happen again.”

Siddiqui's parents previously sued the Marine Corps for $100 million, claiming their son was assaulted, hazed and discriminated against because of his Islamic faith, and that military officials were negligent in failing to protect him.

The family appealed after a federal judge last year dismissed the case, saying claims related to injuries to active-duty military personnel belong in military and not civil courts. That appeal is pending at the U.S. Court of Appeals for the 6th Circuit.