So you’re stuck in the field, it’s raining — because why the hell wouldn’t it be? — and you’re famished. … Continued 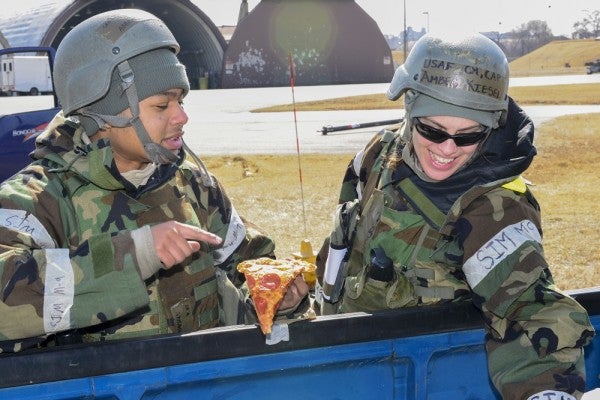 So you’re stuck in the field, it’s raining — because why the hell wouldn’t it be? — and you’re famished. So you sit down on an overturned Kevlar and reach into your bag for your prized possession: the long-promised pizza MRE. There’s just one problem: It’s completely brown and looks like shit on a slice of cardboard.

And that’s why you won’t be getting a pizza MRE anytime soon, Jeremy Whitsitt, the deputy director of the combat feeding directorate at Natick explained in an interview with Defense News.

All MREs are required to last at least three years while being stored at 80 degrees or below. To test this out, the MREs are placed in a 100-degree box for six months, in order to simulate the three-year requirement.

The pizza MRE flunked that test, turning brown. The discoloration represents more of a quality concern than a safety one, Whitsitt told Defense News, adding that troops could eat the brown pizza, but probably wouldn't want to.

Though disappointing, hiccups like this are to be expected when you’re trying something as brazen and bold as long-lasting pizza in a bag. The pizza MRE was expected to hit shelves in 2018, with both pepperoni and cheese being shipped out to eagerly waiting troops in training and overseas.

The pizza made in Natick’s labs turns out fine, reports Defense News. The issue occurs when it’s mass-produced, and so the timeline has temporarily been scrapped until they figure out how to make all the pizzas look palatable.

Making an immortal cheese pizza, it turns out, is more science than art, with careful consideration paid to each chemical and ingredient added, according to a 2014 Vice article on the MRE. Supermarket cheese contains too much moisture, so it needs to be cut with a shelf-stable cheese product. Tomato sauce leaches into the bread over time, so scientists created a tomato-flavored carbohydrate- and starch-based “barrier technology” that's cut to a square to fit over the pizza MRE, and sandwiched between the two pizza layers.

The MRE has been in the works since 2012, and it’s so desperately sought after that it’s been referred to as the “holy grail.” Which makes sense, given that a truly edible three-year-old pizza would be akin to a biblical miracle.