Military commanders are under pressure to quickly identify and contain any appearance of the virus on bases around the world. 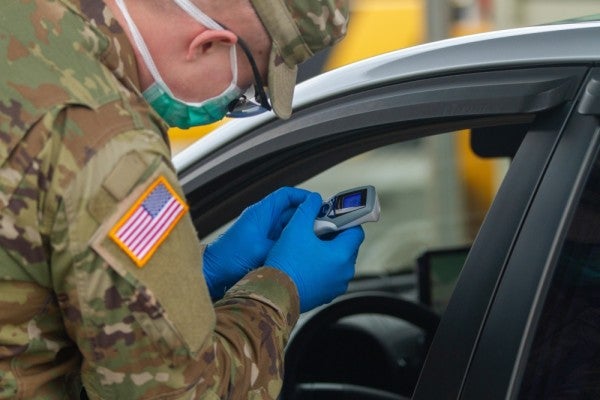 WASHINGTON (Reuters) – U.S. military laboratories have started receiving their own testing kits to determine whether American troops have the new coronavirus, officials said, after relying on outside testing in the roughly two months since China reported the first cases.

But capacity is still limited, as is the distribution of the test kits, they say.

U.S. military commanders, responsible for the more than a million active duty forces at home and abroad, are under pressure to quickly identify and contain any appearance of the virus on bases around the world, where troops often live and work in close quarters.

As of Monday, at least 34 U.S. Defense Department personnel, dependents and beneficiaries had been evaluated worldwide for the coronavirus, a U.S. official told Reuters. Those tests have resulted in a handful of confirmed cases including at least one U.S. servicemember, officials say.

But until at least late last week, all of the testing was carried out exclusively by the U.S. Centers for Disease Control and Prevention (CDC), although U.S. commanders could potentially also turn to local authorities in places like South Korea and Japan.

The first official told Reuters that 12 U.S. military laboratories now have CDC test kits, while two others are authorized to receive them.

Still, that is only a fraction of the U.S. military's laboratories, some of which are also working a potential vaccine and medicine to help the body fight the virus. The official noted that not all of the other laboratories have the equipment or trained staff to carry out the tests.

A field-test kit that can rapidly diagnose the new coronavirus could still be far off and U.S. military officials say they are working on increasing capacity at their laboratories to carry out a higher volume of testing.

Army General Mark Milley, chairman of the Joint Chiefs of Staff, has played down on the impact so far on the military, noting the generally young, healthy demographic.

Globally, there have been over 96,500 cases and more than 3,300 deaths, according to a Reuters tally.

Dr. Amesh Adalja, an infectious disease specialist and senior scholar at the John Hopkins Bloomberg School of Public Health, agreed the military was more likely to deal better with the illness than the general population. But mild cases could still emerge.

“There's a spectrum of illness and there are going to be individuals that have mild cases from all age cohorts,” Adalja said.

“We don't quite know who is most likely to get symptoms, and who isn't.”

The Pentagon did not provide an updated tally of how many people have been tested for the virus. U.S. Defense Secretary Mark Esper said on Thursday he hoped to keep the Pentagon itself, where 22,000 people work, operating even in the event of an outbreak.

The U.S. military in South Korea announced on Thursday that two more U.S. military dependents had become infected there, bringing the total confirmed to have the new coronavirus to six people — including a U.S. servicemember.

Of the 12 labs with kits, only two of them are overseas: the U.S. military's Landstuhl Regional Medical Center in Germany (LRMC) and the Brian Allgood Army Community Hospital in South Korea. LRMC received two kits, while Brian Allgood got one, the first official said.

Each kit is estimated to be able to test about 400 patients, assuming two samples per patient.