A military working dog was killed in a fierce firefight in Afghanistan last week, and his actions in his final moments saved the lives of several U.S. soldiers 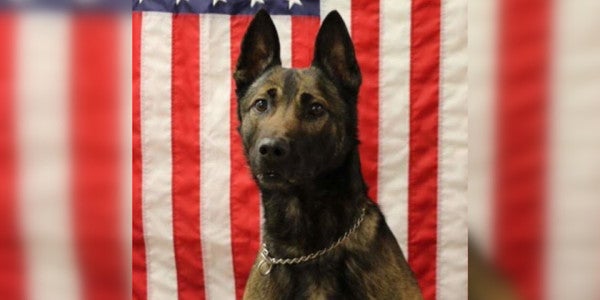 A military working dog was killed in a fierce firefight in Afghanistan last week, and his actions in his final moments saved the lives of several U.S. soldiers.

Maiko, a multi-purpose canine (MPC) assigned to Army 75th Ranger Regiment's 2nd Battalion, was killed during a raid on Al Qaeda militants in Nimruz Province. Sgt. Leandro Jasso, who was assigned to the same unit, was also killed during this engagement.

“Maiko was killed in action while leading Rangers into a breach of a targeted compound” on Nov. 24, an unofficial biography leaked online reads. “Maiko's presence and actions inside the building directly caused the enemy to engage him, giving away his position and resulting in the assault force eliminating the threat without injury or loss of life.”

“The actions of Maiko directly saved the life of his handler [Staff Sgt.] Jobe and other Rangers,” the document said.

The accuracy of the biography, which first appeared on social media, was confirmed to Stars and Stripes by a spokesperson for the 75th Ranger Regiment at Fort Benning in Georgia.

Along with SGT Jasso, MPC Maiko was killed in action on 24 November 2018 in Afghanistan. His actions saved the life of his handler and other Rangers. Thank you for your service and sacrifice! pic.twitter.com/gVquyLsHFe

The dog was born in Holland in 2011 and brought to the U.S. when he was 15 months old. Maiko was seven years old and on his sixth deployment to Afghanistan at the time of his death. He is said to have participated in over 50 Ranger-led raids involving IED detection, building clearance, and combatant apprehension.

“Rest assured Maiko never backed down from a fight,” his biography explained, adding that this dog “embodied what it means to be a Ranger … The loss of Maiko is devastating to all that knew and worked with him.”

According to a Bloomberg News report from last summer, there are roughly 1,600 military working dogs serving in the field or aiding veterans. These dogs go through extensive training, and a full-trained military dog is worth around the same amount as a small missile.

Maiko was purchased by the Regimental Dog Program in 2012 and put through the Regimental Basic/Advanced Handler's Course before he was ultimately assigned to the 75th Ranger Regiment's 2nd Battalion. He was handled by five different handlers during his career.