A joint task force was set up to marshal Hawaii National Guard and active-duty military relief capabilities before now-Tropical Storm... 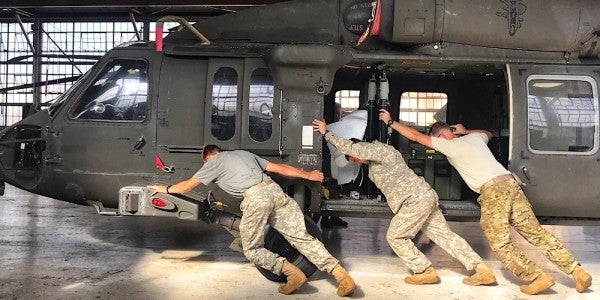 A joint task force was set up to marshal Hawaii National Guard and active-duty military relief capabilities before now-Tropical Storm Lane started to sputter, though still hanging onto 70 mph winds as of Friday evening.

In the face of the storm’s uncertainty, Secretary of Defense James Mattis and Gov. David Ige approved the formation of Joint Task Force 5-0 to establish a “clear chain of command and maintain operational unity” between state and federal relief efforts, with Brig. Gen. Kenneth Hara, the state’s deputy adjutant general, appointed as commander.

“We usually can handle natural disasters with our full-time joint staff — Army and Air Guard — and we can handle it if a hurricane clips one island, but if (Lane) hits multiple islands or it hits Oahu hard, then we stand up this larger force,” National Guard spokesman Maj. Jeff Hickman said early Friday.

Nearly 280 Hawaii Guard members are now on duty — including 120 still on Hawaii island for the Kilauea lava flow — but that number could rise should rain or wind from Lane cause widespread damage, Hickman said.

Up to 3,000 Hawaii Army and Air Guard members are still available to help with storm relief, he said.

Lane is unusual in that it threatened multiple islands and has wide-reaching rain bands, officials said.

“One of the advantages we have in Hawaii is all the components are in one state, one location,” Hara said Friday. “All of the headquarters are within almost 20 minutes of each other. … You don’t find that anywhere else in the world. So we work often together, train together.”

Col. Tony Crawford was appointed as a JTF 5-0 deputy commander and has 10 to 15 staff, Hickman said. The active-duty soldier said he’s been on relief missions before, and “I’ve seen how impactful this can be. … It is very rewarding to help (a community).”

“We live here as well. The Hawaii family is our ohana as well. Our families are affected, our pets are affected. What we’ve seen a lot of, especially in this response, is all the (military) components … leaning very far forward” to offer assistance, he said.

The active-duty side has “so many engineering units, and they have more personnel,” Hickman said. “They bring a lot to the table.”

Master Sgt. Chad Sagaysay, a Hawaii National Guard soldier, said he was working on Kauai helping with flood relief for 18 days, had a four-day break, then went to the Big Island for the lava effort for nearly three weeks.

“I came back and here I am now,” he said of his latest assignment working in logistics with the task force.

A “warning order” was placed for big Marine Corps CH-53E Super Stallion helicopters from Kaneohe Bay to be on standby, Hickman said.

“Right now nobody’s stranded,” he said. “We don’t need to move mass numbers of people. But (it was a possible) scenario, so that’s there.”

Lanai was a concern

One of the issues the task force was already looking into was if Lanai got hit.

“We don’t have an armory or personnel on Lanai, so they are figuring out, ‘OK, so we’re going to have to be in tents. Where do we go?’ So they are researching that. How do we get them there? How many days of food do we send?” Hickman said.

Small National Guard task forces are based on most of the islands that can facilitate requests.

“Right now on Maui they asked for military trucks. So we’re working with Maui County to get five trucks and 20 soldiers and airmen to assist with that mission,” Hickman said, adding that the high-ground-clearance vehicles would be handy with flooding.

The additional National Guard duty comes on top of recent Kauai flood and ongoing Big Island lava relief, and with about 1,000 Guard troops deploying this year and early next year to the Middle East and Europe.

About 80 soldiers will have a deployment ceremony Sunday ahead of assignment to the Sinai mission in Egypt.

A separate Joint Task Force 5-0 was set up for the early days of lava relief but has since been disbanded.

“The good thing is that we’re getting good at it,” Hickman said. “Now we’re an experienced emergency management response team.”