Defense Secretary Mark Esper expressed confidence on Sunday in the U.S. military justice system's ability to hold troops to account, two days after President Donald Trump pardoned two Army officers accused of war crimes in Afghanistan and restored the rank of a Navy SEAL platoon commander who was demoted for actions in Iraq 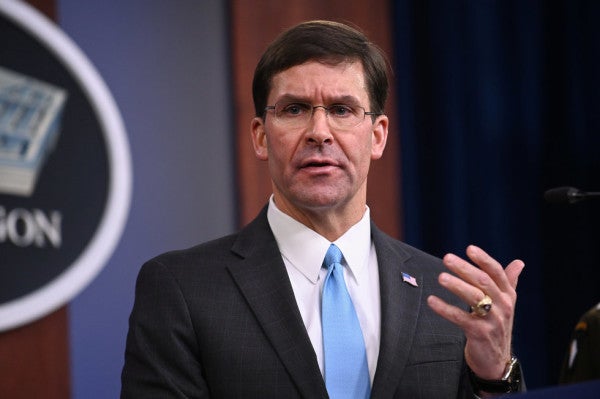 Trump also restored the rank of a Navy SEAL platoon commander who was demoted for actions in Iraq.

Asked how he would reassure countries such as Afghanistan and Iraq in the wake of the pardons, Esper said: “We have a very effective military justice system.”

“I have great faith in the military justice system,” Esper told reporters during a trip to Bangkok, in his first remarks about the issue since Trump issued the pardons.

Critics have said Trump's pardons would undermine military justice and send a message that battlefield atrocities would be tolerated.

In 2013, prosecutors accused Lorance of illegally ordering the fatal shootings of two men on motorcycles while on patrol in Afghanistan's Kandahar province. He was found guilty of two counts of murder.

Last year, Golsteyn, an Army Green Beret, was charged with murdering an Afghan man during a 2010 deployment to Afghanistan.

Gallagher, a decorated SEAL team platoon leader, was accused of committing various war crimes while deployed in Iraq in 2017.

In July, a military jury acquitted him of murdering a captured Islamic State fighter by stabbing the wounded prisoner in the neck, but it convicted him of illegally posing with the detainee's corpse. That had led to his rank being reduced.

Esper said U.S. forces “are trained from day one about the laws of armed conflict and how to conduct themselves during wartime” and stressed they will behave accordingly.

“If they don't, then the United States military will take action in accordance (with the Uniform Code of Military Justice) to make sure that they are held accountable,” he said.