What happens on social matters, shaping everything from the outcomes of battles and even the health of nations 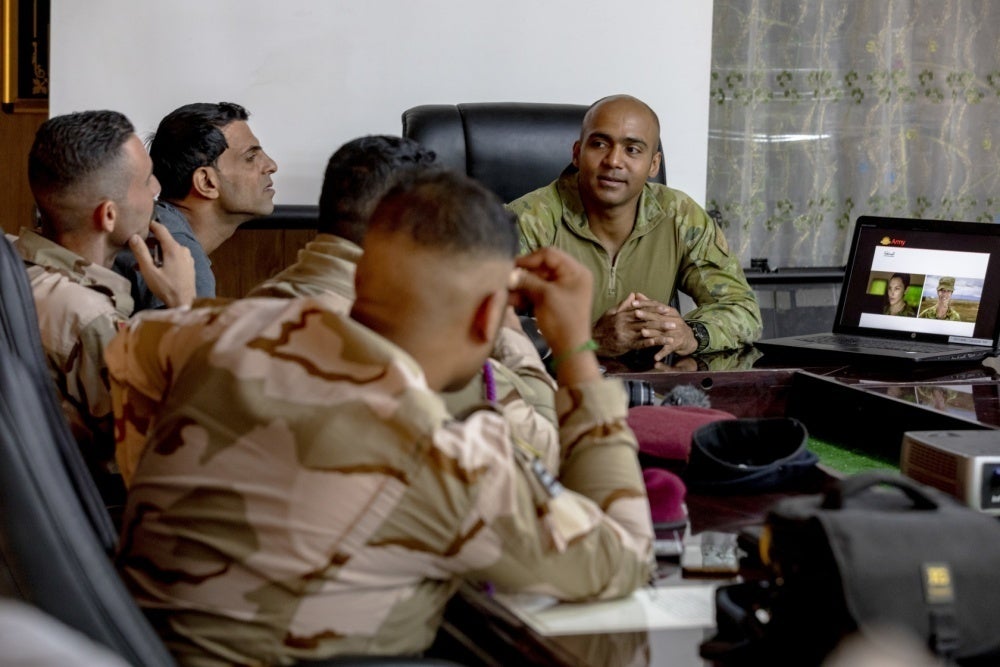 Fifty years ago this month, a small Pentagon project designed to allow scientists to share time on the early versions of computers changed the world. The first links of what originally called “ARPANET” moved us all into the Internet Age, changing everything from business, dating, to daily reads.

Along the way, though, the Internet also became a new kind of battlefield. Nations, organizations, and even individuals are now hacking not just the networks themselves (a.k.a. “cyberwar,” where the object is to breach a network), but also increasingly the people on them (what can be thought of as “likewar,” where the object is to drive something viral through a mix of likes, shares, and sometimes lies).

Some in the old guard argue social media is irrelevant to the real world and should be avoided completely by military members, especially given operational security concerns. Others argue the opposite and treat it like free-fire zone with the accompanying risks. There is a middle ground, however.

Like any other good Internet meme that builds off a pre-existing concept, below are the seven suggested “Pillars” of personal use of social media by the military.

1) Social Media Still Matters, Even If You Aren't There

Don't take all the problems, risks, and sometimes silliness of social media as a reason not to be there. What happens on social matters, shaping everything from individual behavior to the outcomes of battles (the 2014 Battle of Mosul as the first example) and even the health of nations, both literally (the return of childhood diseases is linked to anti-vaxxer conspiracy theories) and figuratively (over 30 democratic nations have seen their elections attacked by foreign government disinformation campaigns).

Like any vacuum, social media abhors a vacuum. If you are not there, someone else will fill the void. Indeed, they might even fill it with a fake account in your name, as has happened to pretty much every senior military leader.

2) The Network Is Where What You Need Is

Even if you never post something on social media, a world of open-source intelligence lies at your fingertips. We are in a world where there are not just literally billions of sensors gathering information, but each person online can share that information in real-time.

The online world is now a, if not the, essential place to gather info on your operating environment. Whether it is learning the concerns of those you lead to gaining insight into what is going on in a region that you might deploy into, social media is now a crucial repository of real-time information.

3) Your Profession Is Changing Online

Social media is the new war college seminar room, military journal, and officers' club barroom rolled into one. Mixed in with jokes and snark, some of the most important issues of the military profession are being hashed out online, often under the hashtag #miltwitter.

Whether the issue is doctrine, personnel policy, or ethics, the online networks are where much of the latest news and commentary are being shared and debated.

If you want to communicate, social media is the place you now have to be. Its whole appeal and value is that it is a space for both one-on-one interaction and mass broadcast. And this is even more so for the generations that have grown up in a world shaped by it. Earlier this year, I was at a military conference where a general gave out his Twitter and Instagram handles to the audience of young officers.

It was not an act of self-promotion, but leadership.

Social media is where those you lead, their families, partners in industry, other agencies, and allied militaries, as well as the wider public, are now. Indeed, it may be even more influential than other forms of media, as more than 90% of professional journalists, be they newspaper, radio, or TV reporters, use what's happening on social media to determine what stories to cover, who to interview, and even whether to double down and cover the same story again.

Social media is not a space you can just have your staff push out an official announcement every few months and expect success. A savvy online world sees though that, making it almost worse than not being there in the first place. In social media, authenticity is the coin of the realm, supported by scale.

Engaging and interacting consistently will help you understand the issues, debates, and thought leaders, as well as filter what is valuable or not. It also builds up a network and credibility that you might need at some point.

Being there doesn't mean being stupid about it. There are formal rules and laws that members of the military have to follow as part of a taxpayer-paid, unique profession that is responsible for national security. Carry yourself with all the trust and responsibility that comes with that role. There are also rules of behavior in the online world that may not be written in the Constitution or UCMJ, but they are just as important.

This is not just about giving away obvious matters of operational security or personal information that you use in your passwords. It is also how you act. Social media already has enough fools and trolls, it doesn't need the military reinforcing their numbers.

Your every post leaves a trail behind you that is full of far more information than most people realize. Online posts reveal not just what you are doing or saying, but also your psychological profile and influence points. Be aware that adversaries will be constantly mining your posts and those around you for insight into you.

We should expect looming big data versions of the infamous scene from the movie Patton, just now with the line changed to “Rommel you magnificent bastard, I read your Tweet!” An enemy might be able to project likely actions based on everything from psychological tendencies to which historic leaders they are apt to mimic, drawn from their own book reading lists. Limit the nuance of what you share, and follow the Russian strategy of mixing in a few false steers. Yet perhaps more pernicious to the future of the U.S. military is how this trail will shape future careers and broader civil military relations.

Far too many officers openly display their partisanship and even disrespect for the government they serve online.

In a survey, over a third of U.S. military officers self-reported sharing “insulting, rude, or disdainful comments on social media directed against elected leaders, including the president.” They well may deserve it, perhaps now more than ever, but this behavior bodes dangerous trends for the future of both internal culture and civil-military relations, with a West Point professor describing it as “toxic to the officer corps.”

It may not feel right nor fair, but such information is going to be mined for use in future evaluations and even promotions. Just as photos from a holiday party can torpedo an otherwise distinguished career, it is easy to see how a White House official, congressional staffer, or even fellow officer is going to hold up an advancement one day based on an old post that shows the officer is “…not on our team.” Keep your partisanship to the voting booth. The term “duty of silence” has been controversially argued in how it applies to those that are retired, but there is no controversy that it clearly applies to those on active duty.

In the end, how military officers should handle social media is like any other realm: by understanding its rewards, rules, and risks.

You can avoid this space, but you will be missing out on opportunities to understand and engage in a way that aids your career and those you serve. Yet, entering it comes with obligations and perils, which, like everything online, are magnified if you don't operate with good sense. To be a professional means to be part of a career that follows a code. Act online like the smart professional that you are, and you'll be fine.

P.W. Singer is a Strategist at New America and the co-author of LikeWar: The Weaponization of Social Media, out in paperback this month.