Have The Skies Become Too Dangerous For Military Medevac Missions?

Are the skies becoming too dangerous for military medevac missions to fly? The advent of sophisticated anti-aircraft weapons has caused... 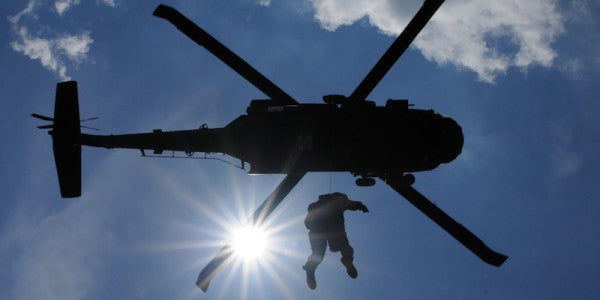 Are the skies becoming too dangerous for military medevac missions to fly?

The advent of sophisticated anti-aircraft weapons has caused one researcher to question whether medevac as we know it is dead.

From the Korean and Vietnam Wars, to Iraq and Afghanistan, the medevac helicopter swooping down to save the wounded has become a cultural icon. In World War II, 30 percent of wounded soldiers died: that number declined to 24 percent in Vietnam, and 10 percent in Iraq and Afghanistan. The biggest reason was the availability of rapid medical evacuation.

“Dust off” crews in those conflicts faced very real dangers from ground fire such as machine guns, and many paid the ultimate price. But at least the U.S. controlled the skies they flew in.

Today's medevacs can't count on that anymore. Potential adversaries such as Russia and China can field a deadly arsenal of anti-access/area denial, or A2AD technologies, such as sophisticated anti-aircraft missiles, advanced jet fighters, drones, jammers, and cyberweapons. If even stealthy F-35 fighters can't operate safely, then what about a Blackhawk helicopter?

Related: Medevac Obstacles Mean That The Deadly Ambush In Niger Won’t Be The Last »

“These capabilities can threaten rapid access to higher-echelon medical support within and beyond the theater of operations,” writes RAND Corp. researcher Martha Kepe, in an article for West Point's Modern War Institute.

As even NATO had admitted , the Western powers — including the U.S. — have become spoiled. Operating in places like Afghanistan, Iraq and Libya, where there was no sophisticated air defense, medevac missions were relatively safe — or safe at least compared to what they would face in a conflict with Russia or China.

Today's threats include “missile systems (such as surface-to-air missiles, anti-ship missiles, and land-attack cruise and ballistic missiles), manned and unmanned aircraft, mines, electronic warfare, and cyber capabilities — all enabled by a network of intelligence, surveillance, target acquisition, and reconnaissance assets,” Kepe notes. “In particular, Russia’s air defense systems and aircraft are capable of threatening large swathes of the airspace over NATO territory, complicating not only ground operations but also air-to-air and air-to-ground missions.”

It's not just Russia and China that threaten medevac. Ballistic missiles from nations such as Iran can also disrupt medical transport by targeting facilities such as airfields. All of these threats would “most likely impact the provision of medical support to NATO troops and those of partner nations, and erode the ability to minimize the rate of battlefield injuries and deaths from wounds,” Kepe says.

Beyond medical evacuation of casualties, A2AD systems could impede the transport of medical supplies (especially perishables such as blood plasma) to forward medical facilities, the ability to redeploy medical units, as well as ferrying badly wounded patients to distant medical centers that offer better treatment.

Related: One Of US Military Planners’ Greatest Fears In A War With North Korea: Medevac Denial »

Kepe offers a few suggestions, such as pre-positioning medical supplies before a conflict, giving soldiers more first aid training, and developing ruggedized medical equipment that can be at the front. “Mobile, modular, and dispersed medical facilities with low-signature footprints may be used to avoid detection and increase mobility,” she adds.

Nonetheless, it appears that medical evacuation is becoming a much more hazardous proposition. Yet the modern Western way of war, especially in today's small wars, assumes the availability of medevac. In fact, the American, European and Israeli publics expect their wounded soldiers to receive lifesaving care. If medevac is no longer viable, will this dampen the willingness of these nations to go to war?