The Army, Navy and Air Force are finalizing plans to eliminate over the next few years more than 17,000 uniformed medical billets — physicians, dentists, nurses, technicians, medics and support personnel 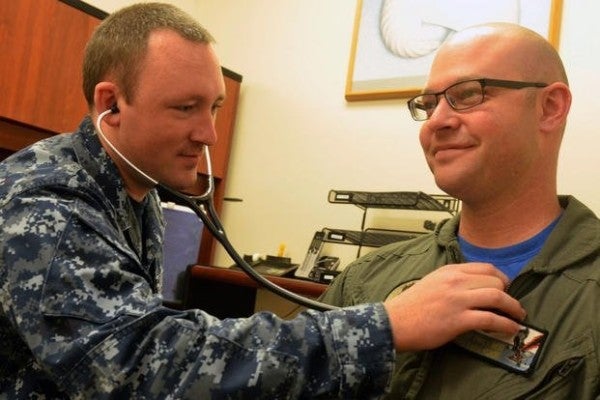 Editor's Note: This article by Tom Philpott originally appeared onMilitary.com, a leading source of news for the military and veteran community.

The Army, Navy and Air Force are finalizing plans to eliminate over the next few years more than 17,000 uniformed medical billets — physicians, dentists, nurses, technicians, medics and support personnel.

The reduction will allow those billets to be repurposed as war fighters or combat-support skills to increase lethality and size of operational units. Another goal is to deepen the workload of remaining medical billets at base hospitals and clinics to strengthen medical skills and also to improve quality of care for beneficiaries, defense officials explained.

One senior service official shared the latest figures he has seen showing the uniformed Army medical staff falling by almost 7,300, the Navy by almost 5,300 and the Air Force by just over 5,300.

Spread across a combined medical force of 130,000, both active-duty and reserve, the planned cuts would lower uniformed medical strength by roughly 13 percent, a drop steep enough to alarm some health care leaders as well as advocates for military health care beneficiaries.

“If the goal is to tear down the military health system, this would be a reasonable way to do it,” warned one service health official who asked not to be identified.

Given the numbers involved, said retired Navy Capt. Kathryn M. Beasley, director of government relations for health issues at the Military Officers Association of America, the staff cuts eyed are worrisome for patient access, particularly to physicians young families rely on such as pediatricians and obstetricians.

“We need to see the final numbers to understand the impact,” she said.

But senior defense officials, who say they collaborated closely with the services on overall staff reduction plans, contend the current force is larger than needed to meet today's operational missions and is overloaded with skill sets not useful for deployment and delivering of battlefield care.

Also, they contend, the oversized staffs harm quality of care because, at too many base hospitals and clinics, these care providers don't treat enough patients to keep skills sharp.

“So, part of this drill is to realign our people to the appropriate level of workload so that their skills, both for battlefield care and for beneficiary care, improve,” said one Defense Department official.

Top defense officials agreed to discuss reasons behind the planned staff cuts for the military health care system, but declined to confirm any numbers for medical slots targeted, which some service officials did share, because no figures will be firm until the fiscal 2020 defense budget request is approved by the White House and sent to Congress in February.

If Congress approves the cuts, to be presented billet by billet, the reductions would begin to take effect in fiscal 2021.

Preliminary Navy documents show uniformed staff at Walter Reed National Military Medical Center falling by 534 personnel, with, for example, 82 taken from director of clinical support, including 28 of 39 corpsmen, 5 of 12 radiological diagnosticians, 4 of 7 pharmacists, 8 of 19 pharmacy techs, and 9 of 45 medical lab technicians.

Defense officials described a year-long collaboration between service medical departments, the Joint Chiefs, the Defense Health Agency and CAPE, the Cost Analysis and Program Evaluation Office of the Secretary of Defense. The force cuts are just one part of an enormous transformation occurring across military medicine.

Control of all medical facilities is being transferred to the Defense Health Agency (DHA), where functions of the three separate service medical departments already are being consolidated to streamline health care operations, slash support costs and standardize practices and procedures, from scheduling appointments to reporting on provider errors. Meanwhile, the military health system is adopting MHS Genesis, a new electronic health record system.

Just as Congress directed these changes, it told the secretary of defense in its fiscal 2017 National Defense Department Authorization Act to collaborate with service branches on defining medical and dental personnel requirements to ensure operational readiness, and to convert military medical positions to civilian positions if deemed unnecessary to meet operational readiness needs.

The medical force reduction effort, however, isn't being funded for a mass conversion of military billets to civilian medical positions. Instead, the emphasis is on providing more effective and efficient care, on battlefields and through military treatment facilities to troops, families and retirees, using smaller staffs that are sized to gain more experience and be better trained for military operations.

To understand what's about to happen, said a senior official familiar with the staff cut plans, it is helpful to grasp a notion that sounds counterintuitive: “Reducing the number of people providing a particular service within a facility does not mean a degradation of care within that facility.”

A “truism in the medical arena,” he added, “is that the more times a provider performs a procedure, the better that provider is at performing that procedure.”

If a military hospital now staffed with five orthopedic surgeons performs 10 knee replacements a month, that's only two operations per surgeon. If staff is cut to one surgeon able to still comfortably perform 10 procedures a month, both quality of patient care and the readiness of that surgeon for war will improve.

That argument for a careful reduction of staff isn't persuasive to some career medical personnel.

One said he is worried that staff cuts this deep could leave hospitals short of personnel to deploy or to receive patients if old wars escalate or new ones break out in Korea, Eastern Europe or the South China Sea. He also worries about finding civilian replacements when needed, noting chronic staff shortages within the Department of Veterans Affairs medical system that can't be filled even in peacetime.

“I don't believe it's doable when you take your platforms down to this degree and you're still putting people on deployment schedules,” said this senior service official. “You can argue on the margins whether you need quite as many people here or there. But these hospitals support training as well as provide care and keep people in operational units.”

After deep staff cuts, “you're going to have a very hard time keeping docs, especially in uniform,” he said.

Ironically, he added, these staff cut plans arise near the end of wars in Iraq and Afghanistan where U.S. military medicine produced “the best outcomes in combat casualty care in the history of the world.”

Senior defense officials answered such concerns with assurances DHA and the services are giving careful consideration to readiness needs, including wartime requirements. Military facilities still will have robust civilian staffs, they added, and will be able to backfill with reserve medical personnel and civilian contracts.

Officials conceded the staff cuts, and refocusing on deployable skills, over time will change the mix of providers delivering care on base, forcing more family care off base and onto Tricare provider networks.

“We will expect to see an increase in certain skill sets a decrease in other skill sets. More trauma surgeons, fewer pediatricians, for example. Those kinds of changes are right at the heart of what Congress has directed us to do,” said one official.

“The reason why we do graduate medical education is to be able to supply that ready medical force,” said another senior official. “We need to expand our capacity in some areas” but will see them “contract” in others.

Some critics of the staff cuts suggest a desire for budget savings is a key factor. Navy documents identify “expected total savings of $1.14 billion” from that service's uniformed medical “end-strength divestiture” plan.

“How do we get higher levels of medical readiness for the next major conflict? That central question is going to drive a lot of changes throughout the military health care system.”