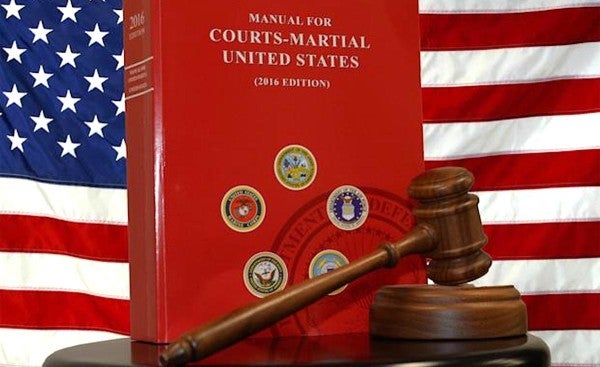 A new legal opinion from the Navy–Marine Corps Court of Criminal Appeals says court-martialing military retirees is unconstitutional — and the reason concerns the issue of retirement pay.

Chief Judge Navy Capt. James Crisfield delivered the opinion last week, joined by Senior Judges Navy Capt. Marcus Fulton and Marine Col. Jonathan Hitesman. The decision was made as a result of an appeal from retired Chief Petty Officer Stephen Begani, who was court-martialed after leaving the Navy on charges of attempted sexual abuse of a child.

Begani was picked up by Naval Criminal Investigative Service agents on Aug. 5, 2017, a little over a month after he left active duty and was transferred to the Fleet Reserve. He was arrested when he arrived at a residence at Marine Corps Air Station Iwakuni, Japan, where he was employed as a contractor. Begani had been communicating with someone who he believed to be a 15-year-old girl, but who was actually an undercover NCIS agent.

He was sentenced to 18 months confinement and a bad-conduct discharge.

Begani was court-martialed because of a federal law that leaves some troops subject to the Uniform Code of Military Justice long after they hang up the uniform. Marines and sailors who leave active duty after more than 20 years in uniform but less than 30 and who want to collect retiree pay move into the Fleet Reserve or Fleet Marine Corps Reserve.

There they receive what is essentially retainer pay and can be summoned back to active duty without their consent in the event of war or a national emergency. After 30 years of active or inactive service, retirees are then transferred to the Regular Retired List and they're no longer subject to the UCMJ.

None of this is true for retired reservists, though, which is why Crisfield argued in his written opinion that treating one group of retirees different than another is unconstitutional.

Zachary Spilman, a lawyer who specializes in military justice and the lead contributor to the military justice blogCAAFlog, where he first wrote about the decision, called the opinion “a bombshell.”

As Spilman noted in hisTuesday blog post on the decision, Begani did not challenge jurisdiction at trial, but he did challenge it on appeal. Begani argued that being subjected to the UCMJ as a retired regular component member while retired Navy Reserve members are not “violated the Fifth Amendment Due Process Clause's guarantee of equal protection of the laws.”

Navy Lt. Daniel Rosinski, who represented Begani, argued that there's no difference between a reservist retiree or one who left active duty. They're all out of uniform, none are subject to military duties on a day-to-day basis, and they can all be recalled to active duty, Rosinski said in his oral arguments. But a reserve retiree in Begani's case would have been tried as a civilian.

Since they're “similarly situated,” Rosinski argued that active and Reserve military retirees should be treated no differently when it comes to UCMJ jurisdiction.

“There are good reasons to subject full-time active-duty personnel to military jurisdiction,” Rosinski said. “They're performing military duties on a day-to-day basis and there's a compelling governmental interest in regulating their conduct.

“But there's not good reason to distinguish among those non-active-duty personnel — active-duty retirees, retired reservists and selective reservists — for purposes of court-martial jurisdiction,” he added.

Spilman said that's where the judges' opinion — which essentially agrees with Rosinski's point — is flawed. The judges' opinion acknowledges that the retainer pay regular retirees like Begani receive come with the obligation that they'll “maintain readiness for active service in event of war or national emergency.”

“That's hardly an insignificant obligation; maintaining readiness for active service — while not a particular specific demand — undoubtedly requires a person to remain ordered and disciplined, the maintenance of which is the very reason for a military justice system,” Spilman wrote on Tuesday. “Furthermore, the federal courts have recognized that the Fleet Reserve was established for that specific purpose.”

In a Thursdayfollow-up post, Spilman again reiterated that those like Begani who are in the Fleet Reserve or the Fleet Marine Corps Reserve receive retainer pay, which is different then retired pay, and that a member “must actually be in that status to get the money.”

Spilman told Military.com on Thursday he believes there's “zero chance” the government will not ask the Navy-Marine Corps Court of Criminal Appeals to reconsider its decision.

The U.S. Supreme Court earlier this year upheld the Defense Department's authority to prosecute military retirees for crimes they commit when it opted not to hear the case of retired Marine Staff Sgt. Steven Larrabee, who was convicted of sexually assaulting a bartender.

The Navy-Marine Corps Court of Criminal Appeals opinion could now affect other cases, Spilman said. That includes Larrabee's, who has taken his case to the U.S. District Court in Washington, D.C.

Stephen Vladeck, a professor at the University of Texas School of Law who represents Larrabee, has argued, like Rosinski that military retirees should not be subject to the UCMJ. Hetold Military.com in February when the Supreme Court declined to hear Larrabee's case that the idea that retirees could be pulled back into active duty was outdated.

“Increasingly, the function has been performed by reserves, not retirees,” Vladeck said at the time.

Not everyone agreed, though. Retired Air Force Maj. Gen. Charles Dunlap, a professor at Duke University's law school,wrote in February that it's up to retirees who don't want to keep a relationship with the military to terminate their commission or request a discharge.