Petty Officer 1st Class Mike Sency is the victim of a long-running series of scams that steal photos of U.S. service members and use them to swindle money out of people online 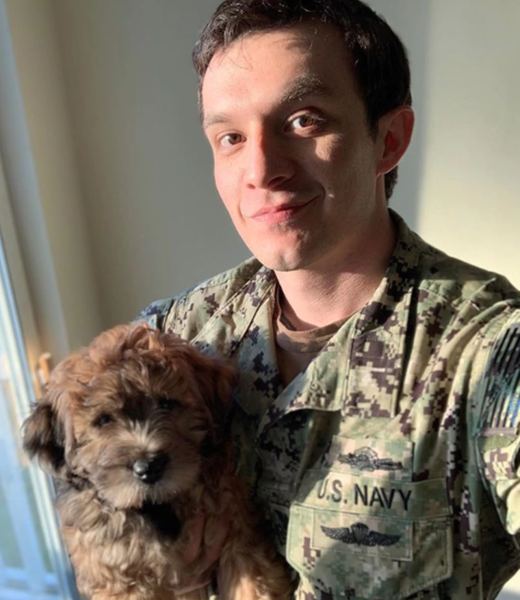 Up to 10 times a day, Mike Sency’s phone pings with a message from someone angry he stole their money or abandoned their online romance.

“How dare you to ever tell me you love me,” read one recent Facebook message he received, explaining his actions had made the sender feel “completely empty inside.”

“I can’t believe your (sic) going to play dumb.”

But Sency, a petty officer 1st class stationed in Virginia Beach, has never met or even communicated with any of these people before.

The 30-year-old is the victim of a long-running series of scams that steal photos of service members and use them to swindle money out of people online. And with the novel coronavirus (COVID-19) pandemic keeping people inside, it’s gotten even worse.

“Everybody’s bored at home so people are taking advantage,” said Sency, whose story was first reported by NBC News. “It’s not terribly difficult to steal pictures, form a romantic connection and then” use that to your advantage.

It works like this: a scammer takes photos of someone like Sency, creates a fake social media account and develops a new online persona — sometimes using the real name of the person in the photo. Then the scammer will strike up online conversations with women around the world, many of them older or vulnerable, and pretend to be in a hard spot.

“They like to use this sob story of, 'I’m deployed to some austere land and my wife and kid have left me … My unit left me and I’m stuck in this country. I need money for the flight home,’ ” Sency said. “Which makes no sense if you know anything about the military.”

The scammers often continue these digital romances over long stretches of time, gaining the victim’s trust and prying out more money. Sometimes they solicit risque photographs and use them as blackmail.

Such online scams are known as “catfishing,” and can be used for financial gain or abuse, among other things.

The U.S. Army’s Criminal Investigation Command receives hundreds of reports a month from victims who have been tricked by people impersonating a soldier online, according to its website.

“Victims of these ‘romance scams’ report they became involved in an online relationship with someone they believed to be a U.S. Soldier who then began asking for money for various false service-related needs,” according to the website. “Victims of these scams can lose tens of thousands of dollars and face a slim likelihood of recovering any of it.”

But Mack Hickman, acting special agent in charge of the Norfolk field office, said in an email that while officials have “not yet noticed a pattern regarding this specific kind of scam, NCIS is investigating various online scams targeting service members across all ranks around the world.”

Sency believes he knows why he’s been targeted. In addition to being in the Navy, he co-hosts a popular military podcast called The Smoke Pit and maintains a sizable public presence for it online. Some of his social media accounts are public, allowing people access to plenty of photos of him.

He’s talked about the issue on the podcast, and fans and friends even helped track down some of the hoax accounts’ IP addresses — numerical designations that reveal a computer’s location. Many lead back to Nigeria.

That fits into a pattern documented in a New York Times investigation last year. Some of the scammers in Nigeria call themselves the “Yahoo Boys,” the Times reported, and they told the newspaper that the “love hoaxes” are lucrative and low risk.

“There are so many people out there that are lonely, newly divorced, maybe widowed,” Kathy Waters, head of a group called Advocating Against Romance Scams, told the Times. “Everybody wants somebody to love and to listen to them and hear them. And these scammers know the right words to say.”

Sency said he knows others in the military who have been similarly affected, including soldiers at Fort Bragg and Marines at Camp Lejeune. But not everybody is vocal about it.

“I’m kind of at the forefront of this,” he said, explaining that many of them “are embarrassed and don’t really want to talk about it.”

Sency has grown used to the daily barrage of messages variously accusing him of terrible things or warning him he’s being impersonated.

“It’s just been growing unfortunately,” he said. “I’ve become kind of numb to it.”

Still, the people who reach out financially or emotionally devastated are the hardest to stomach. All he can do is tell them to report the account and contact the authorities.

“They’ll become furious, say, ‘We’ve been in love for years,’ ” he said. “You can’t speak reason to people who have been catfished for years, I guess.”

The scariest are those who want to meet up in person. Spurned victims have also come after his girlfriend online, accusing her of trying to steal their man.

“One of my buddies actually had a woman who flew in from another country, found out where he was stationed and tracked him down physically,” Sency said.

Facebook has been pretty good about quickly shutting down the hoax accounts, he said. Others have popped up on Instagram, TikTok and dating apps like Tinder.

The whole thing has been a lot to handle, Sency said.

“At first its like, OK, obviously I empathize, I want to help as much as possible. But at this point I just say, ‘Please report the profile,’ and leave it at that.”