With COVID-19 spreading, the US military is dealing with a social-distancing problem

Social distancing is a bit of a challenge for an organization that's built around working in tight-knit teams. 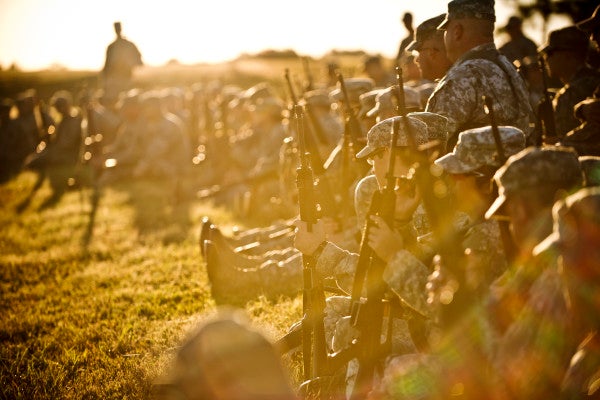 Amid the national effort to respond to the spread of the COVID-19 virus, the US military has stepped up to assist as it works to protect its own personnel from the rapid spread of the disease.

Military leaders have scrambled to alter the force's behavior to insulate their troops, but the nature of the military, that of a massed force working in close quarters, is a limitation on those efforts.

The White House and the Centers for Disease Control have promoted social distancing as a way to halt the spread of the disease, which is thought to be mainly between people within 6 feet of each other. Senior leaders and commanders have said they're embracing those tactics.

“We are altering exercises, training, and our current day-to-day operations to ensure safety for all,” Army Secretary Ryan McCarthy told reporters Friday, saying that as of 7 p.m. on Thursday the Army had 45 coronavirus cases, including 21 soldiers.

The Army “is a people organization,” used to eating and working out together, McCarthy said, but “to prevent the spread of the virus, we must adhere to the social distancing guidelines of the CDC, such as quarantining and hand-washing.”

US European Command has “approximately 72,000 US uniformed military members, and at this very moment we have approximately 35 reportedly cases of the coronavirus,” Air Force Gen. Tod Wolters, head of the command, said Friday morning.

“The measures we are taking are all of those that nations have put in place,” Wolters added. “One of the very effective ones that we believe is helping is social distancing, but all of the practices that you're familiar with and all of us have read about in the news, we are embracing here in Europe.”

Wolters' command is also overseeing the reduction of Defender-Europe 20, which was supposed to be the US Army's biggest exercise in Europe in 25 years but has become one of many exercises to be reduced in size or canceled due to the coronavirus.

In the context of a large, multinational exercise, a disease like coronavirus is “something you've got to take the appropriate precautions [for], because it can spread quickly and have an immediate … impact on readiness and health of the force,” retired Army Gen. Curtis M. Scaparrotti, who led European Command between 2016 and 2019, told Insider this week.

“I think the fact that they've limited the exercise, stopped the movement, those kind of things are indicative of that, and [European Command's] taken the right precautions to ensure that they take care of the force first, as a first priority,” Scaparrotti added.

'It's a pretty agile force'

Soldiers in barracks or in the field, sailors in port and at sea, and airmen on base or in the air all live in close confines, sharing space to eat, sleep, shower, and relax.

Senior military leaders have said the force's average age and general level of fitness suggests, Defense Secretary Mark Esper said this week, that “they are less likely to contract and show symptoms at the rates of people older than them.”

But that doesn't make them immune. Esper said Friday morning that the number of service members who've contracted COVID-19 had risen to 67, up from 51 on Thursday.

The Pentagon implemented social-distancing guidelines on March 9, and the effects have been evident in the Pentagon. Elsewhere in the military, such precautions have arrived slower.

That same day, “hundreds of employees” from the US Army Aviation and Missile Command gathered for a town hall with the unit's commander to discuss issues facing its workforce. A day later, leaders at Fort Leonard Wood in Missouri held a town hall to discuss concerns about the COVID-19 virus.

The problem is more acute in the Navy, where small living and working spaces put sailors and Marines in tight confines.

A day after the Navy's March 15 announcement that a sailor aboard the USS Boxer, which was docked in San Diego, had contracted the illness, the ship's leaders ordered dozens of senior enlisted sailors and officers into a cramped room for a briefing on social distancing, according to ProPublica.

One sailor told ProPublica that some 80 crew members spent the roughly 30-minute meeting standing about 2 feet to 4 feet from each other — “Definitely not enough room to maintain appropriate distance,” the sailor said.

The Navy has reported four cases of the coronavirus — two on the Boxer, and one each on the destroyer USS Ralph Johnson and the littoral combat ship USS Coronado.

Those cases are on ships in port, and the affected individuals are isolated, Rear Adm. Bruce Gillingham, the Navy's surgeon general, told reporters Thursday.

“Our ships that are operating out at sea … because of those enhanced measures that were undertaken weeks ago, we have not seen active transmission,” Gillingham said. “So we believe they are essentially self-quarantined in place.”

The Navy has also told its commands to avoid mass gatherings and implement social distancing to the greatest extent possible.

Asked on March 17 whether the Pentagon would issue a moratorium on these kinds of mass gatherings, Defense Secretary Mark Esper said he didn't plan to do so, “at least not as this time.”

“That has not been raised to me as a problem at this point in time,” Esper told reporters. “My view is the commanders have the authorities they need to take whatever precautions.”

Scaparrotti, the former European Command commander, said that because of the military's “ability to operate as an organization, a military one that's disciplined, that has a focus on health of the force, that has in part of it a good medical system,” it's “probably in a little better shape” to respond to the challenge posed by coronavirus.

“It's a pretty agile force, when it comes to being able to deal with the unknown or the unexpected,” Scaparrotti said.

'This is a good order and discipline issue'

The State Department has told US citizens to avoid international travel, but the military's service branches are still preparing for troops to return from and deploy abroad.

In a remote training area at Fort Bragg in North Carolina, large tents have been set up in recent days for hundreds of 82nd Airborne Division troops who are returning from Afghanistan and other deployments in the Middle East. The tent city is being called Forward Operating Base Patriot, or FOB Patriot.

In Europe, some of the thousands of soldiers who deployed for Defender-Europe 20 are preparing to return to the US ahead of schedule. Upon their return, they “will be quarantined for 14 days and follow CDC guidelines for preventing the spread of COVID-19,” US Army Europe told Insider this week.

Later this spring, roughly 2,500 Marines will deploy to Darwin in northern Australia for a six-month rotation. Upon their arrival, they will spend 14 days “will be restricted to their rooms with access to necessary supplies.”

“Once we have ensured those quarantined are free of the virus, operations will proceed as scheduled,” a Marine Corps spokeswoman told Stars and Stripes.

How effective those quarantines will be is another question.

One soldier returning from Afghanistan this month told The Daily Beast that his 14-day isolation period at Fort Bliss in Texas — spent in a 15-foot by 15-foot room with three other soldiers, one bathroom, and little to do — was “the most dysfunctional Army operation I've ever seen in nearly 17 years of service.”

Photos obtained by The Daily Beast also showed soldiers who were supposed to be quarantined mingling with other soldiers at Fort Bliss and Fort Hood, also in Texas.

Sgt. Maj. of the Army Michael Grinston, the service's senior enlisted member, said Friday that senior commanders were looking into issues raised about the quarantine conditions at Fort Bliss.

Wolters, the head of European Command, said his command had about 2,600 personnel that fall into the category of “concern” and that he's been able to talk by phone or video with those who've tested positive and those who are in quarantine.

They “remain in good shape and very, very positive,” Wolters said Friday. “My biggest challenge for those that have been quarantined for 14 days, as you can well imagine, is making sure that they understand that they by golly will adhere to the tactics, techniques, and procedures, and the rules and regulations that we've put out, and they're doing so.”

“This is a good order and discipline issue that we take great pride in accomplishing,” Wolters added, “and part of that is making sure that we stick to the rules, but so far the force remains in good shape.”