“Preppers” – as in “preparing for an apocalypse” – are an eerily steady part of the clientele at M>, a... 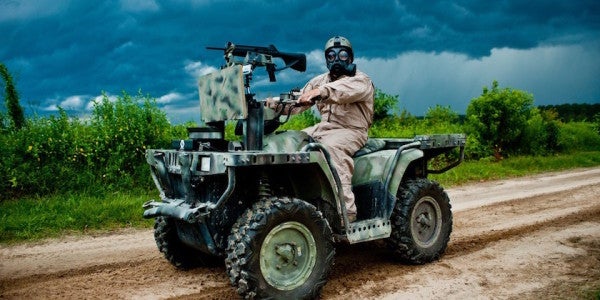 “Preppers” – as in “preparing for an apocalypse” – are an eerily steady part of the clientele at M>, a military supply surplus store on Granby Street.

War, terrorist attacks, ominous calendar dates (remember Y2K?) — even elections — can spike their numbers. In between, they arrive in a reliable trickle: two or three customers a week looking for gas masks, chemical suits and food rations.

Preppers come in all kinds. Some look like soccer moms. A few are mentally ill.

But they all have one thing in common: a conviction that doomsday draws near.

“Some are regulars in here,” says store owner Larry Friedman. “They do a lot of looking, but they never seem to have much money to spend. You never know about the others. They come in, seem perfectly normal, and then suddenly, they’re talking about the apocalypse. You do a double-take.”

Most often, they’re bracing for a collapse of the federal government or a war between the government and its citizens.

Related: A Survival Expert Prepares Your Family For Any Disaster »

“We try not to engage them in too much conversation,” Friedman says. “I usually pass them on to my new guys to help.”

That’s often Lincoln Livingston, with three years on the job.

“Lucky me,” he says, grinning at Friedman. “When do I get to stop being the new guy?”

Friedman laughs. He grew up working in the store, which was owned by his late father. He figures he’s already put in his time with preppers.

“It really started in ’91 with Desert Storm,” he says. “People were worried about Scud missiles and chemical weapons from Iraq. We had so many people waiting we almost couldn’t close the doors. We sold every gas mask we could get our hands on. That was off the hook.”

Ten years later, 9/11 created another peak. “Now that really did feel like an apocalyptic event,” he says. “I try not to judge.”

Items like gas masks are sold as “nonfunctioning,” Friedman says. They’re military surplus, with a top price of $50.

“Besides,” he says, “you’d have to know exactly what kind of gas you’re dealing with and have the specific cartridge for it. So no, we don’t guarantee they’ll work. Then again, maybe we should. If the apocalypse breaks out, who’s going to sue me?”

Full-body suits – known as NBC for nuclear, biological and chemical – sell for $60.

“Again, it’s not rational,” Friedman says. “They’re only meant for temporary use — to get from a dangerous area to a safe area. If everything is contaminated, they might help you for a short amount of time, but you can’t live in them like an astronaut suit.”

“We get some survivalists, too,” says Darnell Johnson, who’s been working there for 11 years. “Don’t confuse them with the preppers. Survivalists just like living off the land. Preppers are trying to figure out how to face the actual end of society.”

Some have done research. “Like the man the other day who was interested in buying gas masks for his entire family,” Johnson said. “He knew exactly what he wanted.”

Others are just feeling around, fueled by religious prophecies of Armageddon or an internet full of dark conspiracy theories.

“A mom came in asking about gas masks,” Johnson said, “and her kids were all standing behind her shaking their heads at me, like ‘no, please don’t encourage this.’ ”

Friedman says M> tries not to “feed the frenzy. I don’t usually say much, but if they ask me, I’ll tell them: ‘I’m not stockpiling gas masks for my family. What does that tell you?’ ”

Fortunately, he says, the preppers are “fringe.”

“If there were more of them, I might start to worry: Do they know something I don’t?”

M> is expecting a bump in business for Halloween – kids and grown-ups hunting for costumes amid the military gear.

It’s too soon to tell whether Nov. 8 will have an impact. Whatever way the presidential election goes, Friedman says, “some people will probably think it’s the end of the world.”