Active-duty U.S. Air Force doctors, nurses and other medical providers are being sent to work in California hospitals to assist... 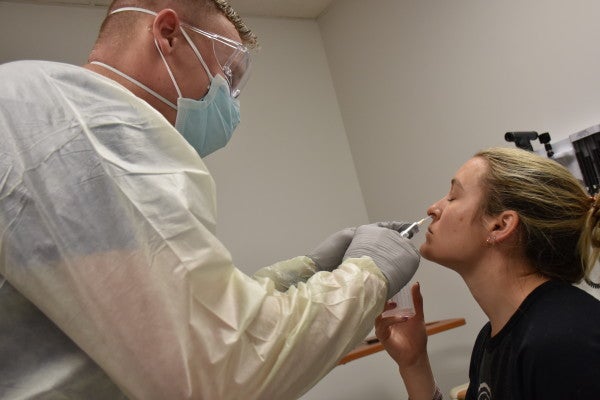 Active-duty U.S. Air Force doctors, nurses and other medical providers are being sent to work in California hospitals to assist with a steep rise in coronavirus cases that has strained some healthcare systems across the state.

The 100 healthcare professionals began work Friday in five hospitals experiencing severe staff shortages after a request for aid by the state. An additional 60 providers will be deployed in the coming week, a military spokesman said.

The move comes as some officials have described hospital staffing — not bed capacity — as the chief stumbling block when it comes to scaling up operations to accommodate more patients.

Dr. Alan E. Williamson, chief medical officer at Eisenhower Medical Center, said his team sent a request to the local public health department two weeks ago after exhausting the normal avenues for additional staff, such as hiring travel nurses, and failing to find enough personnel because of the nationwide demand for medical workers. His hospital received a team of 21 airmen including three doctors, 12 nurses, three respiratory therapists, two liaison officers and a physician assistant. The group is scheduled to work for 30 days.

“We weren't expecting a team like this,” Williamson said. “They've been great to work with. They're very can-do. They said, 'Just tell us what you need us to do and we'll figure out how to do it.'”

Related: Your friendly neighbor Jim Mattis wants you to wear a face mask

Williamson said his hospital is at about 80% capacity for beds but has no more available staff. With about 70 COVID-19 patients, down from 90 earlier last week, his facility had among the highest number in Riverside County.

Col. Martin O'Donnell, a spokesman for U.S. Army North, said the state of California, in coordination with the Federal Emergency Management Agency, will determine which areas have the greatest need for the remaining 60 personnel, with the possibility of more hospitals receiving the assistance.

Additional teams “are still being formed and will be deployed to COVID-19 hot spots throughout the state including Imperial County,” Brian Ferguson, spokesman for the California Governor's Office of Emergency Services, said Saturday in an email. Imperial County has remained a persistent trouble spot: The most recent three-day average of daily hospitalizations represents an 18% increase, according to The Times' coronavirus tracker, and available intensive care beds have dwindled to just six.

In San Joaquin County, which has so far received two military teams, officials said Friday that hospitals were operating at 75% capacity but intensive care units had reached 114% capacity. A total of 198 COVID-19 patients were in the county's seven hospitals and 63 were in intensive care, both numbers at their highest since the pandemic began, according to the county's Office of Emergency Services.

At Adventist Health Lodi Memorial, which had 39 COVID-19 patients and six in intensive care, a clinical team of 21 doctors, nurses and respiratory therapists is helping to provide additional resources, spokeswoman Lauren Nelson said in an email.

“They will also offer reinforcements for our medical professionals who have been on the front lines serving patients throughout our COVID-19 response,” the hospital said in a statement.

The team will be there at least 30 days, though the arrangement has the potential to be extended, Nelson said.

Related: No mask can protect you better than a PT belt mask

Dameron Hospital in Stockton, which also received a military medical team, had 16 COVID-19 patients and five in intensive care as of Friday, according to the Office of Emergency Services.

Officials believe transmission of the virus began to increase in late May as more people left their homes to go back to work, visit newly reopened businesses and attend social gatherings.

California has seen hospitalizations increase steadily since mid-June, on the heels of a surge in new cases that began earlier in the month.