A former US military translator was deported back to Iraq, leaving behind 7 kids — including a Marine cadet

"I am too afraid to leave the house," Bazoni told Reuters. "I don't know anyone here and I don't have any money" 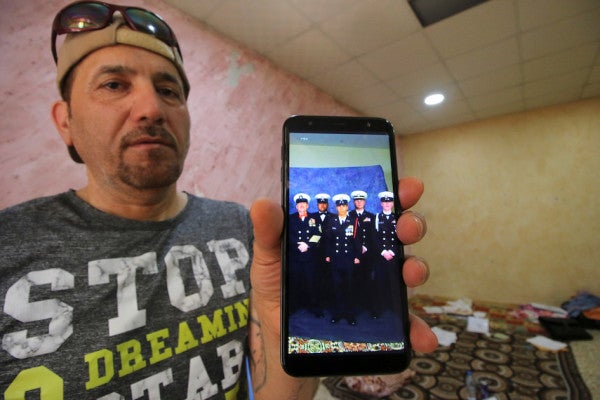 BAGHDAD (Reuters) – Since being deported from the United States in January, Hani al-Bazoni has spent most of the past eight months in a small room in the Iraqi city of Basra, waiting for his sister's daily visits.

Some days, he says, he struggles to get up from his mattress on the floor. On others, he looks at pictures of his wife and seven children, all U.S. citizens: his eldest is a cadet in the U.S. Marines, his youngest is three.

“I am too afraid to leave the house,” Bazoni told Reuters. “I don't know anyone here and I don't have any money.”

Bazoni is one of dozens of people of Iraqi origin deported from the United States since 2017, when Iraq agreed to take back its citizens with criminal convictions as part of a deal to remove itself from President Donald Trump's travel ban targeting people from several Muslim-majority countries.

As a refugee in the 1990s, Bazoni moved to the United States, where he spent time in jail on assault charges. He also worked as a translator for the military. That job leaves him vulnerable in Iraq, where influential Iranian-backed militias oppose the presence of U.S. troops.

His family won't let him go outside, scared that paramilitaries might round him up.

Prior to 2017, Baghdad had refused to allow such repatriations, citing political, logistical and human rights concerns.

“I never thought I'd come back to Iraq,” Bazoni said. “I lost my job, I lost my family, I lost my kids. And maybe soon, I'm going to lose my life.”

Hani al-Bazoni, who was deported from the United States to Iraq under U.S. President Donald Trump's strengthened immigration enforcement, shows his deporting letter during an interview with Reuters at his home in Basra, Iraq August 19, 2019. (Reuters/Essam al-Sudani)

Following the 2017 deal, the U.S. Immigration and Customs Enforcement (ICE) arrested hundreds of the 1,400 Iraqis eligible for deportation because they had criminal convictions, which would have prevented them from gaining U.S. citizenship.

It said at the time it was arresting people with convictions for violations from homicide to drug charges who had been ordered removed by an immigration judge.

The American Civil Liberties Union (ACLU) sued on their behalf. Though initially successful in stalling deportations, the case was overturned after appeals, and deportations picked up in April.

“Deportees are treated with immediate suspicion, simply caused by their association with America,” said Daniel Smith, a human rights researcher who has been an expert witness in dozens of deportation cases.

Some arrive in a country they haven't seen in decades, with no network, no identity documents and little Arabic. Their vulnerability leaves them open to accusations of spying, kidnapping for ransom and harassment from militias, Smith said.

In interviews with Reuters, nine men sent back to Iraq described their struggle to reintegrate. Separated from families and jobs, they said they were depressed, suicidal and feared for their safety.

Several claim mistreatment by ICE, which they said coerced them into signing deportation orders or stole money they were arrested with. ICE did not comment.

One of the men, Nash, 55, who asked Reuters not to use his full name, said he spent two days sleeping on a bench in Baghdad airport with nowhere to go after his deportation, until a stranger lent him a phone so he could find a place to stay.

He found a roommate, Jimmy Aldaoud, a fellow deportee from Michigan. Both were from minority Christian communities, which the Trump administration has said it wants to protect.

Aldaoud was born in a Greek refugee camp to Iraqi parents and had never been in Iraq before his deportation. The 41-year-old had mental health issues and diabetes. He died last month because he couldn't get access to care in Iraq, his family has said. He was buried in Michigan two weeks ago.

“There will be more Jimmy Aldaouds if this continues,” said Congressman Andy Levin, a Democrat from Michigan who says the deportations violate U.S. law and is seeking bipartisan support for a bill to stall them.

Levin's district has the highest number of Iraqi-born residents in the country, eight of whom have been deported since April, his office said. Most deportees committed their crimes young, and signed plea deals they hadn't understood would get their green cards revoked, Levin said.

“Most of these people they don't speak Arabic, they were never in Iraq or haven't been since childhood. They're totally Americanized,” Levin said. “You're basically sending them back to persecution, torture or death. Our policy doesn't allow that.”

Nash, who worked as a roofer, was convicted in 1989 on a petty drug charge. An immigration court found him deportable in 1994, and his green card was revoked. He earned several stints in prison in the ensuing years for non-violent, drug-related charges.

Levin, lawyers and human rights activists argue that if deportations can't be halted, the U.S. and Iraqi governments should at least give deportees proper documents.

Most no longer have their original Iraqi papers and said their U.S. documents were taken by ICE in detention. Iraq allows them to be deported on one-way travel documents, which last six months.

“These are not considered by local authorities to be an adequate proof of identity,” said Smith, which he said meant they were left vulnerable to arrest by Iraqi authorities.

Iraq's Embassy in Washington referred Reuters to the ministry of foreign affairs in Baghdad, which did not respond to requests for comment.

Obtaining Iraqi documents is difficult. Some deportees have waited weeks, months and in one case more than a year.

Nash has hit multiple dead ends in getting a new ID. The travel document that allowed his return to Iraq expired last month, and his birth certificate was stolen 40 years ago.

“According to Iraq, I have no identity,” said Nash. “But I was Iraqi enough to be deported.”

He said his efforts to obtain documents had involved digging through the rubble of his childhood home in Baghdad, tracking down relatives around the world on Facebook and trying to find his father's grave in Baghdad.

He's running out of options.

“I am 55 years old, I spent 40 years in Michigan, I never left: how much more American can I be?” he said. “I made a mistake when I was a kid, and I got locked up before I got citizenship, so fine I get it.

“But if I can't be an American, at least let me be Iraqi.”