As troops face mounting demands to serve in crises, civilian employers are firing them

Inside the fight to improve working conditions for service members, even when they're called to serve in an emergency. 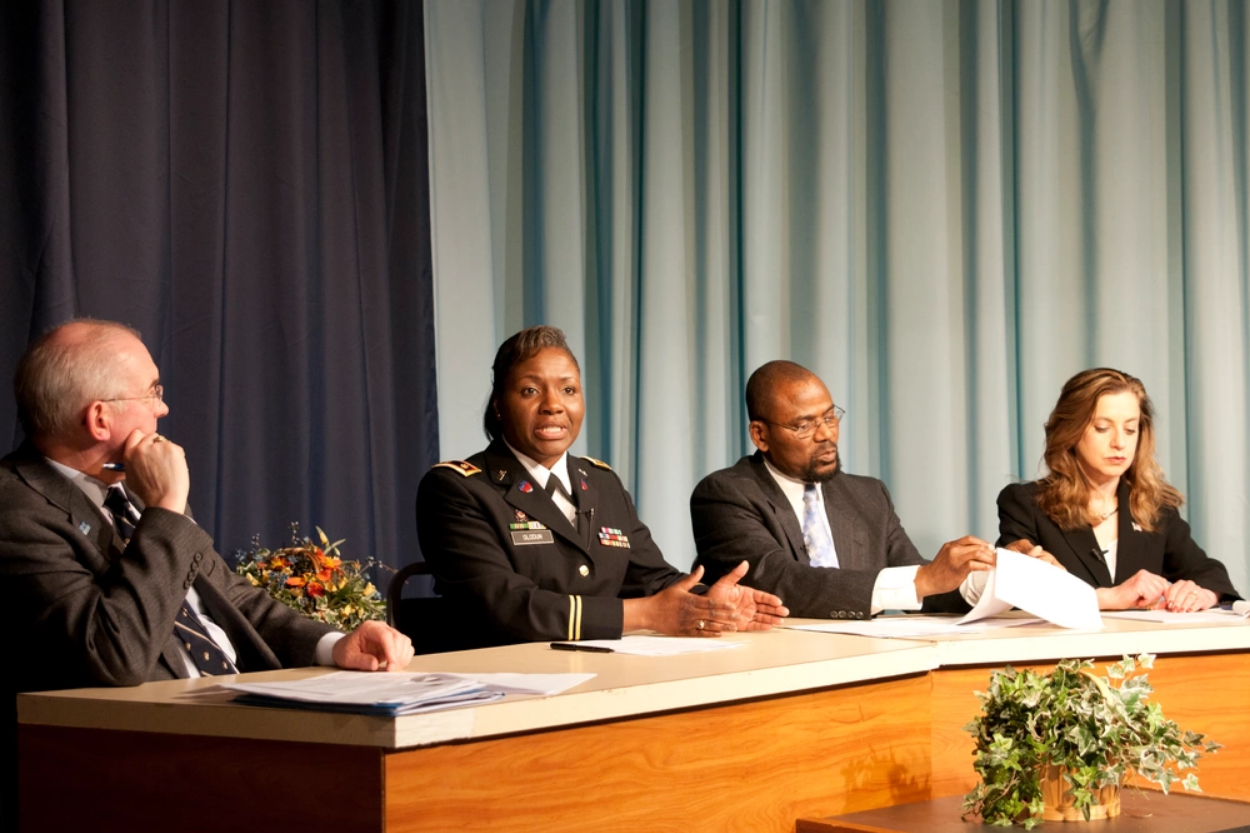 When Navy reservist and hospital corpsman Linda Jones didn’t get the promotion she hoped for at her civilian health care job, she turned to her manager to ask what she could have done better. She was surprised when he told her she was a great candidate. Then the conversation turned.

“He lowered his voice and said, ‘It’s not you at all,’” Jones says. “‘I think you’d be a great fit, like the best fit out of all the interviews that we had.’”

There was one problem: “You’re military.”

Her case is just one of hundreds around the country in recent years alleging an employer broke the Uniformed Services Employment and Reemployment Rights Act of 1994—or USERRA. The law bars employers from discriminating against service members, veterans, and even people who state an intention to join the military.

As pandemic response, fires in the West, storms in the South and East, and continued crises abroad have increased in recent years, the law ensures reservists and guardsmen don’t lose their jobs and other benefits when called to—temporarily—serve. But as some deployments drag on for as long as a year, many employers have flouted the law.

So, federal prosecutors, as well as private attorneys, have taken up cases to force employers to improve working conditions for service members, even as the Labor and Defense Departments work to resolve issues between service members before they become contentious. The cases range from mom-and-pop shops to international corporations.

Between 2004 and the 2020 fiscal year, Justice Department attorneys filed 109 lawsuits and resolved 200 USERRA complaints through consent decrees or private settlements.

‘They Have to Be Reemployed in the Same Position’

In the summer of 2020, Florida, like much of the country, was mired in a public health emergency. As first responders responded to Covid, Army Staff Sgt. Garrett Woodard grabbed his gear. His civilian job as an apprentice lineman with the Withlacoochee River Electric Cooperative Inc.—and his goal of becoming a journeyman—would have to wait..READ MOREEchoes Project: A World and a Lifetime Ago

As the crisis lingered, Woodard’s deployment was extended. On the day he reported back to his civilian job, the electric cooperative terminated him, according to the Justice Department.

Prosecutors declined The War Horse’s request for an interview, but the case ended in a $80,000 settlement in January. Woodard received back pay—as well as a promise from the cooperative that it would comply with the law, according to the Justice Department.

The cooperative also declined to comment about Woodard’s case, but David Lambert, manager for member relations, said in an email that the cooperative has 38 veterans, including four in senior management, as well as a “deep respect for the men and women who served and are serving our country.”

Army National Guard Maj. Mark Gunn was called to active duty in 2016, and the military extended his orders twice, according to federal court documents. When he finally returned to his job at the Prince George County Police Department in Virginia in 2018, he was told he would no longer be a detective.

Instead, he would have to retrain as a patrol officer, which was tantamount to an illegal demotion, alleges Deirdre Brou, assistant U.S. attorney for the Justice Department’s Service Members and Veterans Initiative. Gunn had worked at the department since 1999, entering as a patrol officer.

In April, the Justice Department announced it had reached a settlement for Gunn. Gunn could not talk about the case because of the terms of the settlement, but he received $12,756 in back pay and other benefits, including a higher monthly pension payment.

Federal prosecutors take up cases around the country, some with implications that reach beyond local management decisions. In 2020, for instance, Petty Officer Lindsey Hunger alleged that a Walmart in Grand Junction, Colorado, refused to hire her because she was a member of the Navy Reserve and needed time off for mandatory training, according to the Justice Department. Hunger won back pay and an agreement from Walmart to change its hiring policies across the country.

‘What We Call Equitable Relief’

Employers have paid millions of dollars for USERRA cases in recent years. The federal government’s share for the plaintiffs it has helped goes into the hundreds of thousands of dollars.

“In some cases, you have employers that want to dig in their heels and contest something,” Brou says, “and sometimes, it’s a dispute in the law—but a lot of times they’re just digging in their heels.”

Prosecutors like Brou don’t even hear about most cases. That’s because many employers, averse to cash losses, work out problems before they become contentious. More than 1,300 USERRA issues in the past fiscal year were mediated by the Defense Department’s Employer Support of the Guard and Reserve program. They were able to resolve about 80% of them informally.

When Defense Department intervention fails, the next step is a formal complaint with the Labor Department—still a far cry from a federal court case, Torrans says. The department may assign investigators to round up evidence and conduct interviews—and it may resort to administrative subpoenas.

“If the evidence supports the allegations, then we will advocate on the claimant’s behalf to obtain the appropriate relief under USERRA,” Torrans says. “That relief may include reinstatement of job, lost wages plus interest—what we call equitable relief, which is where the employer has to cease and desist some sort of bad behavior.”

Service members have fought their employers on these issues for decades. As a result, there’s a “big, amorphous lot of case law and statute” that goes back to troops returning home after World War II, Torrans says. Following the first Gulf War, the legal bits and pieces that accumulated over the decades were finally codified as USERRA, he says.

Despite its long history, discrimination in the workplace against service members seems to ebb and flow with historic deployments—from the Sept. 11, 2001, terrorist attacks to Covid.

In 2020, the department opened 944 new complaint investigations to add to the 164 cases still being completed from the prior year.

‘It’s Literally a Zero-risk Proposition for the Plaintiff’

Private attorneys around the country like Brian Lawler, a retired Marine in San Diego, can also take up cases. There’s no easy way to tally all the cases in courts around the country—and legal actions that don’t go that far—but Lawler says employers who are unaware or cavalier about the law keep him busy.

“On any given day, I have 30 to 40 active USERRA files, either already in the pipeline—as being active cases that have been filed—or ones that we’re working,” Lawler says.

Lawler’s cases include a victory in June in the U.S. Supreme Court: Torres v. Texas Department of Public Safety. In that case, LeRoy Torres lost his job because of a military-related illness. After being exposed to an open burn pit at Balad Air Base, Torres developed constrictive bronchiolitis, and the lung condition made it difficult to perform his duties. He requested a move to an administrative position, but was told he should resign instead. The 5-4 decision on his case allows individuals to sue state agencies for violating the law. Another of Lawler’s well-known cases ended in 2018 with a confidential class-action settlement with United Continental Holdings after Mark Duffer, a Continental pilot, alleged he was underpaid during military leave as a Marine Corps Reservist. The case centered on differing pension payments amid the United Airlines merger.

Lawler has also seen his share of smaller cases, like one involving a service member who badly twisted his ankle during a weekend military training. When he showed up for work as an apprentice the following Monday, he was on crutches.

“They’re getting ready to put him in a truck and send him out to work and he said, ‘Can’t do it. Sprained ankle,’” Lawler says.

Lawler alleged the apprentice was fired because of the injury and won a $3,000 settlement. Many attorneys wouldn’t take cases as small, Lawler says, but the USERRA law makes it possible. Under it, filing fees are waived, and the employer is potentially on the hook for attorney’s fees. If Lawler loses a case, the employer can’t counter-sue the service member for their attorney fees.

“It’s literally a zero-risk proposition for the plaintiff, other than the pain of having to deal with a lawsuit,” Lawler says.

Some cases can reap massive amounts. Private attorneys took on Walmart in another case—a class action lawsuit—that was settled for $14 million in 2021, according to Westlaw Today. The case involved Nickolas Tsui of New Hampshire, who claimed that a Sam’s Club did not provide him with full pay for his Army Reserve absence, yet maintained a policy of paying people for jury duty and bereavement leave. The case could affect as many as 10,000 Walmart employees, according to court documents.

‘It Was Just Really Straightforward’

As for Jones, the Navy Reservist who received a confidential settlement after being denied a promotion, she says she moved on to a new job. She asked The War Horse to use a fictitious name for this story because she received tens of thousands of dollars—roughly the equivalent of a year’s earnings—in her settlement, which has a confidentiality clause, a common practice in such settlements.

At first, she says she wasn’t sure that she had a case. She had never heard of USERRA until she went online and found a private attorney.

“I mean, it was just really straightforward,” Jones says of the time she needed for the Navy Reserve. “One weekend a month—Saturday, Sunday, and two weeks a year out in San Diego.”

The human resources department told her that supervisors were unaware of USERRA, she alleges. So she turned to the employee handbook she was handed when she started the job.

“It was like, ‘We do not discriminate against gay, military and all that,’” she says. It was a standard non-discrimination statement, she says, but the part where it says “military” was ignored.