As the Pentagon wraps up a sweeping three-year review of valor medals awarded in conflicts after September 11, 2001, officials are preparing to roll out a new policy designed to ensure acts of military heroism receive the full recognition they deserve 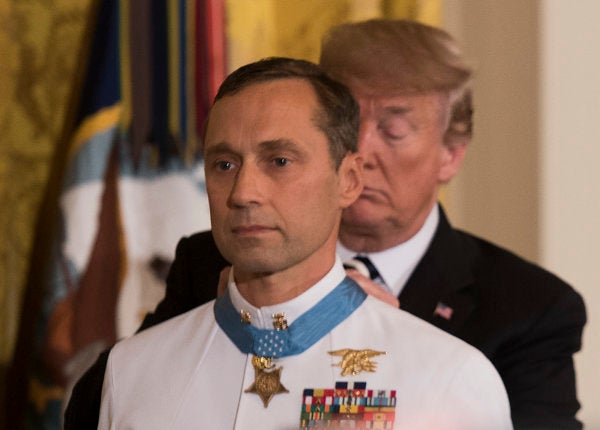 As the Pentagon wraps up a sweeping three-year review of valor medals awarded in conflicts after Sept. 11, 2001, officials are preparing to roll out a new policy designed to ensure acts of military heroism receive the full recognition they deserve.

Expected to be announced this month, the new policy will trigger an automatic review at the higher headquarters level within 120 days for any Silver Star or service cross not reviewed by the appropriate service secretary. This will help ensure that troops are not inadvertently approved for lesser awards than they deserve, said Patricia Mulcahy, the Pentagon's director of Officer and Enlisted Personnel Management.

“The view is, at the highest levels is where you would see more of these higher-level awards,” Mulcahy told Military.com. “And at a lower level, there are so few folks that do get the highest level of recognition that they might not be as familiar with it from a command perspective. So we're putting this additional review in.”

The Pentagon's medals review was launched in 2016 under then-Defense Secretary Ashton Carter out of concern that, due to inconsistency or lack of knowledge in the process, some troops who served in post-9/11 conflicts might be missing out on honors they were due.

In all, officials said, some 1,400 awards were reviewed — ranging from Bronze Stars with Valor to service crosses — and 57 medals were ultimately upgraded. The upgraded awards included four Medals of Honor, including two for the famous 2002 Battle of Roberts Ridge in Afghanistan; 30 service crosses; and 23 Silver Stars. Several Army awards are still in the review process and have yet to be announced, officials said.

Officials who spoke with Military.com said the review process did not reveal any trends indicating troops were being systematically overlooked for higher awards, but did indicate that familiarity with evaluating the most prestigious combat awards makes a difference.

“From an award criteria , for the Distinguished Service Cross, Air Force Cross, Navy Cross, it does say for actions not warranting award of the Medal of Honor,” said Doug Johnson, assistant director for Military Decorations and Awards Policy at the Pentagon. ” … And so by virtue of the way the criteria is written, you should be looking at it against the higher-level award criteria.”

The new automatic review policy, he said, will ensure that awards that cannot receive full consideration at a lower level due to operational demands or other pressures make it to the desk of the relevant service secretary quickly, for closer examination.

“That way, that organization that does regularly knows what that criteria is and can review what was approved downrange,” Johnson said.

A breakdown in the medal awards process is what prompted a multi-part review of the system and of decided awards in the first place.

Then-Army Capt. William Swenson, who received the Medal of Honor in 2013 for heroism during the Battle of Ganjgal in Afghanistan in 2009, was subjected to a 19-month delay in receiving his award due to lost paperwork, prompting a public apology from then-Defense Secretary Chuck Hagel.

When the Pentagon announced Carter's medals review in 2016, it also rolled out a number of changes to the awards process. Among new requirements introduced then were a 45-day deadline for initiating nominations for awards following valorous action; a one-year time limit on presentation of awards below the Medal of Honor; mandatory notification of the applicable service's decorations and awards branch by the first general or admiral endorsing a Medal of Honor nomination; and a review by the appropriate geographic combatant commander on Medal of Honor nominations following a service secretary's recommendation.

The case of one upgrade, in particular, highlights the significance of the pains the Pentagon has taken to revisit medal awards and give each service member his or her due.

Shurer, a Green Beret medic who heroically triaged wounded troops during a brutal 2008 battle in Afghanistan's Shok Valley, saw his award upgraded by two degrees, from Silver Star all the way to Medal of Honor. He received his rightful award last year amid another battle — with Stage 4 lung cancer.

“Mr. Shurer, it was passed on to me that he was very surprised the upgrade,” Johnson said. “We did keep it close hold. … It was a good news story that we were able to get him recognized.”

SEE ALSO: This Is What It's Like To Be Falsely Accused Of Stolen Valor

WATCH NEXT: Marines and the Medal of Honor