At least 15 troops were killed in vehicle training accidents last year, and now several of their families are pressuring Congress and the military to take action. 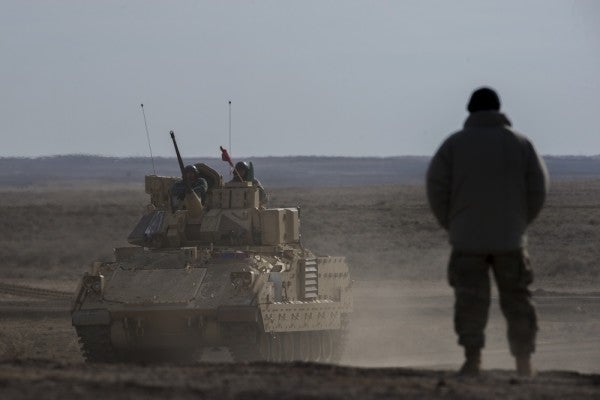 First Lt. Hugh Conor McDowell was following protocol when he told his light armored vehicle driver to leave the road where they were training on a California base and head into the nearby six-foot-tall grass.

It's a tactic officers learn at the Light Armored Reconnaissance Leaders Course. The threat of improvised explosive devices is higher along roadways, and Marines can make use of vegetation to camouflage their vehicles.

McDowell, a 24-year-old platoon commander, and six other Marines in the vehicle were participating in a May 2019 training exercise at Camp Pendleton, California. The lieutenant was standing in one of the vehicle's turrets to help guide his driver and spot mock enemy fighters who might be lurking nearby.

But the grass was thick, and the private first class driving the eight-wheeled vehicle slowed to a walking pace, struggling to see more than a few feet in front of him. When he hit the brake pedal after another Marine told him to stop, it was already too late.

The 12-ton vehicle was already rolling, pinning and killing McDowell as it flipped.

The Marines got no warning that a virtually invisible, two-story drop was hidden in the thick vegetation. There were no signs on the training range alerting them it was there, and the maps they used to prepare for the exercise did not reference the potential danger.

Michael McDowell, the lieutenant's father, said action must be taken to improve safety on military training ranges. His son was one of at least 15 troops killed in vehicle training accidents last year.

“We are seeking safety measures, which do not at all — I repeat at all — affect preparedness or readiness,” he said. “… We are spending billions and billions on drones, missiles, planes, ships, et cetera, but the very small budget stuff — range safety, vehicle reliability, driver training — are neglected.

“It makes absolutely no sense.”

More must be done to prevent the “100% avoidable” accidents, she said.

“[Nicholas] always wanted to fight for his country,” Weaver said. “… He's going to be incredibly missed. He was not just my son, but my best friend and my soulmate. We grew up together.

“It's very difficult, and I just can't let anyone sweep this under the rug.”

The Government Accountability Office is in the midst of a sweeping Army- and Marine Corps-wide investigation into vehicle training deaths.

The probe was mandated by Congress after Michael McDowell, his wife and his son's fiancée, Kathleen Isabel Rose Bourque, lobbied members of Congress to dig into the troubling trend of military rollover deaths.

Instead of finalizing details for the September 2019 wedding Bourque and McDowell were planning in Maryland, the Marine's fiancée was scouring military news sites to create a database of the accidents dating back to 2012.

Every time a new headline hit about another service member dying in a vehicle training accident, she said she relived the moment she learned of McDowell's death. The family began meeting with members of Congress and their staffs to push for action to prevent the tragic mishaps.

“We need people from both sides of the aisle to actually recognize this systemic problem and try to find a damn solution so it can end,” Bourque said. “Because I will tell you: Every single time I see one of those articles come up online that another person has been killed in a rollover, it rips my heart out, because I am brought back to that very first day when I found out my lover was dead.”

Cary Russell, director of the defense capabilities and management team at the Government Accountability Office, said they're looking into military-wide policies on vehicle safety and analysis, how accident data is collected and reviewed, and how training ranges are inspected for safety, among other topics.

Since the review, which began in October, is ongoing, Russell could not disclose the types of vehicles they're investigating or the specific installations they're visiting.

The Army and Marine Corps have been cooperative throughout the process, he added.

Russell's office serves as an independent government watchdog. The work it’s doing now is similar to the investigation it conducted after a spike in military aviation deaths following the wars in Iraq and Afghanistan.

Congress responded by pouring money into preventing aviation accidents, which rose 40% between 2013 and 2017, resulting in the deaths of 133 troops, a report by Military Times found last year. Michael McDowell said Congress can't wait until the GAO's report on ground-vehicle mishaps is complete to act.

“We don't need to wait until the fall when the inquiry is over and the report is published and Congress gets it and we get it and there are hearings,” McDowell's father said. “That takes time. There are people dying in between.”

The McDowells and Bourque have worked closely with Rep. John Garamendi, a California Democrat who chairs the House Armed Services subcommittee on readiness. Garamendi's office did not respond to a request for comment by press time, but Russell said he was one of several lawmakers to request the GAO investigation.

Garamendi told CBS News last month that the military needs to know that members of Congress are watching how they address vehicle rollovers and other accidents.

“We're not just letting this go,” he said.

Many of the recent investigations into military vehicle accidents that killed service members remain out of public view, including the one that killed Panipinto in South Korea. That makes it difficult to know what recommendations were made to prevent similar mishaps and whether military leaders have acted on them.

“We cannot have that many accidents, and we cannot lose soldiers in training,” he said.

Many casualties from tactical vehicle rollover accidents could have been prevented if soldiers had been wearing their seat belts, he added. As the Army gets back to using large vehicles for ground maneuvers, it requires renewed training on tactics many haven't used before, McConville said.

Weaver, Panipinto's mom, said she wants to see young soldiers tasked with driving Army vehicles getting more simulator training before they're operating them in real-world situations. She also wants the military to look at possible redesigns for vehicles with high rollover rates.

Troops deserve better training, she said, and the military must ensure anyone operating vehicles is licensed to do so. Her son was in the Army for less than two years at the time of his death, and didn't have a lot of experience driving the vehicle he was in at the time of the accident.

“Every time I would talk to him, he would be doing everything other than training,” she said. “As I research these deaths, it is a common similarity that the others hadn't been enlisted for long either.”

Panipinto had to be medically evacuated to a nearby base since there was no hospital on his installation. Weaver said she'd like to see training done on bases that at least have trauma-level facilities and blood banks.

Marine Corps officials say several training changes have been made in the aftermath of the LAV accident that killed McDowell. That investigation recommends crews get appropriate maps and imagery of the areas in which they're training and that 1st Light Armored Reconnaissance Battalion continue rehearsing rollover drills.

The investigation findings should also be briefed to the light-armored reconnaissance community, it states, so Marines can learn from it.

Officials with 1st Marine Division, McDowell's parent command, and Training and Education Command, which oversees training for Marines Corps-wide, did not respond to questions by press time about whether those recommendations were implemented.

The families of Panipinto and McDowell are committed to pressing military and congressional leaders to help prevent other fatalities.

“He shouldn't be dead,” Bourque said of McDowell. “There is absolutely no reason that Conor should be dead. His birthday is on March 11 — he should be turning 25. You know what I'm going to be doing? I'm going to be going to Arlington [National Cemetery's] section 57.

“It's absolutely infuriating,” she added.

Both families remember the Marine and soldier as patriots determined to serve. They joined the military to fight for their countries, Weaver said, and shouldn't have died in training.

“There are so many families going through this … and it feels like nothing is being done,” she said. “We need to band together.”

Bourque said she'll do whatever she can to prevent other families from experiencing training deaths.

“But I'll be damned if I can't protect somebody else.”