"Some of them held up their military service as proof of their dedication to democracy, even as they questioned the legitimacy of the electoral process." 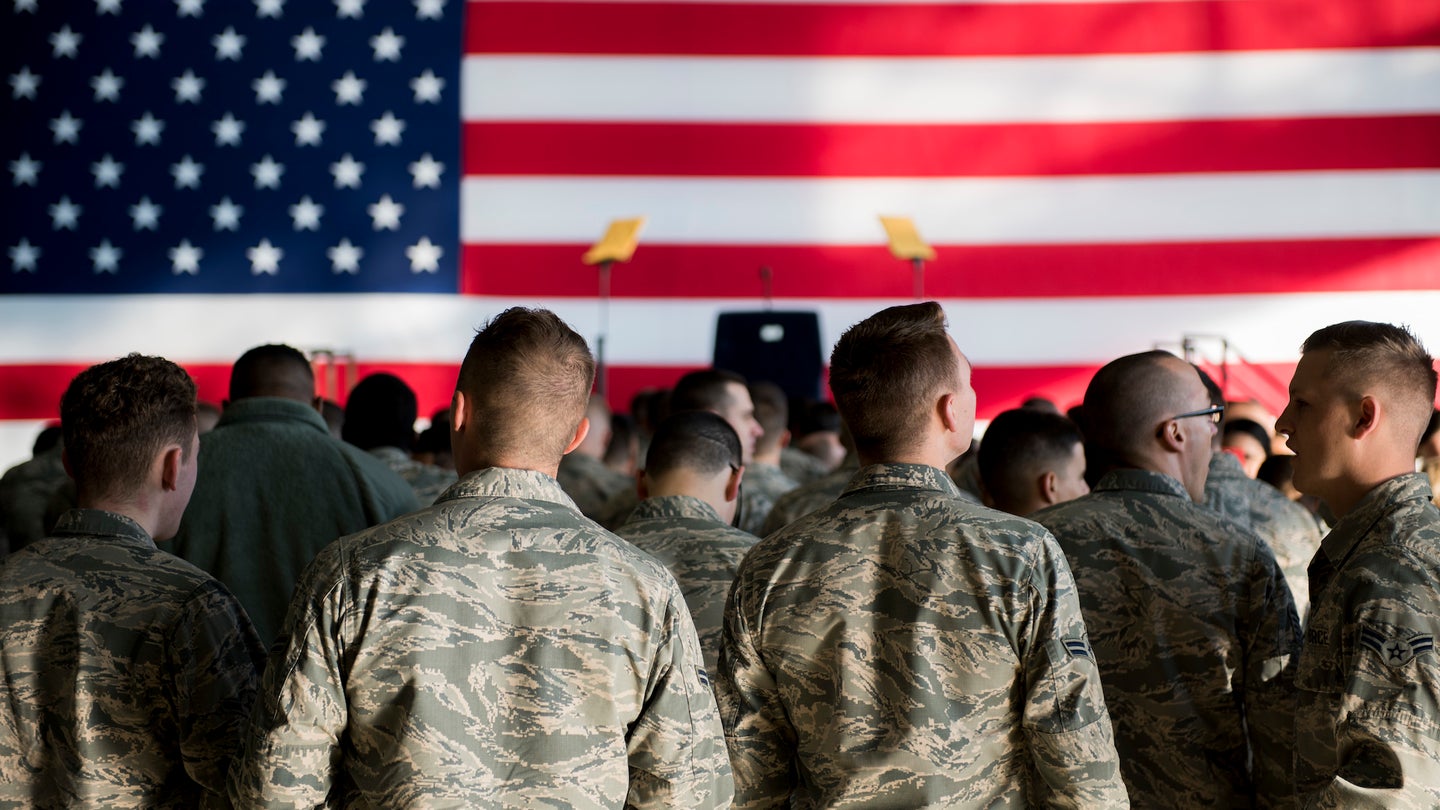 This article first appeared on The War Horse, an award-winning nonprofit news organization educating the public on military service.

More than a quarter of the candidates on the ballot in November who have publicly denied or raised questions or doubts about the legitimacy of the 2020 election have served or are serving in the military, an analysis by The War Horse has found. These include congressional candidates from a major political party as well as candidates for governor, secretary of state, and state attorney general—positions that oversee elections.

These baseless allegations of fraud follow President Donald Trump’s 2020 election loss by more than 7 million popular votes and by 306-232 in the Electoral College. Yet some veterans running for office have used their military records to add credence to their false claims—undermining faith in the very systems they swore to defend.

Election officials in every state have confirmed that there were no major electoral problems, a finding echoed in multiple Republican-led audits. More than 60 lawsuits alleging election impropriety have been thrown out. And an Associated Press investigation found fewer than 475 instances of potential voter fraud across the country, out of tens of millions of votes cast.

But claims of voter fraud and other irregularities in the 2020 election persist. Building on an analysis by FiveThirtyEight, The War Horse found more than 335 Republican candidates on the ballot this November who have publicly denied or raised questions or doubts about the security of the election—in interviews, public statements, or comments reported on in the press, on social media, or through actions that include joining legal challenges or objecting to certifying the electoral college vote on Jan. 6. Of these candidates, 96 served in the military — around 28%.

These veterans include high-ranking flag officers and decorated special operators, including Navy SEALs, Army Green Berets, and a Marine Raider, as well as Purple Heart and Bronze Star recipients. Some of them held up their military service as proof of their dedication to democracy, even as they questioned the legitimacy of the electoral process.

“I put my life on the line in the US Army to defend democracy at home and abroad,” John James, a West Point graduate who is currently running for a House seat in Michigan, wrote in a request to delay certifying election results after losing his 2020 U.S. Senate race by more than 92,000 votes. “The people of the state of Michigan deserve election outcomes that they can trust.”

Collectively, these candidates have served in every branch of the military except the Space Force, and their service spans seven decades. At least 12 candidates who have raised doubts about the 2020 election are currently serving in the Reserves or National Guard.

Veterans on the ballot who have questioned election results include newcomers to politics—like Eli Crane, a former Navy SEAL running for Congress in Arizona who has claimed the election was marred by fraud—as well as long-time incumbents, like California Rep. Darrell Issa, an Army veteran who has served 10 House terms. On Jan. 8, 2020, he tweeted, “It is in America’s enduring national interest that we do not ignore what we know to be wrong with the 2020 elections.”

The degree to which veteran candidates have questioned the election varies. Some have promoted baseless conspiracy theories, like Calvin Wimbish, who retired as a colonel after 33 years in the Army, including as a Green Beret, and is running for Congress in Florida. Wimbish told Florida Politics that he believed Donald Trump was the true winner of the 2020 election. “I believe that he had the right to win based on the truth of what should have been,” he said, arguing that voting machines had been hacked to delete Trump votes—a claim that is not backed up by evidence. Others have clearly stated that Joe Biden is the legitimate president but have promoted the false narrative of widespread voter fraud or other irregularities.

Many candidates had notable careers in the military before turning to public office. Wisconsin gubernatorial candidate Tim Michels, who said at a candidates’ town hall this summer that there “certainly was [voter] fraud” in the 2020 election, commanded the Tomb of the Unknown Soldier and the ceremonial Honor Guard during his time in the Army. Mark Green, who is running for reelection for his House seat in Tennessee, served as a special operations flight surgeon after graduating from West Point and was part of the team that captured Saddam Hussein. Green voted to object to certifying electors from Pennsylvania and Arizona on Jan. 6.

While Americans’ trust in the military has declined, it still towers over the nation’s faith in Congress—a Gallup poll this summer showed that 71% of Republicans and 67% of Democrats had a great deal or a lot of confidence in the military. For Congress, those numbers are 5% and 10%, respectively. Both Republicans and Democrats have looked to capitalize on Americans’ trust in the military by recruiting veteran candidates, though veterans tend to run as conservatives. This year, veteran candidates made up about 17% of candidates in congressional primaries, with nearly three-quarters of them running as Republicans.

Some of the loudest veteran voices denying the election did not advance past the primaries. Eric Greitens, a former Navy SEAL who ran for the Missouri Republican Senate primary, frequently promoted false claims about election fraud. Greitens’ campaign made headlines this summer after he released an ad in which he carried a shotgun, surrounded by men in military gear, and told viewers, “Today, we’re going RINO [Republican in name only] hunting. … There’s no bagging limit, no tagging limit, and it doesn’t expire until we save our country.” Greiten lost his Senate primary bid.

Yet some conservative veteran candidates who advanced to the November election continue to use combat-themed campaign rhetoric and imagery, and often frame their political ambitions as a continuation of their service. In a campaign ad on his website, J.R. Majewski, who is running for Congress in Ohio, walks towards viewers, holding a semiautomatic rifle. “I’m willing to do whatever it takes to return this country back to its former glory,” he says. “I will hold my own and demand that once again, America stands independent and strong, like the country that I fought for.”

In a video for a political action committee that supports SEALs and combat veteran candidates, Ryan Zinke, the former secretary of the interior under President Trump and a former Navy SEAL who is running for Congress in Montana, says, “As SEALs and combat veterans, we took a blood oath to support and defend the constitution against all enemies, both foreign and domestic. Today we face our most important mission: defeating Nancy Pelosi and her radical liberals in Congress.”

Several political action committees recruit conservative special operators and combat veterans in particular to run for office. There are at least five former Navy SEALs, including Zinke, and three former Green Berets on the ballot who have raised doubts about the security of the election, as well as over two dozen combat veterans—though two candidates have recently been accused of exaggerating their combat experience: Majewski and Tyler Kistner, a congressional candidate in Minnesota. Diego Morales, who is running for secretary of state in Indiana, has been accused of exaggerating his military service generally.

Some of the veterans on the upcoming ballot tout their military record specifically to try to add legitimacy to their false claims about the 2020 election. Doug Mastriano, who is running for governor of Pennsylvania, often refers to his lengthy military career as an Army intelligence officer. He shared images of himself in uniform so often that the Army reached out to his campaign in August to remind him of a Department of Defense regulation that political candidates shown in uniform must include a disclaimer that they are not endorsed by the military.

The day after winning his 2020 state Senate race, Mastriano penned an op-ed demanding Pennsylvania Secretary of the Commonwealth Kathy Boockvar resign immediately for what he called her failure to secure the election.

“I spent 30 years in the Army defending American freedoms, including the right to elect our representatives,” Mastriano wrote, saying he had repeatedly raised questions to Boockvar about election security. “I shared my concerns that elections in Afghanistan, in my experience, are more secure than elections in Pennsylvania.” He did not question his own election night win.

This War Horse investigation was reported by Sonner Kehrt, edited by Kristin Davis, fact-checked by Ben Kalin, and copy-edited by Mitchell Hansen-Dewar. Headlines are by Abbie Bennett. Prepublication review was completed by BakerHostetler.