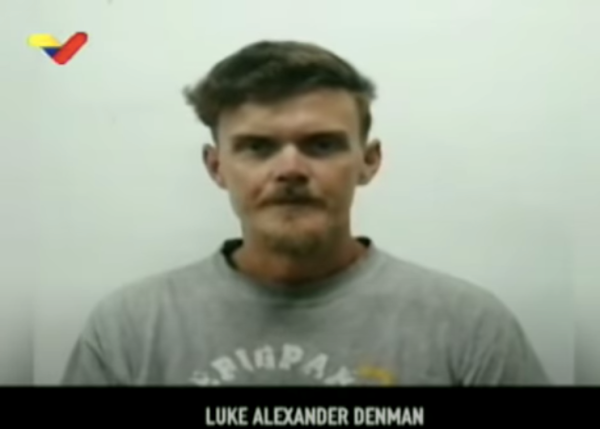 One of the two Americans captured by the Venezuelan military as part of a failed plot to capture leaders of the country’s socialist regime said in an interrogation that the aim was to take control of an airport near Caracas, apprehend Nicolás Maduro and put him on a plane bound to the United States.

Shown in a 10-minute edited video, Luke Denman, a 34-year-old U.S. Army veteran, also said that he had expected to receive between $50,000 and $100,000 for a job that was part of a contract between private security firm Silvercorp USA with Venezuelan Interim President Juan Guaidó.

In the video, in which Denman appeared calm and without visible signs of mistreatment, the captured veteran said the contract for the job had been signed by Guaidó, Miami-based Venezuelan political consultant J.J. Rendon and Silvercorp owner Jordan Goudreau.

When asked who controlled Goudreau, Denman answered that it was President Donald Trump.

Both Guaidó and Trump have denied having any links with the military insurrection that sought to promote a democratic transition in Venezuela by capturing Venezuelan regime leaders accused by Washington of running a drug cartel on the side.

Guaidó is seen as the legitimate president of Venezuela by a coalition of about 60 countries led by the United States.

Denman, who was captured over the weekend along with another American veteran, Airan Berry, and about a dozen Venezuelan military insurgents, said that he played two main roles in the plot: to train the former Venezuelan military personnel participating in what was called Operation Gideon, and to participate in the initial wave by securing an airport inside Venezuela.

“I was to meet Venezuelans in Colombia, train them and come with them to Venezuela to the city of Caracas and to secure the airport here, to use it,” Denman said in the video of the interrogation shown by Venezuelan state television.

In another part of the interrogation, he added: “The only instructions that I received from Jordan [Goudreau] was to ensure that we took control of the airport for safe passage for Maduro and receiving airplanes.” The job was “securing the sector, establishing our own security and establishing communications with the tower, bringing planes, one of which was to put Maduro on.”

Maduro, along with other top leaders of the regime, are accused by the U.S. Department of Justice of running the Cartel de los Soles, and there are rewards as high as $15 million for information leading to their capture.

Denman said that he trained about 60 people in Colombia spread between three different groups of about 20 each.

The Venezuelan exiles behind the operation claim that up to 200 former Venezuelan military personnel were involved in the insurgent movement, but it is not known how many of them have gone back into Venezuela.

Leaders of the insurgency movement said that they had decided to pull back and regroup after realizing that an internal leak had compromised operations and led to the capture of 20 of their members, including the two Americans.

The Venezuelan regime said Sunday that it had killed eight “mercenaries” and captured another two, all belonging to a group trying to land in the beach town of Macuto, 19 miles north of Caracas, and on Monday it announced that it had captured another eight on the coast of the western state of Aragua.