Welcome to ‘The Barracks,’ the new Georgia jail unit just for military veterans

'The Barracks' is believed to be the first housing unit targeting veterans that has opened inside a metro Atlanta jail, but it joins the larger trend of finding creative ways to help veterans caught up in the justice system 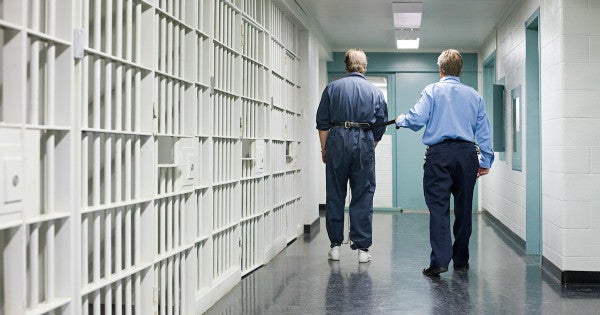 He crumples up the bag and, arms flush with colorful tattoos, welcomes a reporter to the table he's sharing with two other incarcerated veterans.

Cleveland, 37, admits that he's done plenty of wrong in his life. His current stay at the jail is the result of the latest in a lengthy string of arrests; the accrued offenses range from disorderly conduct and drug possession to family violence-battery. He is, as he puts it, in the dregs of his life.

“I just feel like I don't know what to do with myself when I'm on the outside,” he says.

But Cleveland has done good, too. He was in Marine Corps basic training when the Twin Towers fell. He worked on aircraft and served his country in a time of war. It was the best, most meaningful time of his life.

Like a growing number of similar initiatives across the country, The Barracks is aimed at reminding Cleveland of what all that was like — and giving him a better chance of success when he gets out.

Gwinnett's program is believed to be the first housing unit targeting veterans that has opened inside a metro Atlanta jail, but it joins the larger trend of finding creative ways to help veterans caught up in the justice system.

According to the National Institute for Corrections, there are now more than 120 American prisons and jails that have separate cellblocks dedicated to veterans. Many have been added in recent years.

Most are in prisons, where inmates have already been convicted of their crimes. The addition of similar offerings at places like the Gwinnett County jail — where most inmates are still awaiting trial — marks a step toward intervention at even earlier stages in the system.

Gwinnett's program just launched last week and it's still getting ramped up. There will soon be extra programs and services to help incarcerated veterans like Cleveland and his four dozen counterparts get their lives together.

If nothing else, Cleveland says, he's been given a fresh dose of hope and a reminder that he's capable of good things. The camaraderie, the structure, the extra bit of respect and acknowledgement he's already been afforded all go a long way.

“I think it shows that my country does care about me,” Cleveland says.

One of the other inmates at the table chimes in.

“Amen,” says Shane Smith, who served in the Army infantry during Desert Storm. “This place is a blessing.”

The Barracks was the brainchild of Chief Deputy Lou Solis, a retired Army Ranger who joined the Gwinnett County Sheriff's Office about two years ago.

“While some veterans go on to make less honorable choices later in life, their contributions to our national security are no less valuable,” Solis wrote in an emailed statement to the AJC. “We are committed to helping these veterans get their lives back on track by creating a program to provide them with resources to increase the likelihood they won't return to jail once they're released.”

Such initiatives aren't unheard of, but they're not exactly common either.

The Georgia Department of Corrections launched its “Veterans Honor Dorm” program at three state prisons in 2014. The Muscogee County Sheriff's Office in Columbus is believed to be the only other county jail in Georgia to have a separate housing unit for military veterans.

The thought process, generally speaking, is that separating incarcerated veterans from the general jail population and putting them together helps them cope better.

In Gwinnett, residents of The Barracks are given special tan-colored jumpsuits that include the name of the housing unit (most other inmates wear green). They're separated into “squads” that are given extra responsibilities, mostly housekeeping-type duties like serving meals and cleaning. They have meetings every morning with their supervisors and are given an open floor to discuss any complaints or ask for things necessary to complete their tasks.

The combination of respect and structure can take troubled veterans back to their time in the military — a period often filled with trauma, yes, but one that also came with a bigger, greater purpose.

“It feels like I got a good time in my life back, right this minute,” Cleveland says.

GRIP, or Gwinnett Reentry Intervention Program, is an existing sheriff's office initiative that partners with the United Way of Metro Atlanta to provide services to inmates leaving the jail — things like housing, transportation and job assistance to increase the odds of success upon release. The recidivism rate for GRIP participants is just over 8%, about 60% lower than that of other inamtes.

GRIP will play a large role in helping inmates in The Barracks. Other more specialized groups will also be brought in to discuss — and help treat — things like trauma, PTSD and substance abuse.

Officials say The Barracks has thus far not required any new funding. But the agency is actively seeking grants and other avenues to provide as many services as possible.

“It sounds kind of funny,” says Sgt. Jacob Baird, the sheriff's office's GRIP coordinator. “But we do want to be that supportive network for people who may not have one. As long as it's moral, ethical and legal, the sheriff has been very clear he wants us to try and do it.”

'Something out there for me'

The reasons that veterans find themselves wrapped up in the justice system are many, but they often boil down to three factors: PTSD, substance abuse and general struggles to readjust to civilian life.

A 2015 paper from the federal government's Bureau of Justice Statistics suggests that veterns make up about 8% of the country's prison and jail populations. In Gwinnett, sheriff's office officials estimate that, at any given, there are 50 to 60 confirmed military veterans in the local jail.

The Barracks has room for 70.

“Many of these men have not felt a sense of pride in a long time,” said sheriff's office spokeswoman Deputy Shannon Volkodav. “Many of them have not heard anyone express appreciation to them in a long time. And many of them may not have been told that they have value.

“Even when you make mistakes in life, you still have value. And you can still turn things around.”

That's an important message for any inmate to hear, Volkodav said. But the sheriff's office is thanking the veterans in The Barracks by going the extra mile for them.

He admits he's said many times that he's going to clean up his act. But he's inspired now, less depressed and more hopeful. A little help could change everything.

“This has showed me that life still has something out there for me. It really does,” he says. “I don't have to live like I was living. For once, I'm gonna get out and try something different.”